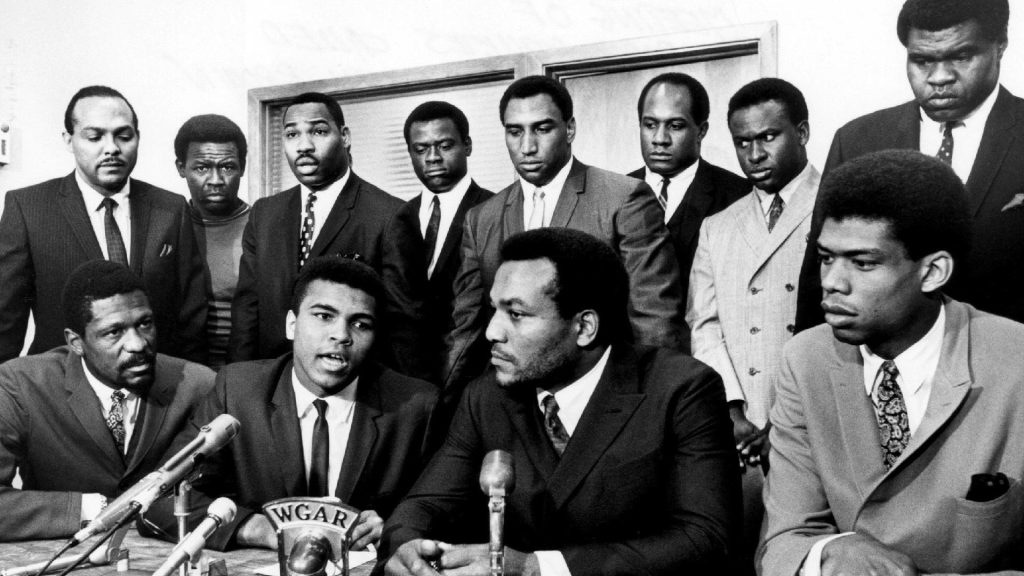 In 2021, Naomi Osaka would withdraw from the French Open. The decision drew much debate among athletes and spectators alike. Her reasoning, simple; mental health. The athlete has since been using her voice to speak out about the realities of depression and anxiety. This is another case of an athlete using their voice for a righteous cause. Athletes make great activists because of their influence and platforms. Here are 10 athletes who did so.

Once told to “shut up and dribble” by Laura Ingraham, Lebron is perhaps the most popular active athlete on earth right now. In addition to being an ambassador for the NBA, he is also the one of the most active outside the game. James uses his game to speak out against police brutality as his Cavaliers donned the “I Can’t Breathe” t-shirts during warmups in 2014. He also founded a school in his native Akron, Ohio, and is heavily involved in operations.

Colin Kaepernick went toe to toe with the NFL and won. Not only in court, but in terms of its culture. For an entire season he would take a knee during the national anthem in protest of police brutality. This act would completely divide the league and the country alike. When he would not be picked up by teams that next off season, he would take the league to task citing collusion.

Jim Brown is regarded as one of the 5 greatest NFL players ever. He was one of the toughest athletes in the history of the game, holding the all – time leading rushing title for almost two decades. He would flip his football career into a career in film as one of the leading actors of the Blaxploitation era. Off the field and off – screen, he was a strong voice during the civil rights movement, and an advocate for education. He also founded the Black Economic Union in 1968, an organization which would promote black entrepreneurs.

Kareem Abdul – Jabbar, a six – time NBA MVP athlete, and all – time leading scorer was a voice during a transitional period in the NBA. A black Muslim at a time when both were not seen favorably, Kareem would always stand his ground against racial and religious injustice. He would famously refuse to participate in the 1968 Olympics due to the country’s racial climate. After his playing career, the legend would go on to be named US Global Cultural Ambassador.

The Tennis icon was one of Tennis’ early voices for social justice. He would famously march against the Apartheid injustice of South Africa. He also stood against mistreatment of Haitian refugees. Ashe is well known for his demeanor, and how he used discourse to handle issues of injustice.

From one tennis legend to another, Billie Jean King is one of the greatest female athletes of all time. An activist for women’s rights in sports, she would press hard for equal pay amongst male and female athletes in tennis. In 1972 she would take on tennis star Bobby Riggs in the famed “Battle of the Sexes.” She destroyed him, by the way.

The reason for the “ish” in the title is because these two men have ties to one iconic moment. 1968 is undoubtably one of the hottest points in the struggle for civil rights. During the 1968 Olympics, Smith and Carlos who would win the Gold and Bronze respectively in the 200 Meter dash, hit the podium. With the national anthem playing, they would stand on the podium with their fists in the air. Their fists, each with a black glove on it, represented black power. They also would stand barefoot to protest the poverty plaguing black communities at that time. The image remains an iconic moment in Olympic history.

The inspiration for this list, Bill Russell’s basketball journey is a coin; two sides, two stories. On one end he’s a legend in the Boston area, helping his Celtic teams to 11 championships in 13 years. On the other end, the same people who would cheer, once the game ended hurled the “N” word and would vandalize his home. He pushed for civil rights while being denied entry into hotels. As one of the league’s best, he couldn’t sit in the some of the same spaces as his teammates. He would consistently push back on these injustices, leading player protests. He would stand with leaders like Dr. King and Muhammed Ali, as a prominent voice during the civil rights movement.

In 1947, Jackie Robinson would become the first black player to play in the Major Leagues. That fact can stand alone and make Robinson one of the most important figures to the civil rights struggle in America. However, he would go on to dominate the sport. In addition to this, he would work collaboratively with the NAACP and SCLC. (Southern Christian Leadership Conference) An active participant in many civil rights marches, Robinson’s philosophy mirrors that of Dr. King’s peaceful ideology.

Muhammed Ali tops our list for a number of reasons. He famously and explicitly told a white student “…no Vietcong never called me no nigger,” in reference to his anti – war stance. The next thing out of his mouth would sum up his sentiment “… you are my enemy.” He would forfeit his world heavyweight championship after his draft refusal of the war. Ali would place the battle against racism and injustice at home ahead of everything else, even his own meal ticket.