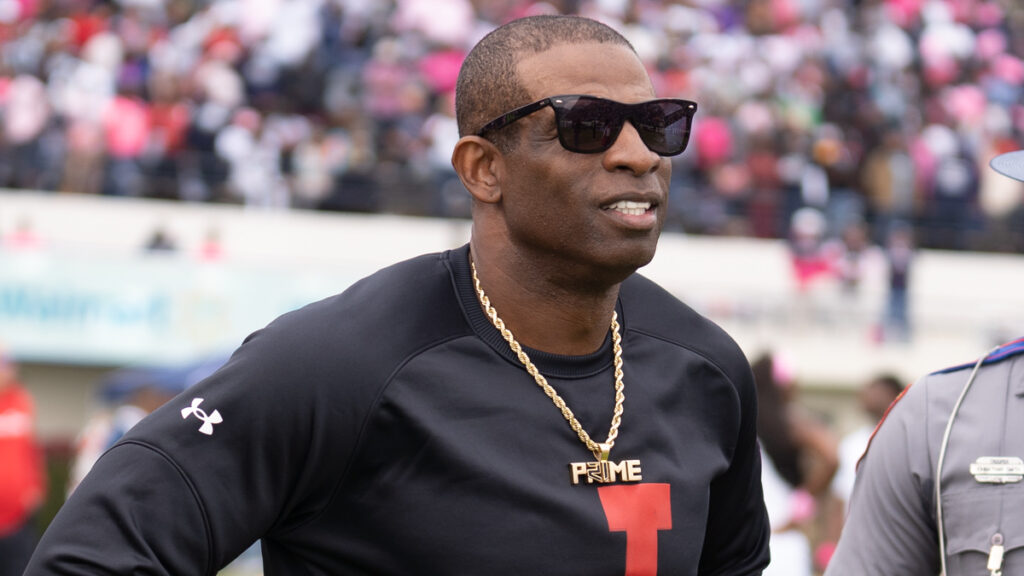 After winning the SWAC championship, Jackson State University Coach Deion Sanders announced his plans to leave the University. Heading to the University of Colorado, the announcement has divided the black community. On one end, the thought is that he’s in some ways a traitor by choosing the money over the culture. On the other end, there’s the thought that he’s a grown man and has the right to take a higher o paying job. This divide runs deeper though, so let’s examine.

Deion Sanders, the man, is a trailblazer. The man that would tell the New York Giants that he would not take a written test for them because he wouldn’t around at the 18th pick. (He went 5th overall.) The man moves with swagger, but what most don’t know is how methodical he is. The “Primetime” gimmick would be his plan to escape poverty, and keep his mother from ever working again. The gimmick was born in his college dorm during his tenure at Florida State, years prior to the world’s first introduction to him. This is a man of vision, and man that doesn’t operate on chance.

As a matter of fact his acceptance of the job at JSU was done with thought. As a member of the Pro Football Hall of Fame, it is not like he didn’t have options. He understood the mission, and what he was he was there to do. During his tenure, the HBCU would land a top recruit, gain more exposure than ever, and receive massive upgrades to their football facilities. Like everything else in the man’s life, it was all apart of the plan.

Taking the job, with other options nonetheless, works in Coach Sanders’ favor here. The greatest defensive back ever going to an HBCU, which to its credit has very notable alumni in the form of NFL greats, is a big move. He’d take the job, in an underfunded football program, with very little resources. More than the aforementioned upgrades, he helped establish a culture. The idea of an HBCU landing a top recruit would be probably sound insane prior to Coach Prime. It essentially sets a precedent. It creates a culture. HBCU’s are already loaded with culture, but much of this culture remains beneath the surface of American culture. Having the bands feature on ESPN in prime time, along with the game is a taste of the culture that America is not quite used to.

All of this happens because of Coach Sanders’ star power. He used this to gain notoriety not just for Jackson State, but for other HBCU’s as well.

Setting a precedent is the real key here. Even upon leaving, Coach Prime have the blueprint, and now the spotlight. Eddie George, another NFL legend, would accept a position at Tennessee State as head coach, so clearly Coach Prime’s has led to others. And it wouldn’t be crazy to say that this trend will very likely continue. Coach Prime’s departure has led to the spotlight remaining on Jackson State, but more in the sense of “…where do they go from here?” This spotlight gives not only the school, but other HBCU’s the opportunity capitalize on the attention.

ESPN’s Boomani Jones would state, “He sold a dream and then walked out on that dream.” Despite Sanders stating in an interview that he’d entertain an offer from a Power 5 school, much stock would sit upon his shoulders. He would be positioned as face of HBCU football for what appeared to be the long run, which is why his leaving bothers many. The sentiment is that his departure is him not sticking around and remaining a face for HBCU football. The expectation is that he at least stays around and help us build our own on the back of his star power. With this said, it the general sentiment is that he has left not only on HBCU football, but on US.

Whatever your stance here, Coach can do what he wants. His massive upgrades to the school, star power, and culture building have gone further in two years than any previous efforts. It’s also not as if he violated some principle; he would bring a SWAC Championship, finishing what he started. At the end of the day, we must look at the standard set and progress from there. Coach has done more than enough, we can let him get paid.