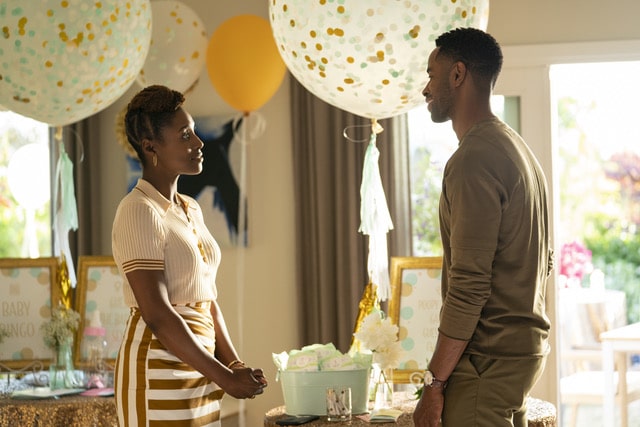 On the latest episode of HBO’s Insecure, we were treated to the reunion years in the making: Lawrence and Issa.

The former couple – played by Jay Ellis and Issa Rae, met for an evening full of tough-yet-needed conversations. The night began with Issa falling in front of an entire bar, hard talks over dinner, flirty art walking, and ended with an empowering walk-of-shame. The episode offered a deep look into Issa and Lawrence’s fallout, with powerful confessions and unapologetic honesty.

Here are five takeaways from the series’ most romantic episode yet:

Lawrence is still grappling with the process of moving on.

Lawrence is definitely in a better place since their breakup at the end of Season 1. He went from being unemployed to getting a stable job, with potential for a new one in San Francisco. But, there were several indicators that Lawrence might still be stuck on a lot of old situations.

“Do I give up too easily on things?” Lawrence asked Issa. The entire evening was his idea, deriving from the previous episode where he ran into Molly at the airport before calling Issa to meet up for dinner. He must have been trying to plan this night for a while, so it is clear he has been thinking about how things ended with Issa.

Throughout the episode, his most recent ex-girlfriend (and former bestie of Issa) Condola was left on the backburner. Through texts, we saw that the two were texting about meeting up, but Condola wanted to bump those plans up to that particular evening, of course. Lawrence kept her hanging by a thread, telling her he might stop by one moment after the other. Even though the two were broken up, was he trying to not give up on Condola “too easily?” Maybe he wanted to have a similar discussion with Condola about what went wrong with them.

With a possible move to San Francisco on the horizon, Lawrence is seemingly taking all the routes to reassess his life in Los Angeles and his life with Issa. What he does with this information is yet to be seen.

Open and honest communication is key!

Before sitting down for dinner, Lawrence made a declaration that set the tone for the rest of the night:

“Let’s not do the tip toe sh*t tonight. No egg shells. We know each other too well for that.” he stated.

Following that, the honesty spilled out. Lawrence admitted that he wonders “what would’ve happened” if they never broke up.

“I do wish you hadn’t given up on us,” Issa replied.

Then they went into the discussion about Issa’s infidelity. Lawrence asked Issa why she cheated with Daniel. Issa opened up about Daniel giving her the attention Lawrence was not giving her, saying that “it felt good to be wanted.” She followed up by blatantly telling Lawrence that she felt as if he didn’t want her anymore. She also admitted that she would drive around sometimes to avoid coming home.

Lawrence then began unpacking what he was going through at the time. He was unemployed and explained that watching Issa go to work everyday while he had nothing to do made him sad, and seemingly was the root of the resentment and distance between the two. He also admitted he thought about going back home during this rough patch.

“Why didn’t you tell me?” Issa asked. This could have been what saved their relationship had they been this vulnerable and communicative before. It was a powerful ask that pretty much answered any questions about why things didn’t work out.

Lastly, a big realization settled in as Lawrence confirmed that he did, in fact, by Issa an engagement ring.

Lawrence pokes at the open wound of Issa and Molly.

Lawrence told Issa early in the night that he saw Molly, but Issa cut the conversation short, telling him that they aren’t best friends anymore.

He laughed before realizing that she was serious. It was very obvious in this moment that even Lawrence knew that something was not right, and that Molly was once an integral part in her life as was he. He definitely asked what happened, Issa did not want to get into it, and then she changed the subject.

Since it seems like Lawrence is maturing and discussing the relationships that went wrong in his life, Issa may be thinking about having that much-needed conversation with Molly about why their friendship deteriorated the way it did. The preview for the next episode shows that in fact, Issa initiates that exact conversation.

Issa’s growth is evident before and after their nightcap.

While Issa still has to figure out things with Molly, this evening with Lawrence truly displayed the product of all the growth and work Issa has put into herself. Issa and her quirks haven’t changed, (ex. Tripping and falling in a bar full of people) but she is more vocal about what she wants. Issa never once shifted blame, and took full ownership in her role in their relationship’s demise. She is also more confident in speaking her truth. We saw that on full display when Lawrence invited Issa into his apartment. A nightcap was not in their plans, as Lawrence was about to go tend to Condola. Issa overheard him on the phone with her and decided she would take matters into her own hands.

“What if I wanted to stay?” Issa asked. “I’m not ready for the night to end yet.”

“Tonight made me happy.” Lawrence responded.

“You make me happy,” Issa followed up.

This alone made me so proud. She did not want to leave disappointed and pondering what if. So they kissed and then proceeded to make love. No, that’s not just a filler phrase – they made love.

Even the morning after, Issa refused a ride home from Lawrence and proudly walked home in the heels from last night. She looked at peace heading home independently, taking the extra time walking to ponder over what just happened and what it means.

Issa and Lawrence will be good no matter what happens next.

Obviously, this episode alone made me want to see what a Lawrence and Issa relationship would look like present day. They are both matured, creating their own lanes, and free of all their past grievances. The conversation they had on this episode was much needed and freed them both from years of built-up resentment towards each other. It is obvious they still have deep feelings for each other.

If they get back together, it’ll be like Issa and Lawrence 2.0 – the new and improved. Perhaps they will finally get married and live happily ever after. If they don’t get back together, they will be two emotionally equipped adults ready to take what they have learned into something new. Lawrence might move to San Francisco and live happily ever after.

Either way, both of them are better people because of what they shared in their relationship and in this episode.

One thought on “Issa and Lawrence Reunited: 5 Takeaways From The Newest Episode of Insecure”