Where does your identity lie within the revolution? You sleep, you die. You protest or riot, you tried. But if you stay at home, are you getting side-eyed?

Some people are watching these protests that have spanned across the U.S. from home while signing petitions online and calling state offices to demand action. Are those types of millennials still movers and shakers in the world? Or do you have to be a Malcolm, Angela or Stokely to leave behind a legacy?

During this time if you’re Black, you may feel as though you’ve been drafted into a war that you didn’t sign up for. When you’re a revolutionary, you could be looking for your spot on the front lines. As a Gen Z kid or millennial, you don’t want to live in the shadows of generations before you.

And if you’re all three, you’re much like I was— going to what was anticipated to be a peaceful protest, questioning if you would be going home after that night— and if you didn’t, would you be OK with that?

Dion Johnson, 28, was murdered by a cop in Phoenix, Arizona on Memorial Day, Monday, May 25, 2020. Police reported Johnson’s death as a result of a struggle between him and a state trooper. Local activists said Johnson was unarmed and asleep.

In light of that, the police department’s refusal to release the officer’s information and them claiming that there wasn’t any footage from the incident influenced the need for a protest. Black Lives Matter (BLM) Phoenix-Metro organized a peaceful vigil per the Johnson family’s request a few days after his murder on May 29th.

Peaceful protests do exist, despite the narrative painted of Black folks on television and social media. However, it’s clear that they may not always end in peace due to a myriad of factors; police encounters with protestors, undercover white supremacists, etc.

This invokes the question: should all Black activists be willing to protest, ready to lose their lives during a protest and what do people label them if they’re not?

I asked myself this on my anxious 40-minute car ride to the other side of town for the Phoenix vigil. Before leaving my house, I was side-eyed by my mother who also wasn’t vocal about the elephant in the room— the possibility that I may not come back. This peaceful protest blossomed into deep breathing exercises lead by BLM, a heavily ally-attended gathering, and people of all races and ethnicities passing out water bottles and face masks.

Many people gathered for this vigil demanding #justiceforDion and the dismantlement of racially injustice systems and police prosecution. Some protestors showed support with a lit candle in their hand— others did it with those same candles, but with guns strapped to their hips or slung over their shoulders.

Because let’s be honest…these aren’t the most distant kinds of events.

Nonetheless, we were there in solidarity.

However, solidarity in a Petri dish looked under a microscope of loud helicopters “doing donuts in the sky above us,” according to a fellow protestor. We were engulfed in flames of red and blue-lit cars around the perimeter of the park waiting for a call, an “f” the police that seemed too heavily-chested or any type of movement that was just too abrupt.

Everyone knows the possible outcomes for these gatherings that demand change. Do we condemn the people that aren’t in the crowds protesting and watching from home? Some activists want to physically be in the action, while others want to make sure you have bail funds, milk for your mace-laced eyes, new legislation up for community improvements or a hot meal waiting for you at home.

A portion of people is advocating to stop looting and stealing from stores, many rebuttal by saying that “they” stole us. Others beg social media users to stop sharing such triggering and violent videos or photos online, but it’s a necessary evil to bring light to situations that would be otherwise overlooked.

And some, well some, they just don’t look.

Some Black millennials don’t even want to create a legacy (And that’s OK.)

The bottom line about identity, revolution and change? 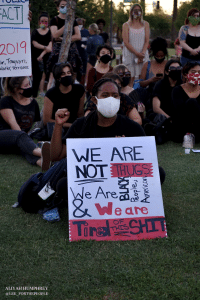 The question isn’t so much ‘what you’re not doing to support’ but ‘how should you’? If you don’t think you want to put your life on the line, here are some options with minimal risk but high impact:

Just ask people what they need and deliver.

“He began to have a dim feeling that, to attain his place in the world, he must be himself, and not another.” 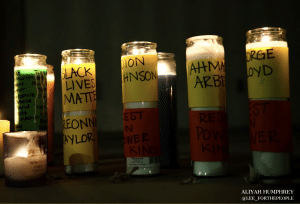 One thought on “Protesting: The Grey Area for Black Millennials”