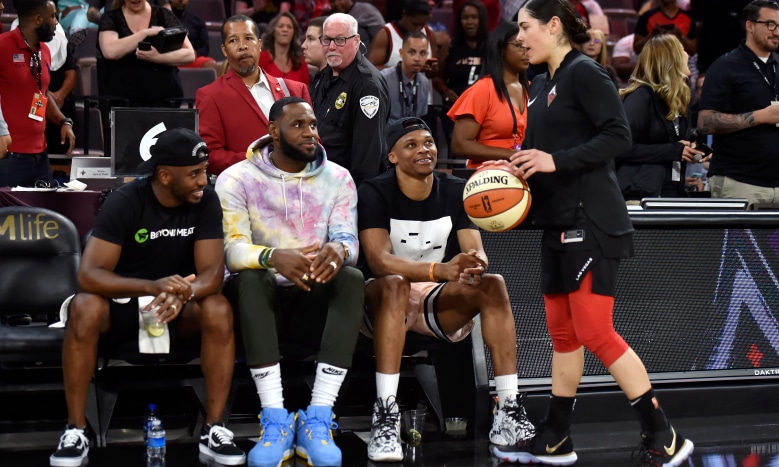 There is no secret that the WNBA does not get nearly as much love or viewership as its male counterpart the NBA. But do not be fooled the WNBA is filled with ballers. In a time where pressing issues are continuously under a microscope, such as equal pay for women, gender equality and the abuse of the patriarchy that is our country. You sprinkle in everyone pandering for approval ratings as of late, if you go back far enough you will find that the women’s movement that has actually been the Launchpad for bringing so many of these matters to the forefront is the WNBA.

Pioneering movements is the first reason the WNBA is a must watch. You are literally watching history manifested! For every women’s right protest, for every insult that you play like a girl, this made those jokers eat their words.

The WNBA is not a “wannabe NBA”, its comes fully furnished with some of the best hoopers on the planet. They come unique with their own stories, which are rarely talked about. They are sneaker savants and culture contributors.

The WNBA deserves our support because they are truly just like us. Most of them have a second job like most Americans. They are not far removed giving back what they can go without. When they give back its truly effort of their time and treasure. WNBA players are brave ballers who feel drawn to this culture but never felt welcomed. Our support is their invitation.

So if the WNBA is filled with sneaker heads, 3-point specialist, harmonizing handles, highlight reeling play, unique narratives, cultural influencers, and fierce competition why is the average WNBA just 413,000 viewers?

The barbershop reason is that the WNBA is the only women’s sports whose uniform are more in liken of the men’s than a customized fit and look more in line with a feminine look.

Basically they think the uniforms are manly. Short shorts might seem like an easy fix, but what type of message would that send? Hey girls, if you want more male attention or views show more skin? Yeah no. If the uniforms started off that way maybe, but it overtly sends the wrong message and can be viewed as objectifying.

Next reason often vomited out is that there are no dunks. The dunk has definitely revolutionized basketball as we know it. In the late 80’s early 90’s dunkers took the NBA to new heights and rare air.

Maybe lower the regularity of the court in women’s basketball would open up that lane for us to see more dunks. The only issue is than we play back into this “I’m better than you” mindset that does not encroach equality. Plus, being able to dunk never made a player better than another. I can name 10 great dunkers who were not great players in the NBA.

Now that the elephant in the room has been addressed and debunked here’s a few more reasons why you ought to be tuning into WNBA games.

There are fewer games, which makes for better competition. Every game in the WNBA counts.

Another reason is, there are no super teams. Teams are far more evenly matched which gives us a NFL type of vibe where the Championship is up for grabs between all the teams every year.

Ladies, if your lobbying for equal pay but not watching the WNBA you’re a hypocrite. We all know the only way WNBA players will ever earn top dollar is if rating and viewership rises.
The Achilles heel is not the WNBA’S men’s audience it’s their women’s audience.

Don’t know any of the players? Here are 3 you need to look out for: Tiffany Hayes plays for the Atlanta Dream and is Dream boat!

Khaleah Copper plays for the Chicago Sky and is from Dilly Dilly! Philly stand up!! She got game, and her dress game is mean too!

Last but not least A’ja Wilson of the Las Vegas Aces. She was the first overall pick in the 2018 WNAB draft. She’s a devote Christian, for the culture Hooper with handles.