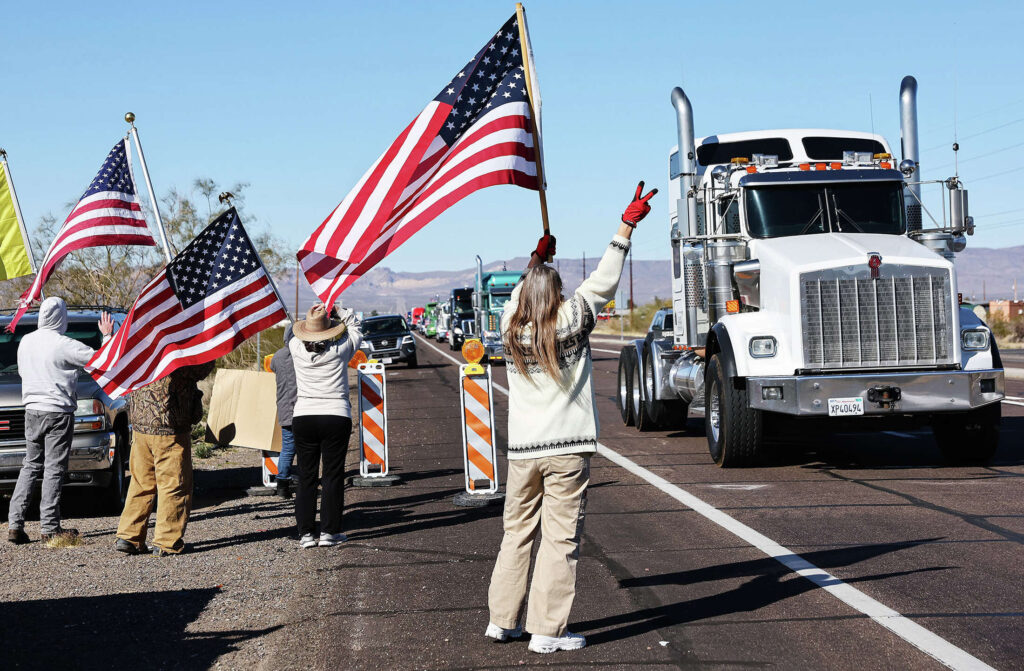 Throughout the country, American truckers have been taking to the roads and highways in a movement called People’s Convoy. This movement is protesting COVID-19 mandates for US workers. So far, it’s garnered support by Senators Ted Cruz (R) of Texas and Ron Johnson (R) of Wisconsin. However, questions surrounding the movement’s longevity are coming to the surface by truckers and onlookers alike.

What is the People’s Convoy?

In a press release to mark the February 23 launch, the group notes that the People’s Convoy movement aims to address the financial toll that COVID-19 pandemic has taken on workers in the US – despite the declining cases and availability of vaccines.

“To that end, it’s time for elected officials to work with the blue collar and white-collar workers of America and restore accountability and liberty – by lifting all mandates and ending the state of emergency – as COVID is well-in-hand now, and Americans need to get back to work in a free and unrestricted manner,” the press release reads.

The group (co-organized by trucker Brian Brase) began its journey in Adelanto Stadium in Southern California. Since then, the People’s Convoy has made its way into states such Missouri, Indiana, Maryland as well as Washington, DC.

The movement hopes to peacefully get their message across. While meeting with leaders and politicians to help make their goal a reality. “This convoy is about freedom and unity: the truckers are riding unified across party and state lines and with people of all colors and creeds,” the press release continues.

Despite this, there have been several bumps in the road which are well-documented on Twitter by  Zachary Petrizzo of the The Daily Beast.

Today The People’s Convoy was defeated by one person riding a bike in downtown DC. pic.twitter.com/gZTYZs1xfl

The Daily Beast has obtained exclusive footage of the March 16th incident on the 14th St. bridge, where after a biker flipped off a truck driver with The People’s Convoy, the biker's head was slammed into the ground — following truckers allegedly stealing his bike keys. pic.twitter.com/QchuIwCkKv

Could This Movement Be Coming to An End Soon?

With the People’s Convoy well into its first month, concerns surrounding its long-term goals and viability are being raised. One element of this stems from the movement’s funding. As of March 26, the group they raised over $1.7 million through the American Foundation for Civil Liberties and Freedom (AFCLF).

The group’s website states that 100 percent of the donations go toward supporting the expenses of convoy. These expenses could include fuel, lodging, food and repairs for the participating truckers as they’re on the road.

Yet Christopher Marston, AFCLF chair, tells FreightWaves that the group has enough money left to continue for about a week as of March 22 due to dwindling donations. “[It’s] not a lot, but the media has slowed down a ton and the truckers are not making the ask for money the way they should, despite training and guidance,” Marston says.

Another concern is truckers heading home due to lack of communication, transparency and action from leaders of the People’s Convoy. According to Vice News, members of the convoy who have communicated via Zello warn that people might “start taking matters into their own hands.” While others reassure that violence of any kind is something they want to prevent altogether.

Regardless, California-based farmer Thomas Traphagan reveals that he and his wife Andrea aren’t abandoning the People’s Convoy any time soon. “We don’t wanna harm anyone, we don’t want to stop traffic,” he says to Vice News. “This [movement] could take a long time.”