For years, society has made the independent woman out to be a villain. I came across this video, and was surprised that the speaker equates being an independent woman to being the opposite of a teammate. By definition, “independent” means free from control, or self-governing. Somehow, the narrative has become women want to dominate or destroy men (insert evil laugh)! Of course, this isn’t true, but here we are. So let’s talk about it.

Words Will Never Hurt Me

Lies and words do hurt, and we see it time and time again. Perhaps, some women are leaning into the independent woman narrative so much that they consciously or subconsciously become a woman who seems anti-man. She’s portrayed as aggressive and bossy.

Do some of these catchphrases sound familiar?

This is the woman that society recycles over and over through media.

This is not healthy behavior. Nowhere is there good communication or a balanced partnership. Yet, this defines what culture calls an independent woman. Strong-minded women don’t need to be in control of everything, or have to belittle men to get what they want. Some women may act like this, but it’s not necessarily indicative of an independent woman. It is the behavior of that woman. The media often perpetuates these over-the-top mannerisms, so it makes sense that people may equate them to an “independent woman”.

If this is the imagery pushing to the front when referencing a strong-willed woman, we end up with some men saying they don’t want independent women on the other end of the pendulum. Why? Because now they view us as a threat and they can’t see where they fit in the relationship.

For example, in the video above, he’s clearly enthusiastic about this topic. Conceptually, I think we can all see what he’s trying to say. But it recycles the old narrative that something is wrong with women for wanting more for themselves. You can be an independent woman, and a teammate, a partner, a friend, or whatever. You can build a family, wealth, and all the things with your man and still be strong. Women are not monoliths. The actions of one does not represent all. There’s no need to fear or try to control us.

The interpretation of what an “independent woman” means from a male perspective often puts their insecurities on blast. In a world where everyone is an expert, there seems to be a lot of male dialogue around what women should do. There are benefits to hearing from men in order to gain their perspective because men and women tend to think differently. However, if the dialogue faults women and lacks nuance, then what are we doing? 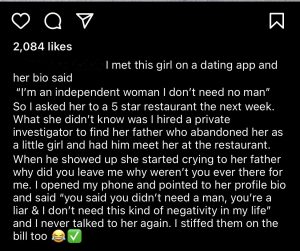 Look at these captions. This nonsense is not acceptable and, one could argue, that they hate women. Being an independent woman doesn’t equate to being alone. Nor does it mean we should be ridiculed. We still need love, support, trust, and honesty.

Positive Qualities of an Independent Woman

It’s time to stop perpetuating narratives that vilify women who view themselves as independent. There’s nothing fearful about her. Being an independent woman is not one-sided. It’s about knowing what we want, healthily communicating that, and balancing that in our relationships. And if there isn’t a balance, it’s also ok to walk away. It’s ok to take care of ourselves.