Multiple accusers testified in explicit detail during the trial, alleging that R. Kelly subjected them to perverted and sadistic acts when they were underage.

The “I Believe I Can Fly,” disgraced singer was convicted Monday in a sex trafficking trial after decades of avoiding jail time for numerous allegations of misconduct with young women and children.

A jury of seven men and five women found Kelly, guilty of all nine counts, including racketeering, on their second day of deliberations. 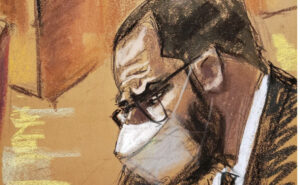 Federal prosecutors in New York successfully proved R. Kelly had been the head of a criminal operation which was to lure girls, boys and women to the R&B singer for his sexual pleasures.

Kelly also has outstanding criminal charges in both Cook County, Illinois and Minnesota as well. In Illinois, he was indicted by the state attorney in back in February 2019 for aggravated criminal sexual abuse involving four victims(three of them minors). In Minnesota, he is charged with engaging in prostitution with a minor in August in 2019.

Social media shared their thoughts and opinions after R. Kelly was found guilty in his racketeering and sex trafficking trial. 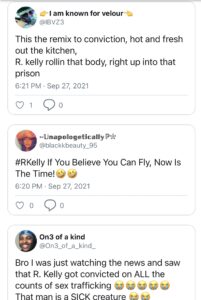 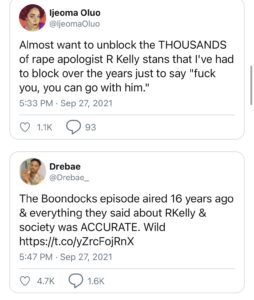 R. Kelly is facing a mandatory minimum of 10 years in prison but could be sentenced to life behind bars.

Sentencing will take place on May 4, 2022. However, R. Kelly’s defense is considering filing an appeal in the case.