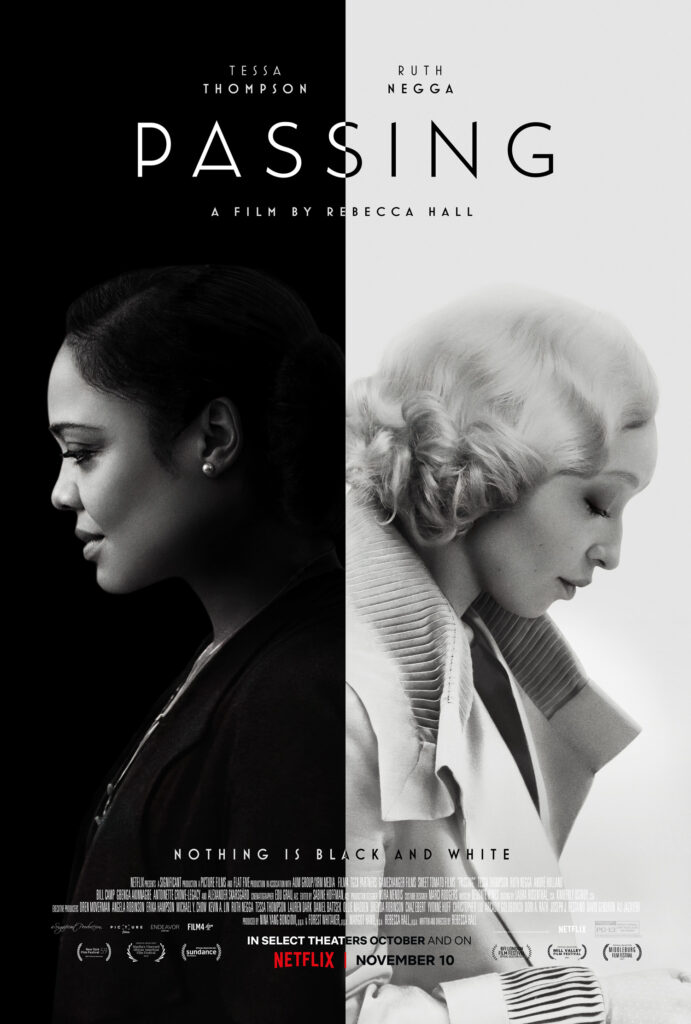 Based on the 1929 novel by Nella Larsen, the film Passing centers Irene Redfield and Clare Kendry. Both are two women navigating the waters of “passing for white” in 1920’s Harlem. The story takes on the fateful journey of identity, love, status, and the practicality of freedom. Passing will shake you to the core. are just a few things you should know before watching:

The entire film is in Black and White

Admittedly I had flash backs of last years controversial “Malcolm & Marie”. This is a very specific choice that directors defend meticulously yet doesn’t always go well with audiences. However, in Passing, this proved a perfect choice for the subject at hand. The topic is race, something Americans have corroded as a binary event. Yet what lies beneath the binary is much more complicated than others allow for. Director Rebecca Hall brilliantly makes this decision as a statement of irony.

For years there have been outcries for films centered around blackness to be directed by individuals actually identifying as such. Far too often we are experiencing entertainment through the lens of someone else’s shallow interpretation of culture. The divide is glaring once we see how many oscars have been awarded at the cost of sheer mockery. While we know this to be a valid critique, this film may provide an exception. In a recent interview, Hall notes her personal attachment to the Nella Larsen novel. Hall’s maternal grandfather was a Black man passing for White in Detroit, Michigan. While Rebecca works with her mothers memories she also lives as a direct result of ethnic erasure. One would be curious to see how her own background colors her directorial choices. She also collaborated with Tessa Thompson and Ruth Negga. Both execute award worthy on screen performances that critique how deeply race affected the mind of humanity.

Ruth Negga and Tessa Thompson have an undeniable chemistry

After years of separation, Clare Kendry (Negga) reconnects with her childhood friend Irene Redfield (Thompson). Irene chooses to maintain her identity as a colored woman in 1900’s Harlem. However she soon learns of Clare’s oddly immortal life as a Black mixed-race woman passing for White. Ruth Negga so effortlessly embodies the delicate downward spiral of an identity crisis. Tessa Thompson compliments her character with silent disillusionment. The two create a flawless duet of passion, envy, and sacrifice that forces the viewer to crawl within oneself and question their own inconsistency. The on screen chemistry is reminiscent of the famed Matt Damon and Ben Affleck bromance – but better.

The most stunning aspect of the film is how closely related the themes are to present day. How do we perceive ourselves according to class and financial stature? How do we navigate our personal lives and deal with the consequence of inevitable dissonance? This movie beautifully guides the viewer through these questions. Passing will shake you to the core.

Passing premiered in select theaters October 27th and will be available to anyone with a Netflix password Wednesday November 10th, 2021.