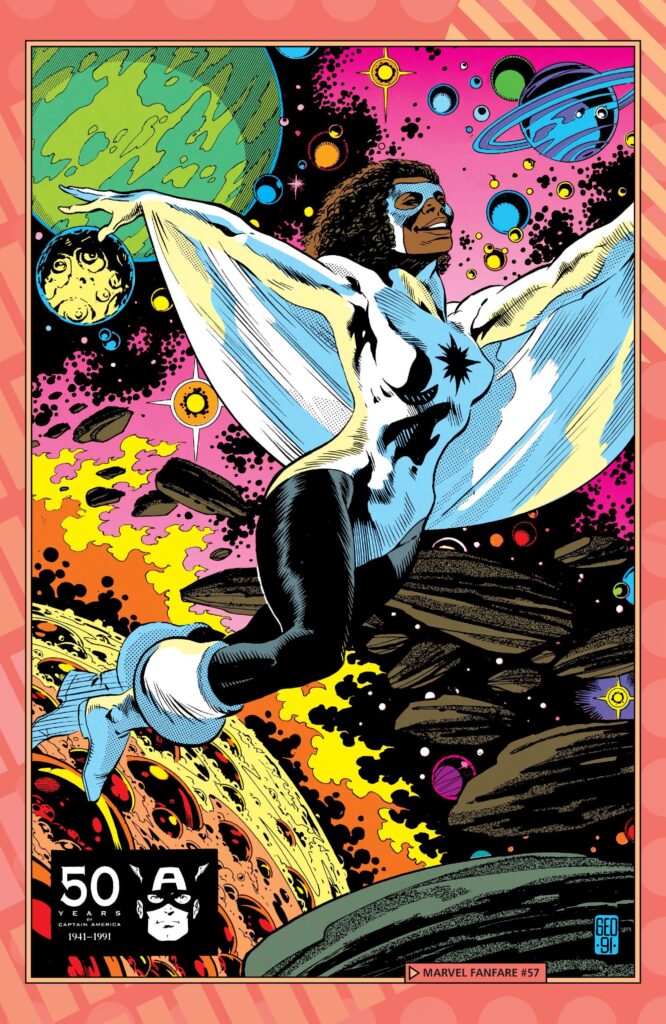 The large emergence of Monica Rambeau in Disney plus’s WandaVision played by Teyonah Parris  has been a huge success thus far in the Marvel Cinematic Universe. With the abundance of female character stories we are getting including Black Widow, Wanda Maximoff, Carol Danvers. You can only assume this can mean that Rambeau will be a huge proponent of the future moving forward. Parris has done a spectacular job being able to channel the character that has existed since the early 1980s. So let’s go back in time to check out how this fantastic heroine came to be.

The Creation of Monica Rambeau

Firstly, Monica Rambeau was created by Roger Stern and John Romita Jr who have both had extensive work with Marvel comics for a long time. This character was intended to be a superheroic version of the beautiful Pam Grier because they were huge fans of the Hollywood star. Her first appearance appears in The Amazing Spider-Man Annual #16 after her debut. Captain Marvel appeared throughout the entirety of Roger Stern’s five-year run on The Avengers. Rambeau then became the team’s leader, and later made numerous appearances as a reserve member after she departed from active duty.

Rambeau wasn’t the first Captain Marvel she the first human ever to go by the name. The original Captain Marvel was Kree: Mar-vell who was The Captain Marvel. Then he had a son, Genis-Vell, who actually is the one Monica gives the name Captain Marvel back to when she suddenly decided to go by Photon. Monica then switches up and goes from Photon to Pulsar because Genis-Vell decided on the name Photon a time later after deciding to live a life separate from his father. This is separate from the MCU’s version of the character which is a crime in my opinion from a story perspective.

The Origin of Monica Rambeau

Rambeau’s origin was first told inThe Amazing Spider-Man Annual #16 with her birth place being from New Orleans, Louisiana to Frank and Maria Rambeau. She was a lieutenant in the New Orleans harbor patrol and operated as a cargo ship captain. To prevent the creation of a dangerous weapon, Rambeau was exposed to extra-dimensional energy. She was thereafter able to convert her body to energy. Not to long after this the media gave her the moniker “Captain Marvel”.

Monica Rambeau is one of the most powerful characters in the Marvel universe. Rambeau can transform herself into any form of energy within the electromagnetic spectrum. In many of her abilities she can control cosmic rays, gamma rays, X-rays. She can also project ultraviolet radiation, visible light, electricity, infrared radiation, microwaves, radio waves, and neutrinos. By assuming an energy-form, she gains all of that energy’s properties. Because of this she can be invisible and intangible in many of her energy forms and is capable of flight in all her energy forms.

Rambeau also can project these energies from her body.While she is in human form, usually in the form of energy blasts from her hands. She can also divert small amounts of various energies for employment as force beams. This has the equivalent of 300 tons of TNT of explosive force. A variation of this ability enables her to project light-based holographic illusions of herself. There has been times were Monica has shown the ability to split her energy form into several miniature energy forms. They are under her mental command, each miniature Rambeau can react and fly at light-speed. She is immortal and does not age beyond her prime.

In conclusion, Monica Rambeau being the strong character that she is will be a great addition to the future of the MCU.This show will continue to show her epic ness and give people all they want. Be sure to read up on Monica if you can because her stories are blazing ! Hopefully down the road we will continue to get more and more appearances from “Captain Marvel”.