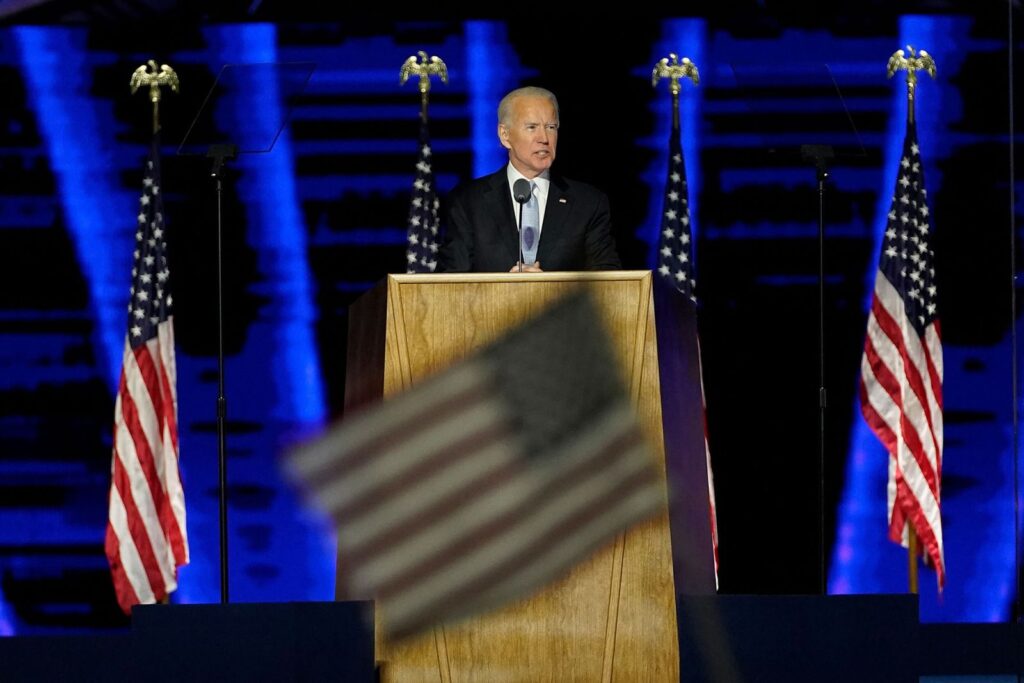 The 2020 United States Presidential Election has been one of the most dramatic political sagas in modern history. The coronavirus pandemic, the anxious tallying of millions of mail in ballots, claims of voter fraud and suppression, the administration of the most polarizing American president in history on the line, the oldest candidates ever on the ticket, the economy in limbo, and the world holding their breath with the rest of us—it all came to a head in a way many never would have imagined.

Voters turned out in record numbers for both candidates, resulting in the highest votes for any presidential bid. Votes are still being counted in a few states; however, Joe Biden was the projected winner in Pennsylvania which clinched him the victory and he was declared President Elect of the United States on Saturday, November 7th—four days after election day.

To say the campaign was contentious would be an understatement. The coronavirus pandemic complicated just about everything, but clearly American citizens were determined to make their voices heard. Supporters for each candidate felt very strongly that their choice for president would map the future America needs. Quite frankly, stakes were high.

As we receive exit poll data on the scope of this election, it’s important to acknowledge what the landscape of these voting statistics reflect about Americans. Particularly for voters of color. Black voters, as in recent elections, voted primarily for the Democratic candidate. However, according to CBS news exit poll analysis, Biden underperformed with Black voters from the 2016 election by 2% while Trump over performed by 4%. Trump actually lost some of his core supporters to Biden, white men and the elderly, while making gains among communities of color, particularly among Black men.

This small but surprising shift among Black voters is more rooted in their frustrations with the Democratic Party than with the President Elect. The Black community is unsatisfied with the unfulfilled promises from the people who campaign for their votes but do not work for them when they are elected. In the case of the 2020 election, it was paramount that Donald Trump not have the chance at a second term, so black voters overwhelmingly still voted for Biden.

They were heralded as, once again, the “saviors” of American democracy who swooped in to rescue America from itself. And Biden even commented in his victory speech that the, “African American community stood up again for me. They always have my back, and I’ll have yours.”

Here’s how that’s going to work.

Let me preface this by saying that the Black community, especially Black women, are proud to have played a pivotal role in electing the first Black female Vice President Elect of the United States, as well as one of the most capable and steadfast public servants America has ever had. We admire Kamala Harris’ personal achievements, and Joe Biden’s commitment and belief in American institutions. But we are moving into an era (hopefully) where the Black electorate is focused on two things: what do you plan to do for my community and how do you plan to do it.

As much as President Trump was a flawed leader, his administration was committed to putting forth policies that benefitted his base and by and large white people and the rich. Trump’s supporters felt emboldened by having a leader in office who was unapologetic about his loyalty to them. Did it go too far? Yes. Did Trump fail to reach the rest of the country? Yes. But in reality, both political parties have a track record of putting forth policies that disproportionately hurt Black communities in order to preserve white wealth and prosperity.

Black people voted for Trump because they thought they were voting for their interests. The Black lives matter protests that took place over the summer was an outcry for change—not just against the pillaging of Black bodies, but to stave the crater size wealth gap between Black communities and white communities. The Black community is indicating that they no longer want to support candidates whose portfolio largely entail backing initiatives that work at the expense of Black people. Unless the Democratic Party makes a drastic change, they will not get the Black vote so easy in 2024.

For the next four years the Black community will be holding Joe Biden, Kamala Harris and their administration accountable. On day one they need to start working. No one is shy about acknowledging that they are working for the benefit of white citizens, but when Black people make demands of the people they help to elect they are met with: all Americans matter. That kind of politics has led to defunding Black community resources to continually prop up white wealth and people are tired of it.

The Black community want their elected leaders to be declarative about their intentions to push policies and make change on behalf of Black people. Politicians who run in general elections clearly want the Black vote. Well, Black people clearly want you to work for them. There is a lot to accomplish in the next four years; and while Black people have grown accustomed to disappointing political leaders, they are still optimistic for a change.

While we all don’t expect racism and the institutions that sustain it to be dismantled when Donald Trump leaves office, at the very least Black people expect their public servants to prioritize Black issues for once. We could spend hours discussing each issue, but in summary we want our communities to be whole and these are the priorities Black people have to begin that process.

First, Black citizens desperately need the economy working again. Job creation is a priority, as well as a federal minimum wage increase, affordable housing and better access to affordable healthcare. All of these issues need to be tackled in the form of policies. These infrastructures in Black communities are already completely fractured, which is why hundreds of black people die from coronavirus each day, or are being evicted and left on the streets. It is because our communities were already frayed—therefore we are the most vulnerable during a pandemic and recession. There is a reason for this and it can be traced all way to the federal government and their failure to work for Black people.

We expect that the Biden administration will have a completely different approach to tackling the pandemic. The Black community is hoping that Biden’s plan will have outreach efforts to their communities as they are disproportionally affected by the virus.

As Biden is assembling a team tasked with getting the virus under control, we assume that he is looking at all positions in his administration to offer to well qualified, eager people who are ready to go to work. We want some of those people to be a reflection of who voted for Biden. We want a diverse cabinet to include Black leaders who are invested in the community’s future and are ready to put forward legislative policies and initiatives that will effect real change.

A lot of Democratic candidates have made promises about education reform and to tackle the massive student loan debt that young people are burdened by. Young Black voters played in significant role in garnering Biden’s win, and his administration will be held accountable for the numerous promises they have made to reform education.

And last but most certainly not least, we the people want criminal justice reform. In the first year of the administration. Top agenda. Nonnegotiable. Comprehensive. Specific. Thorough. We know its complicated; and we know there’s only so far the reach of the federal government can go. But no more excuses. We need the country’s smartest minds on this and we want legislative change. Now.

Congratulations to Joe Biden and Kamala Harris on their historic win. We are aware of the nearly insurmountable task you have of restoring the country, rebuilding relationships with allies, repairing an economy, and fighting a pandemic that has now reached a somber milestone of 10 million cases. We see the work you have to do, and we acknowledge the challenges ahead. The Black community will offer their support along the way. We are not asking for handouts, we are patiently waiting to reap what we have sown.