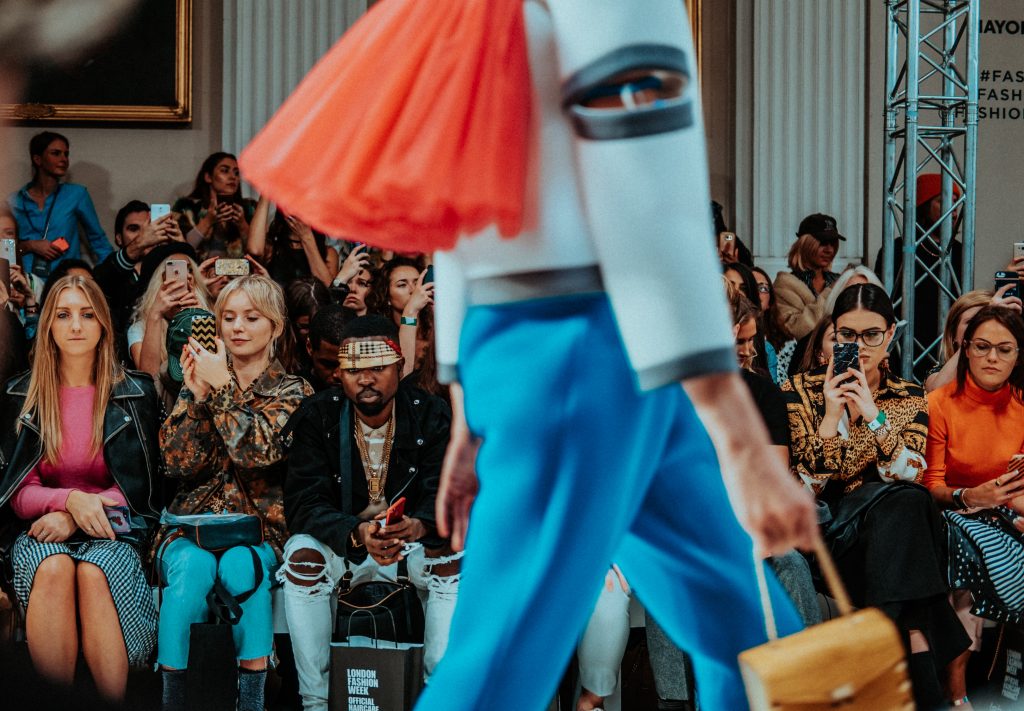 The murder of George Floyd has not only shed light on police brutality, but amplified the root stemming from systemic racism and a long line of racial injustice in this country. Fortunately, the buck doesn’t stop there. Protests have not only invoked footsteps paving on the frontlines, but also are beginning break down the walls in several institutions that do not fairly favor the African American community.  As The Rev. Al Sharpton stated as he eulogized George Floyd’s first funeral,  the systems that have had “their foot on our necks” as Black Americans. The fashion industry is one of those being called out in recent days.

Fashion playing such a major role in the African American culture. From celebrities, to music moguls, influencers to our everyday way of life.  From Timbaland boots, to Coogi, Guess jeans to Gucci, we have popularized and catapulted endless brands. Most recently a new and emerging brand Marine Sere has become all the rage after the likes of Beyonce and Tracee Ellis Ross rocked it. Immediately after, a sleuth of fashion influencers flooded their timelines clothed in the french designer, which of course will trickle down to the masses.

Blacks only make up 14% of the population, but in some cases, make up over 50% of overall spending in key product categories.  So why does this industry perpetuate a long history of not including people of color, more specifically, Black people, within their brands. The perceived notion is that black people are not good enough to be seen visually representing your brand, however, our designs and style have been blatantly appropriated by many of  these same brands over decades.

So who’s getting called out exactly? The list includes, fashion designers and houses, retailers and even fashion influencers being put on blast to answer which side they are on; the side of justice or injustice? In addition, show receipts on how they plan to combat and dismantle racism and discrimination within their own house.

According to Nielson, 42% of Black adults expect brands they purchase from to support social causes; this number lands 16% higher than the total population. So there’s no surprise here that so many are expecting and pleading for the fashion industry to “Pull UP” ( in Rihanna’s words). However some brands have hopped in the passenger seat alongside the black community, while others have no plans of turning on the ignition to racial equality.

Many have been silent, while those who maybe felt inclined or pressured from their black audience, have posted vague and non-implicit statements that leave the black community furious and unsatisfied.

Nike was one of the first to respond with a sensitive, relevant campaign titled “ Don’t Do It”. Balenciaga also quickly responded by donating to the NAACP Legal Defense Fund and plans to donate annually on May 25th;  with promise to update their progress on that commitment. 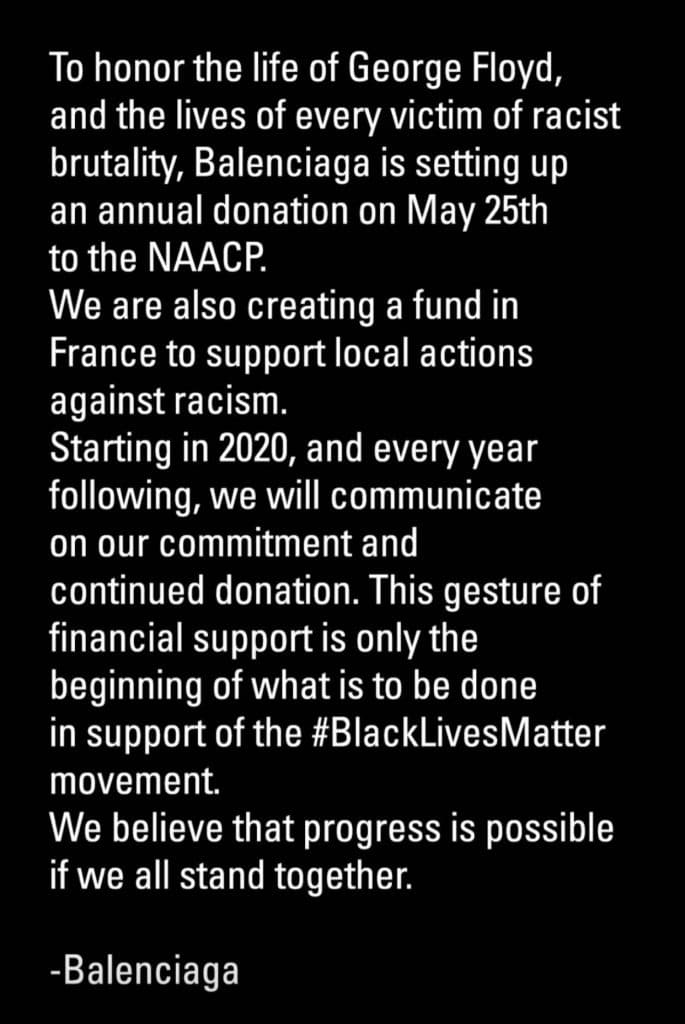 Other brands have taken what many think is too vague of an approach. Celine posted a statement (only 3 days ago) claiming to stand against forms of discrimination and oppression. Celebrity stylist Jason Bolden immediately called them out for refusing to dress black celebs unless they have a white stylist. And a quick stroll down their timeline will show no black or brown faces to back up his claim. Virgil Abloh best known for his brand Off-White, but is also most recently appointed creative mens director for Louis Vuitton. His donation to Fempower of $50 was laughed at and deemed deplorable by many, while the fashion house he represents decided to launch a new bag in lIEU of a statement.

White influencers have either taken one of two stances. Some like Blaire Eadie, have muted their own voice to be silent and listen to see how they can be an ally. She has personally donated to multiple organizations and also created a page on her blog Atlantic- Pacific highlighting black designers and influencers to patronize. While others have been chastised for hopping on the trend of posting a black square and then continuing business as usual; posting daily routines or outfit of the day pics.

So what does change look like? It can’t just be a tone deaf post on social media. It also just cant be shoveling over money to quiet our voices. It’s similar to a parent that showers their child with lavish gifts, but never spends any quality time. Money helps but it’s just a band aid for an issue that delves much deeper. True change will be a process and must go beneath the surface. It requires hard talks, getting uncomfortable and building relationships.

A start could be H&M’s approach. H&M was also one of the first to take action, addressing the issue at hand by using the preferred verbage and not glazing over the real facts of what occurred that tragic day of May 25, 2020. A day that changed the world for every American; not just blacks. Not only did they pledge $500,000 to the NAACP Legal Defense and Education Fund, but backed up with a full extensive and comprehensive plan you can read here.

Another step in the right direction; take a full examination of your entire structure. Black people can not just be represented on the sales floor. After twenty years in retail, I can count the number of mangers and corporate representation I’ve seen on one hand. Review how diverse your leadership team is from the store level up to headquarters. It’s clearly seen that fashion is completely whitewashed, especially in luxury fashion. Numerous studies show, Blacks spend more on luxury items than their White counterparts.

Continue with an honest look at representation in ad campaigns, fair and competitive wages for Black employees and influencers and investigation of discrimation complaints within your company. There are a plethora of other things that can be implemented.

Aurora James, owner of Brothers Vellies, has a different approach, sparking the #15percentpledge. This idea challenges businesses  to purchase 15% of their products from black owned businesses; to match the 15% of the population African-Americans make up. This will allow more visibility, and more buying power for small black business to grow into big ones.

@wholefoods @target @shopmedmen @walmart @saks @sephora @netaporter @barnesandnoble @homedepot I am asking you to commit to buying 15% of your products from Black owned businesses. . So many of your businesses are built on Black spending power. So many of your stores are set up in Black communities. So many of your sponsored posts are seen on Black feeds. This is the least you can do for us. We represent 15% of the population and we need to represent 15% of your shelf space. . Whole Foods if you were to sign on to this pledge, it could immediately drive much needed support to Black farmers. Banks will be forced to take them seriously because they will be walking in with major purchase orders from Whole Foods. Investors for the very first time will start actively seeking them out. Small businesses can turn into bigger ones. Real investment will start happening in Black businesses which will subsequently be paid forward into our Black communities. . Dont get me wrong, I understand the complexities of this request. I am a business Woman. I have sold millions of dollars of product over the years at a business I started with $3500 at a flea market. So I am telling you we can get this figured out. This is an opportunity. It is your opportunity to get in the right side of this. . So for all of the ‘what can we do to help?’ questions out there, this is my personal answer. #15PercentPledge . I will get texts that this is crazy. I will get phone calls that this is too direct, too big of an ask, too this, too that. But I don’t think it’s too anything, in fact I think it’s just a start. You want to be an ally? This is what I’m asking for.

Change doesn’t happen overnight, but progressive steps clearly need to be made within the fashion industry. Martin Luther King Jr. once said…

“There comes a time when one must take a position that is neither safe nor politic nor popular, but he must take it because his conscience tells him it is right.”

We’re done waiting for your conscience to set in.