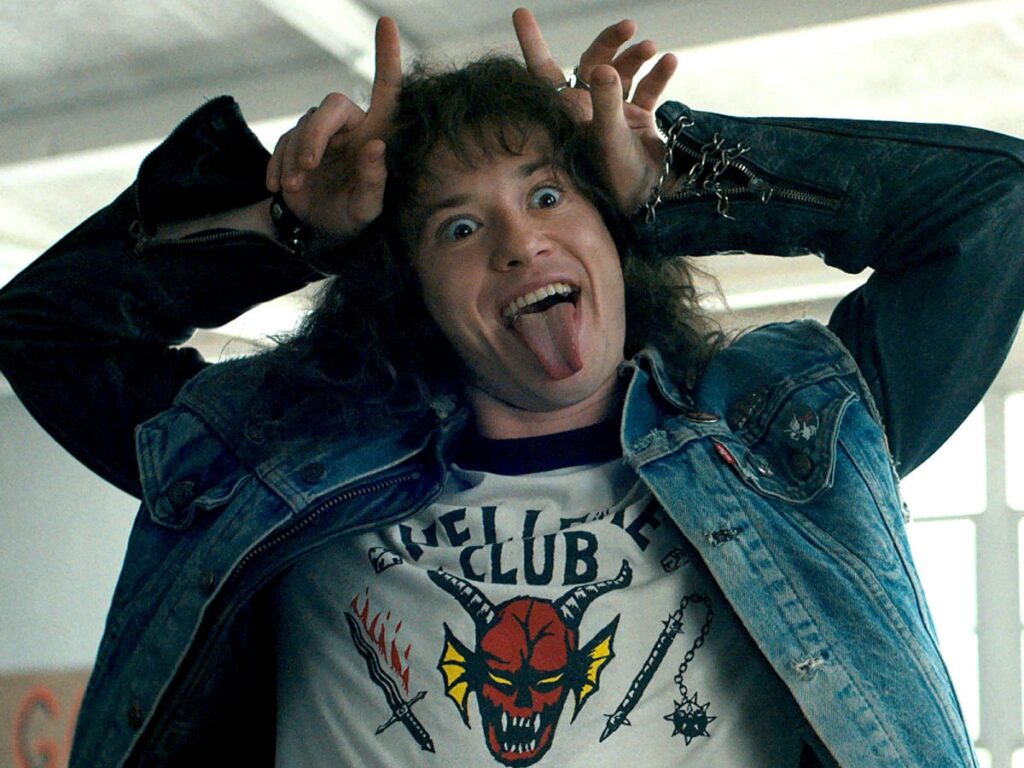 WARNING: There are Stranger Things season 4 spoilers below, so catch up and come back if you’re not about that life.

Now that the housekeeping is out of the way, let’s get into it.

When it comes to TV shows, it can be hard to top the 80s nostalgia of Stranger Things. Here are 4 mind-blowing moments from season 4 which will leave you wondering, WTF.

Stranger Things does not shy away from a good bully plot, so the new character, Angela, is that horrible person. We’re introduced to her character for the first time in the classroom (at Lenora Hills High School) as we witness her embarrassing a powerless “El” during her presentation. In the school courtyard, we see Angela and her boyfriend Jake smash her school project, and then at the skating rink, Angela decides she needs to inflict more humiliation. Angela and her crew start skating fast around El, which confuses her, so she never saw Jake coming to throw the chocolate milkshake at her, making her fall on the hardwood floor!

SN: I was disappointed in Will in this episode; he never defended El and felt terrible from the sidelines. I digress.

I know this is a fictitious show, but when I tell you, Angela played that role because she was making me so mad! If only I could jump through the tv screen, lol.

When El walks up to Angela and hits her in the face with a SKATE, in disbelief, I thought this would be a dream sequence of what El wanted to do, and then we would see her return to reality and walk away. But no, it happened! And though we shouldn’t condone the violence, that girl had it coming. A powerless El can only take so much! She left Angela concussed.

Give me all this origin story! Vecna’s true identity catapulted the Stranger Thing series. Talk about a tragic complex character, or maybe he’s a murderous psychopath with powers. Either way, this man is the twisted blueprint. There’s nothing basic about Vecna’s character. Even as a young boy named Henry, he went from using his powers to torture rabbits to there’s no need for mere mortals, let me murder my family. A perfect example of that escalated quickly. This type of killer is wild to me because Vecna does not have a motive. He just wants to be a powerful predator. He even said it himself!

“I saw a means to realize my potential to transcend my human form, to become the predator I was always born to be.” – Vecna.

YES. Father of the murderous Henry/1/Vecna and the sole survivor of Henry’s attack on the family. Victor is living a life of solitude in the Pennhurst mental hospital bc the cops think he killed his family. Let me not forget to mention he sliced out his eyes, so he wouldn’t see those horrible visions Vecna imposes on him. If I’m being transparent, Victor is on the list because of horror movie icon Robert Englund. I never expected to see him on Stranger Things but I’m happy he came. That alone earns a WTF mention.

Eddie Munson is another new character introduced this season, and I enjoy Eddie’s wit, geekiness, coolness, and boldness. Yeah, he sells drugs, but he’s your friendly neighborhood drug dealer. Eddie is such a likable character. It’s annoying that for a good part of the season, he’s on the run bc the locals believe he killed Chrissy Cunningham (if only they knew it’s Vecna’s curse). After the kids come up with a defeat Vecna plan, Eddie’s character is in the upside-down because this rocker has a significant job. To distract the Demobats with music, and who loves music? Me! So this scene of Eddie standing on top of the trailer hitting us with  “Master of Puppets” by Metallica was electrifying! Especially since I like Metallica’s music. I think the Demobats might like Metallica too because those jokers came hovering in droves! Those critters are nothing to play with, so Eddie’s willingness to risk it all to save Hawkins, a town that doesn’t care about him, is a WTF moment.

Overall, Stranger Things season 4 Is creepy, unnerving, funny, and leaves you wondering who will make it. There are more WTF moments this season, but I settled for four. Hopefully, these mind-blowing moments will help get you excited for season 5.