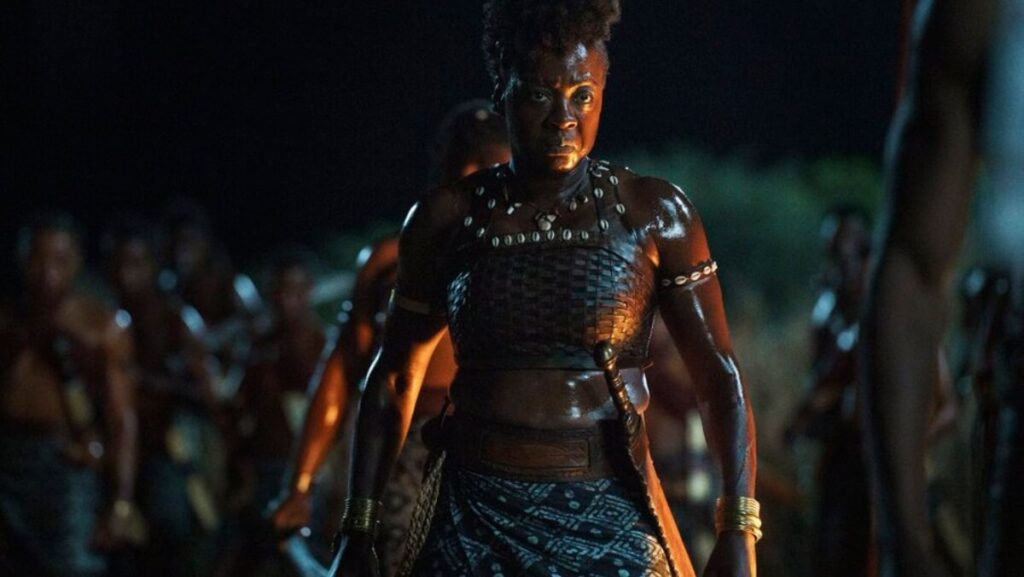 All hail The Agojie!!! The Woman King starring Viola Davis as Nanisca dropped its trailer, and I’m impressed. Any opportunity to tell an untold story in the sea of repetitive storylines is worth it. The Woman King, directed by Gina Prince-Bythewood, which hits theaters on September 16, is based on the true story of the Dahomey Amazons. An army of women warriors who defended the West African kingdom of Dahomey in Benin during the 17th, 18th, and 19th centuries.

Doesn’t that sound cool? African women warriors with battle cries. I love a good battle cry, even though I struggle to do them myself. These jaw-dropping Moments From The Woman King Trailer are just a few that stood out to me.

The title of the movie is intense. Taking a word like “king,” which is usually associated with a man, and pairing it with the term woman is so POWERFUL! It’s saying many things without actually saying them.

Right off the bat in the trailer, we see snapshots of the Agojie women looking chocolatey, powerful, resilient, and ready to play. I’m here for it because it’s preparing us for the dominance the Agojie women will display. I even envisioned myself in the African attire jumping through the air, maybe not as gracefully, though.

We quickly learn that evil is coming, and the evil is a white man. Though that narrative may not be surprising, what is, is a weapon of women warriors led by The Woman King herself, Nanisca. It’s compelling to see these strong women have to go through rigorous training and the struggles that come with it in order to prepare for war. Situations like that make me think these warrior women are still deeply ingrained in black women today! Can we get a hand clap?

That song is circulating in my head because I love seeing black people sit on thrones; in this case, they got John Boyega as King Ghezo. I know that alone will get some butts in the theatre seats especially since he showing a little chest action. Don’t get me wrong, I don’t want to dwindle his importance down to mere eye candy, but from what I can tell, he seems like a compassionate King concerned for his people.

I’m not sure of Viola Davis’s accent. Can she maintain the accent throughout the movie bc I felt some words sound American? Also, who is kissing who in the trailer?! I won’t pass judgment but I need an extended trailer stat!

I’m excited to see how this movie plays out. I’m excited to see what the cast will bring to their characters because some of the clips of these women screaming and yielding a machete are beautifully striking.  Witnessing black people fight oppressors is powerful imagery, especially since it’s not a familiar story. We see ourselves as heroes, warriors, and a community, which is significant. So let’s support this movie so that it can open doors for many more. This movie is for everyone and like Director, Gina Prince-Bythewood said in her Vanity Fair interview

So make sure you get out to those theatres on September 16 and purchase your tickets to The Woman King.