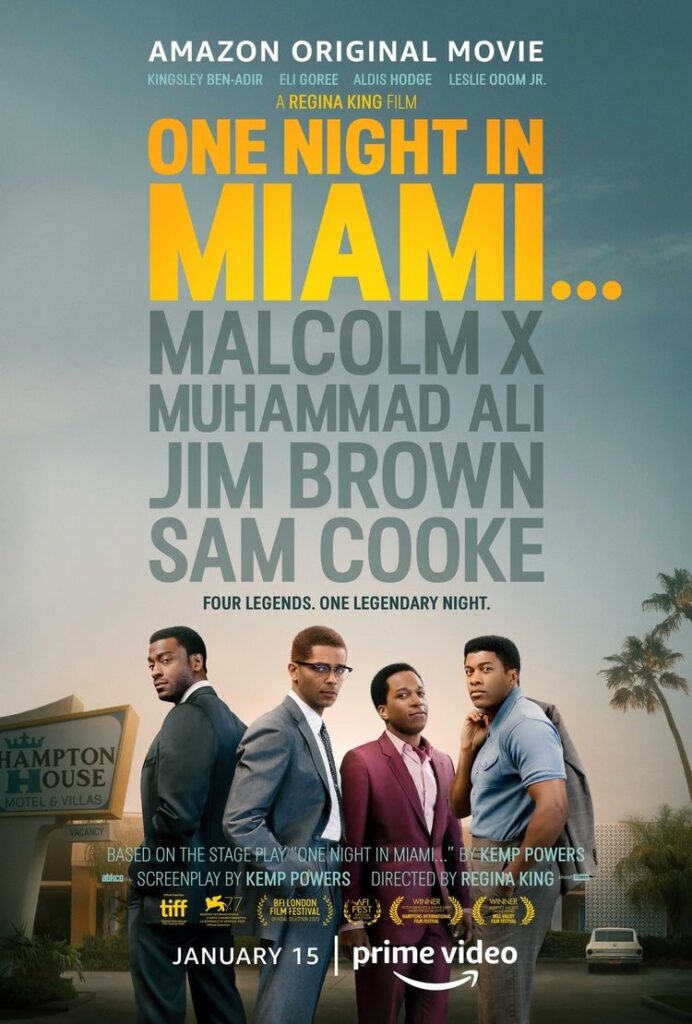 The night was historical. A brash, loud-mouth Cassius Clay beat the heavily favored Sonny Liston, becoming the youngest heavyweight boxing champion. The night was magical. Cassius Clay’s good friends, Jim Brown, Sam Cooke and Malcolm X, were in attendance to witness the phenomenal event. But the night, February 25, 1964, was just getting started.

In her directorial debut, Regina King brings the award-winning stage play, One Night In Miami… to the big screen, opening in theaters and streaming on Amazon Prime beginning January 15, 2021. Written for the stage and screen by Kemp Powers, (Soul and Star Trek Discovery), the story imagines what happens when four iconic Black men on the verge of career transitions, get together to celebrate. The answer is a compelling lesson on how to live on purpose.

Like most adaptations of stage plays to the big screen, One Night In Miami… struggles with adding action around what was meant to take place in one room on one night. Regina King and Kemp Powers manage it better than most, but at times it feels contrived. But, all action scenes aside, the meat of the story unfolds the weight on each man’s shoulders as they navigate their fame and fortune against the backdrop of the Civil Rights Movement.

One Night In Miami… is thought-provoking and compelling. These four men were more than icons, they were pioneers, using their platforms to create social change for those of us without a voice. It’s worth more than watching. It’s worth contemplation and a global conversation.