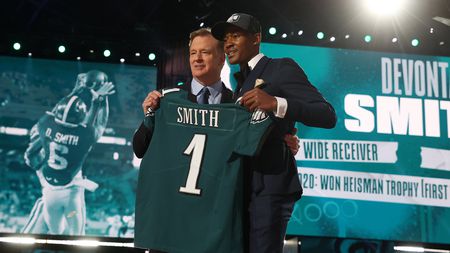 The Eagles picked up highly sort-after wide receiver DeVonta Smith, who earned Heisman Trophy winner in 2020. Also coming to the Eagles will be Fletcher Cox(no.91)‘s cousin Kenneth Gainwell, picked up in the 5th round and playing the position of running back.

On the topic of Philly, Saint John Neumann and Maria Goretti High school alum and Philly native Christian Barmore, of Alabama University, is heading to the New England Patriots as new defensive tackle.

Barmore, picked 38th overall in the 2nd round, IG bio reads, “BMoreBGreat” and it’s hopeful he will be, as well as Philadelphia Eagles’ newest recruits.

Eagles acquiring Smith could be a, “win-win”, according to NBC Sports. NBC’s analyst and highlights of Smith continued by saying, “The Birds got a potential superstar in Smith at a position of need”.

And with Gainwell joining his cousin in the city of Brotherly Love, fans and draft analysts see this draft as a victory.

Although the Eagles and the overall drafts saw a smaller number of quarterback selections, QB Trevor Lawrence of Clemson will be heading further south. Lawrence who won CFP player of the year (in 2018) will be joining the Jacksonville Jaguars. Lawrence was the number 1 pick in the 1st round overall of the NFL Drafts.

Fan favorites like Russell Wilson’s Seattle Seahawks and Tom Brady’s Tampa Bay Buccaneers however acquired less favorable picks. With the Seahawks picking up only 3 in the entire Drafts and The Bucs even picking up the very last, 259th pick, in Houston University’s linebacker Grant Stuard.

And according to NFL fans and sport watchers, and with Covid still at the center of of the country‘s main problem, it’s being said the draft saw a lack of talent to pick from, as a result of last year’s season being reduced due to Covid-19 and that decision coming from NCAA college football.

The normal pool of talent just wasn’t there.

With some veterans opting out next year, see Aaron Rogers, amongst others, Patriots, Cardinals and Broncos scored big this Draft and the loved Rams and Ravens struggled, according to CBS Sports.

Luckily, the Philadelphia Eagles secured a top 10 player. And with a year like the Eagles just had, their newest picks seem hopeful.