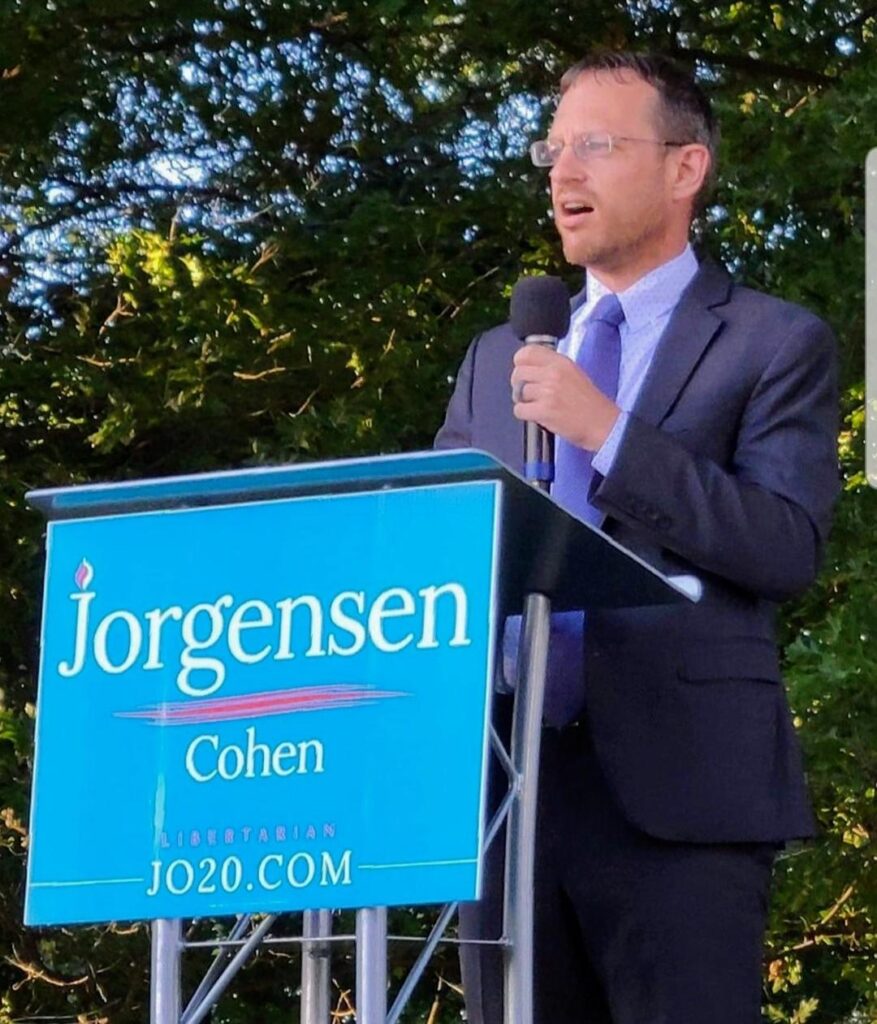 I drove from Apex to Durham, a 45-minute drive, to see Libertarian Vice Presidential Candidate Spike Cohen’s election rally. I didn’t know what to expect, all I knew was I had to go there for multiple of reasons:

This year has been the most trying year of my life and I’m tired. After witnessing the debacle (the first presidential debate), something inside of me said, “We cannot do this again.”

I began to search for answers, scrolling through my Facebook newsfeed, attempting to find the sanest people I knew to make sense of the current state of politics. A retired teacher on my friend’s list had posted an upcoming event happening in Durham, NC:  Meet Spike Cohen VP 2020.

Sure I have heard of the Libertarian party, but I didn’t consider them a viable option. For a moment, I wrestled with myself. A vote for the Libertarian Party means a vote for Trump I have been told. But I’m tired. I’m tired like the rest of America is. We are tired of voting for the ‘lesser of two evils’ and it’s getting old.

I hopped out of my car armed with a notebook and cell phone ready to gather all the information I needed. Never have I been to a political rally before. Hundreds of people in gold and white t-shirts gathered in front of Mystics.

They mingled in unison over their quest for freedom and their disappointment with the corrupt two-party system. I stood behind a wooden barrel watching the crowd of people. There I met Regan, a bright 19-year-old college sophomore, her brother Wilson, and their father Chris. They were the first real-life Libertarians I have ever met. “Libertarians are giving the power back to the people,” Regan’s father stated, cutting into my political confusion.

They began to show me the Libertarian way. They are a family who believe in the rights of every individual. When asked about wasted votes on Libertarian candidates, Wilson smiled anticipating my question. “You are wasting your vote voting for someone you don’t want to vote for.” I instantly agreed.

After I said my goodbyes to Regan and her family, I met a young married couple, Jennifer and her husband Zach from Fayetteville, NC.

In their first election Zach voted Libertarian and Jennifer voted Democratic. Zach told me he felt things had “gotten worse” and his disappointment in both parties grew over the years. “The Democrats run on this hope and change and progress and the Republicans run on freedom and libertarianism [they both deliver] the police state together.”

Jennifer, undecided about her vote, told me she was there to support her husband. In addition, she had her personal reasons as well. Her internal conflict was she saw things differently than most.

Static from a microphone erupted from the speakers. I turned my head to the left and saw Spike Cohen. He moved to the middle of the crowd; the crowd cheered buzzing with excitement, my heart raced.

He stood there aware and engaged. People from the crowd spoke to him, asking him questions about issues they were facing, and he listened with sincerity and answered with conviction.

I made my way to the middle of the crowd. The retired teacher from Facebook grabbed my arm in excitement and thrust me in his direction. He spoke to me as if I was the only person in the room. This is what a candidate should be like, I thought.

“A wasted vote is [voting for the people] who created this mess.”- Spike Cohen

That was the first thing Spike Cohen said to me. And that was the final thing said to me when I left the rally. Spike’s speech spoke to the hearts of Americans who have grown tired of circus politics, oppressive systems, and “intrusive government”.

In essence, big government (federal government regulations), programs, and policies have caused crippling effects on health care, limited affordable housing, and infringes on the rights of the people.

“The problem we see today is that we have a broken system and [neither side can reform a system that robs “takes away from” it’s people],” Spike argues. “The Republicrats spew ‘empty rhetoric’ equating to disastrous policies [which result] in negative outcomes.”

In his speech, Spike vowed to end bureaucracy and crony capitalism. “We aren’t just running to tell Americans voters they have another political party they can vote for,” he said as the crowd rallied behind him. “We are running to end the Fed…to end the War on Drugs, end police brutality…and to put the power back in your hands where it always belongs.”

He made his case against Joe Biden the “architect of military policing” and Trump the king of crony capitalism. Ultimately, Cohen believes that voting for either one of these candidates is a  “waste of vote” for the future.

The last people I spoke to were friends Ashlee and Cassie. Ashlee sported a colorful Libertarian shirt and her friend Cassie wore gold and black, the colors of the party.

I spoke to them briefly, but they made a lasting impression. Cassie, 35, said, “I feel that they ‘Republicans and Democrats’ have caused all the problems I have seen throughout my whole life. I relate to them ‘Libertarians’ more than I relate to a Democrat or Republican. They are the ones that have been in control of everything.”

Her friend Ashlee nodded in agreement and had just got back her right to vote.  At 36, it will be her first time voting in an election and she is voting for the party that will give her a voice.