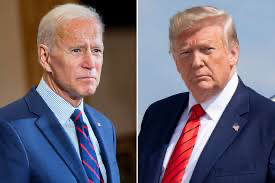 America faces an epic choice in the coming months, and the results will define the country for a generation. These are perilous times and the country is at a crossroads. Science is in a battle with conjecture to determine policy in the middle of a pandemic. At the same time, the US is reckoning with centuries of racial injustice as the White House stokes division along racial lines. The highly anticipated debate between current President Donald Trump and Democratic nominated candidate former VP Joe Biden was sore on many eyes.I bet a lot of you rolled your eyes at some point and some of you were angry at other points.

The opening discussion of the Supreme Court ultimately came down to an interesting question of when Chris asked Biden would you be in favor of adding to the court and removing the filibuster? Joe Biden surprisingly refused to even answer. That was a very important to the discussion and even Trump brought it up as how important to the statement that was. Biden is basically saying he doesn’t support filling the seat right now with Amy Coney Barrett and Trump stated that he does.The biggest question going forward is would Joe Biden as President a Democratic effort to add Supreme Court Justices. This is something not many Americans publicly like and even criticize and he didn’t take a stand. He was the former Senate judiciary Committee chair and this is something he is quite familiar with and he never answered. That was something very odd.

Coronavirus was Biden’s time to flex his muscle.Biden gave statistics and described to us what President Trump didn’t do. The key thing is Biden never gave us a plan. Biden has been a huge proponent of playing to the crowd but not showcasing policy as of late. This may do to his elder age but this strategy didn’t work at all and it created less productivity. Ultimately if Biden wants to win this election this is his main argument. A lot of people are in bad shape due to this virus and he has to convince the American people that he can fix this.

On the other side Trump attacked Biden’s criticism of the 200,000+ killed from this virus in the last 6-8 months. The sad thing is he only did it by stating his dismay for the media, blaming the democrats and how Biden would’ve done worse, instead of taking the responsibility. How any of that in any way helps the American people understand who to trust? I don’t know but that’s not it Mr. President. We don’t want to hear our President display victimhood on national television.

Trump and Biden were asked about the promise to repeal and replace the Affordable care act which discusses the healthcare topic. Trump pushed back on moderator Chris Wallace’s assertion that he has not come up with a comprehensive plan to replace the health care plan that his predecessor, President Barack Obama, enacted in 2010. He cited his efforts to cut prices of drugs such as insulin, but did not go into specifics of a plan of his own. Congress voted to repeal the ACA’s financial penalty on the individual mandate in 2017, and a Republican-led effort to overturn Obamacare is now headed to the Supreme Court. Trump said his administration has protected people with pre-existing conditions, but most alternative plans supported by Trump would provide less coverage to people with pre-existing medical conditions.

Fox News moderator Chris Wallace voiced the fear of the African American community by posing the question as gently as one can “President Trump’s response to the violence in Charlottesville three years ago when he talked about very fine people on both sides was what directly led you  to launch this run for President,” he said, effectively asking if Biden. While asking Trump “President Trump you said you believe you have done more for Black Americans than any President with the possible exception of Abraham Lincoln.” Asking them both why voters should take one person’s trust over the other to deal with race issues facing this country over the next four years.

This question opened up a can of worms that neither candidate could respond too. All we heard were candidates fighting over which one was the “white savior” of the African American race which was very dreadful. Speaking as an African American I was annoyed seeing us used as a prop for a presidential debate. All we want is to be treated equally not differently. Especially with the climate of Blacks having trouble with injustice in this country we deserve better from what we heard tonight.

On another point when Biden was asked by the moderator that since you said you are the Democratic Party. Why haven’t you contacted all the cities that are Democratic run to end the violence going on in those cities due to protests and such. Biden responded “He doesn’t hold public office now, I am a former Vice President”. My question to Biden is why aren’t you no matter who you are trying to make America better instead of staying on the sideline allowing these things to happen. This was just another interesting point I thought that would’ve been beneficial to this debate.

Biden then got into the debate of the state of the economy. Knowing people are struggling due to the pandemic this was a very strong topic that holds value. It started off with Joe Biden speaking on raising taxes on individuals making more than $400,000 a year as well as businesses. He spoke about getting us out of this debt and growth which hasn’t really been done as of late by any president I might add. So his points sounded a little reminiscent of other past democratic candidates. Trump aggressively attacked him stating “why didn’t you do that under Obama” during his term in which I thought was a fair point. Trump’s free market approach was getting shattered by Obama’s economic approach by the moderator. Then came the cutting eachother off to where you couldn’t hear much from either side. The value of what they were talking about came to a halt.

I can say unbiased and objectively that both candidates became a disappointment tonight. The biggest takeaways I got from watching this debate is that this was a mess. We can compare this to a football game where there is a bunch of flags and the referee has to keep stopping the game. Moderator Chris Wallace kept having to interject himself and lecture these two canidates way too much. I think that Trump is still the main story here and no he it doesn’t mean he won. He just knows how to work a stage. Honestly I don’t know if that’s a good thing or a bad thing. I also think that Joe Biden actually sounded competent and didn’t fall apart. The keyphrase to take from this election is “Do better” because this doesn’t give the nation hope we can enter into a brighter future. So right now we have along way until November so stay tuned !!