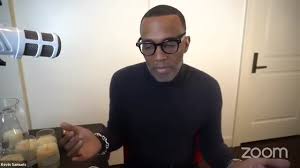 I know by now everyone has seen the viral video of Kevin Samuels, relationship coach, giving crass advice to a young woman. It has been shared many times on Social Media and got hot on Worldstar. Kevin brutally mistreated the young woman who called in on his show seeking relationship advice. He attacked her looks, her business, and her dating choices. Sigh. I bided my time…deciding whether or not to address this video and to address Kevin Samuels’s platform and his work, but today is the day that someone needs to address this man. There is something that needs to be said about a business owner or an entrepreneur who stands on the backs of people, who are naive and socially conditioned to take abuse and mistreatment disguised as ‘help’ and ‘advice’.

There is also something insidious about someone who does this for-profit and exposure. Many people claim that Kevin Samuels tells the truth, but honey even the devil knows scripture. I have known about Kevin Samuels for a long time and his misogynistic overtones and comments spewing from his tattered hairline are dated and defective.

Kevin Samuel’s opinions are not facts

His expertise in the relationship field and his growing platform were easy to accomplish. We need to thank Steve Harvey and Derrick Jaxin for teaching ‘the brothas’ on how to get rich and stay rich by playing off many black women’s insecurities in the dating world. Thank you, Steve!!! In Kevin’s manner, he is also playing off the insecurities of black men as well. Well played, Kevin. Well played.

These ‘gurus’ like Samuels and the others tell black women that their standards in dating are too high. But…….research tells us differently. Still to this day, black women are known for being the primary breadwinners of their households (70 percent) even while married and with children. Kevin, are those black women who are breadwinners in their household are they too average looking at best? Should they not want a man who earns equal to them or higher?

Contrary to popular belief, black women are also known for dating down more than any race of women and being the most loyal to their black male counterparts in the love department. Dating down for black women is not good for them nor it is good for the community. But like Kevin says “nobody wants a single baby mama” and a woman who is past her prime, 28 years old. Isn’t that why a lot of men were and still mad at Ciara? We should choose better but also we shouldn’t aim too high because you know….the goalpost keeps moving.

Here is something else to tell Kevin, educated high earning black women are more likely to be partnered with non-educated low earning black men Yet, the myth that black women don’t give the ‘average’ brother a chance still permeates in these men’s books, in song lyrics, Tyler Perry homemade movies, and in fixin’ my ‘50/50’ man a dinner plate.

Don’t you know? Black women’s standards are too high

The good news is all the books and videos that these men have written have healed black women and set them free!!! Hallelujah…right? But yet black women, we, are still running to these men asking for dating advice? These men aren’t therapists…they are men who saw an opportunity to get money off of black women’s fears of being alone.  Why does this work?

Nevermind that showing black women how to get a man is the easiest come up for any content creator, male or female. Why does it continue to work and guarantee these types of men success? I can’t hate on Kevin if people agree with him and are not willing to separate facts from fiction. I can say maybe some of the stuff that Kevin says could be right, but what I can say is his disrespect and disregard for both his male and female clients is worse than when white companies are racially insensitive with their marketing campaign.

Although I have my thoughts for the Steves and Derricks of the world, you will not catch them disrespecting or degrading their target audience like Kevin. Kevin Samuels is bold and what he has more than anything is the audacity to talk to anybody like they are nothing that seeks his help and council. He is running off a God- Complex because he has struck the black woman’s pain point gold. Many of his supporters believe he keeps it real, but why does keeping it real really mean abusive? And why did so many people share that video that keeps stereotypes about both black men and black women alive and kicking?

I’ll leave you all to think about that.