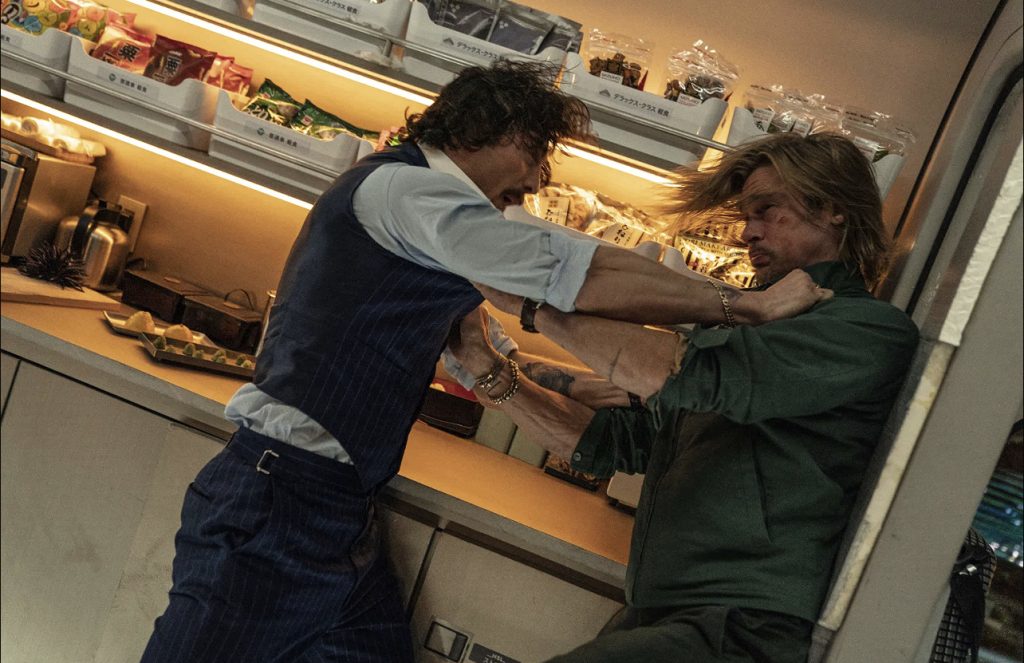 If you’re looking for the ride of your life, this is the film to see. This film is action-packed yet comical with a hint of sentimental messages. Here is my review of Bullet Train. SPOILER ALERT! 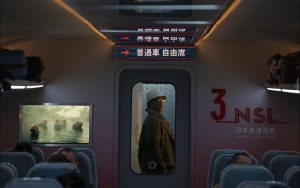 First, we must get into the trailer. Like many movies, they produce a star-studded trailer with most of their action-packed scenes to lure the viewer into the movie theater. You’re excited and anticipating the film only to find out the trailer is the best part. This is why I do not watch a movie with anticipation. It is a traumatic letdown after sitting two hours in a film, wasting precious time. Will I do that ever again? Nope!

What I loved about Bullet Train is that the trailer was just a glimpse of the craziness within the film. It starts with a witty interaction between the two stars, Brad Pitt, who plays Ladybug, and Brian Tyree Henry as Lemon.

Lady Bug attempts to entice Lemon, but Lemon reminds him that they are in the “quiet car” of the train, then proceeds to battle it out in physical combat. There is a jump cut to LadyBug and his handler conversing about his need to be heavily equipt for his “snatch and grab.” Ladybug refuses.

However, this is not your typical “snatch and grab.” What starts as a simple mission becomes a whirlwind of knife throwing, guns blazing, and a bloody train ride. Lemon and his brother tangerine (played by Aaron Taylor Johnson) set out on a mission that includes keeping their handlers son and his briefcase safe. However, LadyBug now has the case, and everyone on this train wants that briefcase. It leaves you wondering why this case is so important. We’ll get to that, but we have other things to discuss. 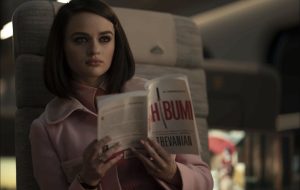 In some films, the storyline can have a great beginning but struggle towards a film’s climactic point and end. Writers Zak Olkewicz and Kôtarô Isaka did a great job connecting the storyline creating a full circle plot with a structured beginning, middle, and end. Bullet Train begins with Kimura and ends with Kimura. Throughout the film, Kimura’s story unravels when his job to kill someone turns into a hostage situation.

However, he is held hostage, and his father is concerned after finding out Kimura is no longer by his grandson’s bedside. Now, I know you’re thinking, what does this have to do with the film? Isn’t it about Brad Pitt’s character Ladybug? Oh, it is, but every storyline leads to this climatic point where everyone falls perfectly in line with one another. There is a total of 10 characters with 10 stories, and it somehow magically falls in line and creates a storyline that is almost impossible to keep up with. Just as soon as you think you know the outcome, you don’t! 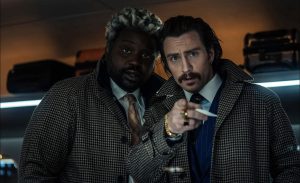 Bullet Train is filled with plot twists! As soon as you think the story is about Bunny, you find out it’s about Kimura, and then you’ll realize that The Hornet is in the middle of all the chaos on the train. Now, who is the Hornet, you might ask. The Hornet is this badass who uses poison as her choice of weapon. While watching this film, you start to question who is behind all the deaths on the train; well, Hornet may be one of them. Hornet, played by Zazie Beetz, is somehow connected to The Wolf’s storyline, played by Bad Bunny. Now, I can’t get into how I can only tell you that their relationship with one another isn’t the best.

Bullet Train did a fantastic job with this because it took you on a roller coaster of emotions that led to the overall climax. The destination is Kyoto, and the build-up is the rocky passage. For Lemon and Tangerine, they have lost the two most important things along their way, his son and the case. Prince, played by Joey King, is attempting to seek revenge in Kyoto. Along the way, Ladybug steals the briefcase, the Hornets steal it from him, and Kimura’s father, The Elder, enters the train. Up until the end, you are led to believe that there is someone on this train that has it out for everyone.

On the contrary, our answer is waiting in Kyoto. You now have a connection with these characters, and you know their story, vulnerabilities, and what led them to this moment. At one moment, you even sympathize with The White Death, but not for long. The ending connects all the dots and has a satisfying conclusion. Would I watch this film again? Oh, for sure!

You will enjoy this film if you are a fan of Director David Leitch. Leitch is known for Deadpool 2, Fast and Furious Presents: Hobbs and Shaw, and John Wick. Lastly, there are several guest appearances that I believe make Bullet Train even more special. One from Ryan Reynolds, who makes a brief cameo appearance. The irony is that Brad Pitt made a cameo appearance in Deadpool. Could this be their little inside joke? I think it’s cinematically pleasing for a movie fan like myself.

I can only hope I’ve convinced you to see Bullet train. If so, I’d love to read your take on it.