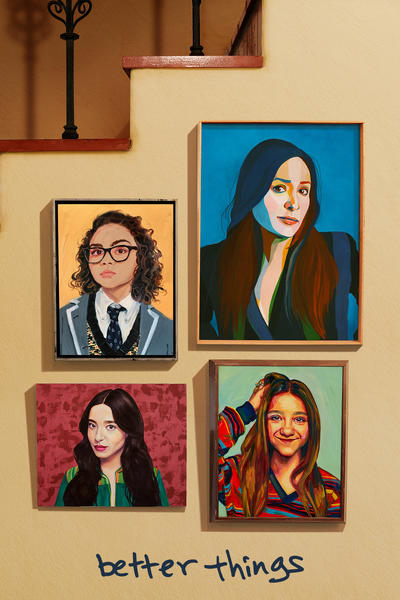 As the Stay at Home order continues to be in effect for the majority of us, I know I am not alone when I say, “What else is there to watch?”.  We’ve done watch everything from cat memes, to slap fest to Tiger King. We have used up every free 7 day trail we could get our hands on, only to forget to cancel the subscription before the charges start and now we are paying for it, literally. But it is a small price for endless entertainment during a time that entertainment feels pretty essential. Check out our entire Must watch list for more must see shows and movies. 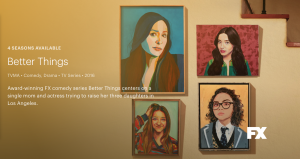 You can never go wrong with mixing comedy and drama. Better things, starring actress Pamela Adlon (that every movie geek may recognize from the John Cusack 80’s classic, Say Anything), who also played in Bumblebee in 2018.  Pamela plays Sam Fox, a single mother of 3 juggling the pressures of continuing to pursue her acting career in Hollywood. While continuing to earn a living, follow her dreams, and raise her daughters, Sam does it with humor, honesty and love. Once Upon a Time in Hollywood actress Mikey Madison also plays in Better Things as Max Fox, daughter to divorced mother Sam Fox.

Better Things has been a hit with both fans and critics according to Rotten Tomatoes, with a stellar score of 95% from critics and 84% from audiences.

Pamela Adlon’s Better Things abstains from traditional sitcom sendups and forges a path all its own – in this bawdy, often hilarious and bittersweet ode to the daily highs and lows of being a single mother.  Translation it has all the heart and charm of the Gilmore Girls, with a 2020 spin on it.

There may not be a better show on HULU then Better Things, so go check it out and Be sure to let us know if you enjoyed them as much as we did.

Sapphire White is a world-traveled, communications professional from Maryland. This ambitiously driven lover of fashion with a reputation for helping and empowering youth, has earned her Master’s degree from Loyola University Maryland in emerging media and her Bachelors of Arts in Media from Pennsylvania State University. Sapphire commands a room and lights up any space she occupies. Whether she’s having tea on a balcony facing Big Ben and the London Eye, or taking a beat on a swing in Bali. This talented editor with vast knowledge in all things lifestyle, encapsulates the voice of a generation. Sapphire attributes this to her strong faith in God which guides her through life, trials and tribulations. Sapphire is a fashion aficionado who preferred place to shop in Paris. Her favorite designers include the world-renown and newer artists like Brent Faiyaz. In her downtime, she curls up on the couch with a good book or her laptop, searching for the most creative recipes. Sapphire notes her mother as her hero whom she’s learn life impacting lessons from she hopes to pass on to others. Her mission is to empower youth to be brave readers. Sapphire joined InClub Magazine in March 2020 as Editing Manager. Prior to her position at InClub Magazine, she led effective communications teams in major corporations.