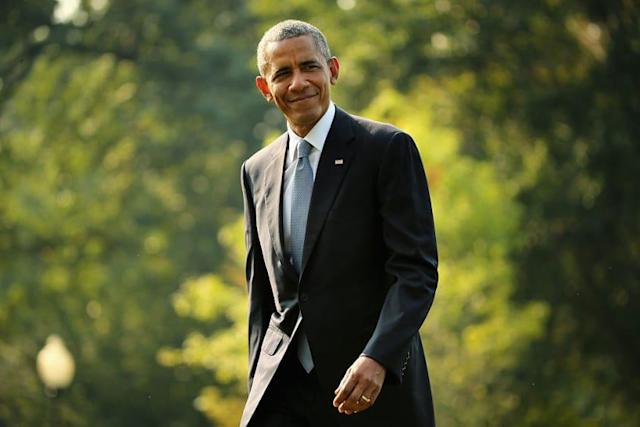 Barack Obama a la America’s first Black President and one of the cultures, if not The Culture’s biggest flex, celebrated something even bigger last week.

Not your average birthday party

Barack Obama and friends hit up his residence over at Martha’s Vineyard for his 60th birthday bash, per photos leaked by The New York Post and according to The Hill.

And it was everything most would imagine, from none other than Barack Obama—and that’s as literal as it gets- of the Black Boy Joy and cool-dad swag aficionado club.

A lot of the extravaganza surrounding his milestone event also had something to do with the location. Obama picked the back drop of his 30-acre property at Martha’s Vineyard to celebrate, according to USA Today.

Unwarrented photos took over the night

Beloved stars 1,2’d the entire night, including Mr. President, and snapped a lot of photos for the loved 44, who was caught outside the bash sans mask, according to The Hill report.

Obama was caught without a mask in one picture, in one paparazzi filled photo, captured by the NY Post and the critics immediately descended, trying to rain on the good 44’s 60th birthday parade party.

But the hate train didn’t stop any partying.

As some, without the A-list high-profile status got a chance and a glance, of the affair, when photos from the event started getting circulated by actual A-list attendees on their socials.

It didn’t take long for the photography ban, implemented at the party, to kick in and guests who had been snapping pictures, learned it would be removed, according to USA Today and The Hill.

Before they had to be removed, over here on Beyoncé’s internet, Erykah Badu captured Barack Obama, with a mic in hand, dancing and enjoying himself and the milestone event.

Erykah Badu and some others who had been posting pictures from the event threw their hair, and maybe masks back, too. As and turned up for America’s former, and probably the most beloved, and Progressive face to grace the line-up of U.S. President’s to date.

Most of the coverage surrounding his 60th bash included worry and concern in the time of Covid-19. And if it would still live up to the hype most have come to know and love Obama for.

Despite the concerns, attendees such as Trap Beckham. TJ Chapman and H.E.R, partied til late, and probably boogied, too, with the coolest and most swagged out President America ever knew.