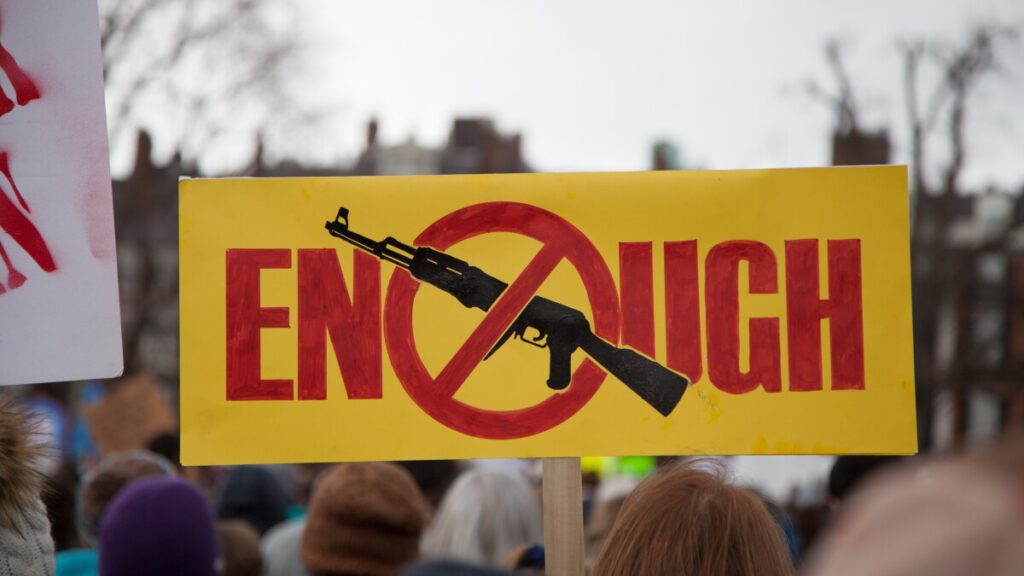 A frantic Philadelphia woman cries for help before a live news team. This comes after a frightening Saturday evening in her neighborhood. One that would see 3 people dead and 11 injured on a popular city strip. This is America. This is slowly becoming the norm, and if certain pockets of the political sphere have their way… it will be. America needs to take a step back and look at the picture. A portrait of itself that has been painted in blood and in construction since April 20, 1999. Columbine marked the beginning, and there was a time when leaders believed that it would never happen again. Then Virginia Tech, then Sandy Hook, and so on. Then they would cry “never again.” They lied again. We have we subscribed to the idea that “guns don’t kill people, people do.”

They do actually, and the past 30 days have been tumultuous on this front. The second amendment grants individuals the right to bear arms. Essentially, it protects your right to protect yourself, and yes, you should have that right. There are countries in this world that encourage their citizens to own firearms. Many of these places, like Switzerland, have very low rates of homicide, and are borderline invisible in terms of mass shooting statistics. There are even countries that outright band handguns, even with police not carrying them. (United Kingdom) These places still do not have the issue of mass shootings like America. Obviously, whether you have a weapon or not isn’t really the issue.

The fact that mass shootings happen the way they do in America is astounding. And at the end we have to hear a story about how “they had a mental illness.” Politicians fear that restriction means removal, so they often sweep efforts to do anything under the rug. This seemingly, and inadvertently, feels as if they care more about their rights than the greater good. It’s fascinating how this issue has gone unattended, until now, while screams from citizens have filled the streets and social media alike.

Mass Shootings Aren’t The Only Issue Though …

The gun violence that is plaguing America’s poorer neighborhoods is an issue here as well. The things that don’t make national news are the millions of minorities stuck in dangerous neighborhoods with very little resources, and even less remedies. The data shows that nation – wide, the homicide rate is up. In places like Philadelphia, Pa. there’s epidemic of teenagers losing their lives. The ability to access guns in America by just about anyone is the underlying issue. I don’t feel amending the amendment is necessary here, but I do believe that further restrictions are.

The real issue here is regarding the people. America has seen a spike in teenage suicide, depression and all forms of anxiety over the last few years. People have taken to social media as a last cry for help in some instances, and often use these avenues as a way to vent. Those in charge have largely ignored these cries. Only recently have interventions been implemented to help struggling teens. And that has been lackluster, for the most part.

The bottom line here is that America does in fact have a gun issue, and it coincides with a mental health issue. The two of these have been working collaboratively to create this epidemic.