Travis Scott is highly emotional after his Astroworld Music Festival turned into a deadly scene Friday night in Houston, Texas.

“He’s really upset — he had no idea what was going on, he was on stage performing,” the source added. “He’s beside himself, I’ve never heard him like that. He was in tears.”

The Houston mayor said authorities are looking at video footage and talking to witnesses, concert organizers and people who were hospitalized.

Kylie Jenner issued a statement early Sunday expressing condolences for the victims of the Astroworld festival tragedy while also supporting her partner, Travis Scott, who has took some backlash for not stopping the show sooner.

“Travis and I are broken and devastated,” Kylie, 24, said in a statement posted on her Instagram Story on Saturday night, Nov. 6. “My thoughts and prayers are with all who lost their lives, were injured or affected in anyway by yesterday’s events. 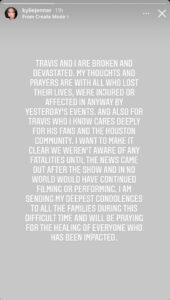 Saturday, Travis broke his silence about the tragedy, tweeting that he was “absolutely devastated” by it. He repeated pretty much the same statement in a video posted on his Instagram Story, and added that he’s working to help the families.

Roddy Ricch, one of the artists who performed at the festival, broke his silence as well on his Instagram Story early Sunday, and mentioned that he would be donating his “net compensation to the families of this incident.”

Five of the victims have been identified: Brianna Rodriguez, a 16-year-old Houston high school junior; John Hilgert, a ninth grade student who went to a high school in the San Antonio area; Franco Patino, a 21-year-old senior mechanical engineering student at the University of Dayton in Ohio; Rudy Peña, a 23-year-old medical assistant and criminal justice student at Laredo College in Texas, and 14-year-old John Hilgert a ninth grade student and baseball star.

A lawsuit has since been filed against Travis Scott and Drake.