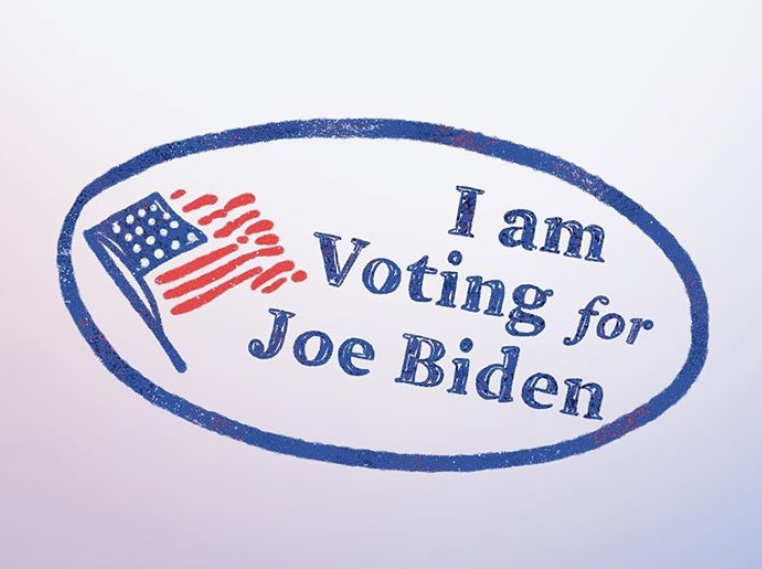 The first presidential debate two weeks ago left quite an impression on many citizens, celebrities and public figures. And although the second debate is cancelled some people have decided to use their platforms to endorse Joe Biden and encourage everyone who can to vote on November 3rd.

Here are 10 people who have endorsed the Biden campaign since his debate with Donald Trump last month.

My heart goes out to everyone touched by this virus, from those at the White House, especially the Secret Service and residence staff whose service ought never be taken for granted, to all those names and stories most of us will unfortunately never know. https://t.co/dtEUrcjPAy

SNL cast member and actress Maya Rudolph recently appeared on “The Tonight Show with Jimmy Fallon” to discuss her role as Kamala Harris on SNL and its significance for the Biden campaign.

The teenage climate change activist took to Twitter to express her support for Joe Biden’s campaign having not previously endorsed any presidential candidates.

I never engage in party politics. But the upcoming US elections is above and beyond all that.
From a climate perspective it’s very far from enough and many of you of course supported other candidates. But, I mean…you know…damn!
Just get organized and get everyone to vote #Biden https://t.co/gFttFBZK5O

V Magazine published their Thought Leaders issue which included Jennifer Lawrence who was very clear about what voting means and why she’s voting for Biden.

V127: THE THOUGHT LEADERS ISSUE Cover 7 of 12: #JenniferLawrence (Actress) “Voting is the foundation of our democracy and our freedom. And I would consider this upcoming election the most consequential of our lifetime. I’m voting for Joe Biden and Kamala Harris this year because Donald Trump has and will continue to put himself before the safety and well-being of America. He does not represent my values as an American, and most importantly as a human being.” Head to the link in bio for the full feature & pre-order V127 now to get the issue before election day! — Photography by @inezandvinoodh Interview by @owenmyers Fashion by @aryehlappin Makeup by @hungvanngo using @diormakeup Hair by @benskervin Casting by @itboygregk — Be sure to register to vote on our V IS FOR VOTE hub on vmagazine.com, created in collaboration with @plus1vote!

“I will proudly vote for Joe Biden and Kamala Harris in this year’s presidential election. Under their leadership, I believe America has a chance to start the healing process it so desperately needs,” the singer expressed in the interview.

George Floyd’s sister Bridgett Floyd appeared in Biden’s new campaign ad commending him for spending time with her family as they were grieving George’s death over the summer.

Cindy McCain wife of the late John McCain casted her ballot early for the Biden campaign and hopes others will do the same.

My vote is cast. I’ve stepped across the aisle and am hoping you will join me. Our country deserves better. And @joebiden is the man that can bring civility back to our country.

Basketball player Chris Paul starred in the first episode of “On the Ground” in which he spoke with Biden in his home state of North Carolina about the upcoming election and the political climate of the country.

Hailey Bieber gave Biden her endorsement for presidental by wearing a tie-dye tee shirt from his campaign website.

One of the things @HaileyBieber and I agree on — voting never goes out of style. Head to the link in my bio to grab the Tie Die Concert Tee created by @joe_r_perez for our Believe in Better collection. And be sure to head over to iwillvote.com and make your plan to vote.

British pop singer Dua Lipa gave words of encouragement for those who participated in the Albanian American rally for the Biden campaign last Thursday and who will be voting in the general election next month.

Thank you Dua Lipa for joining our Albanian American rally tonight for Joe Biden and using your voice to get out the vote! #VoteBidenHarris #dualipa @dualipa @dukagjinlipa

Posted by Albanian Americans for Joe Biden on Thursday, October 8, 2020