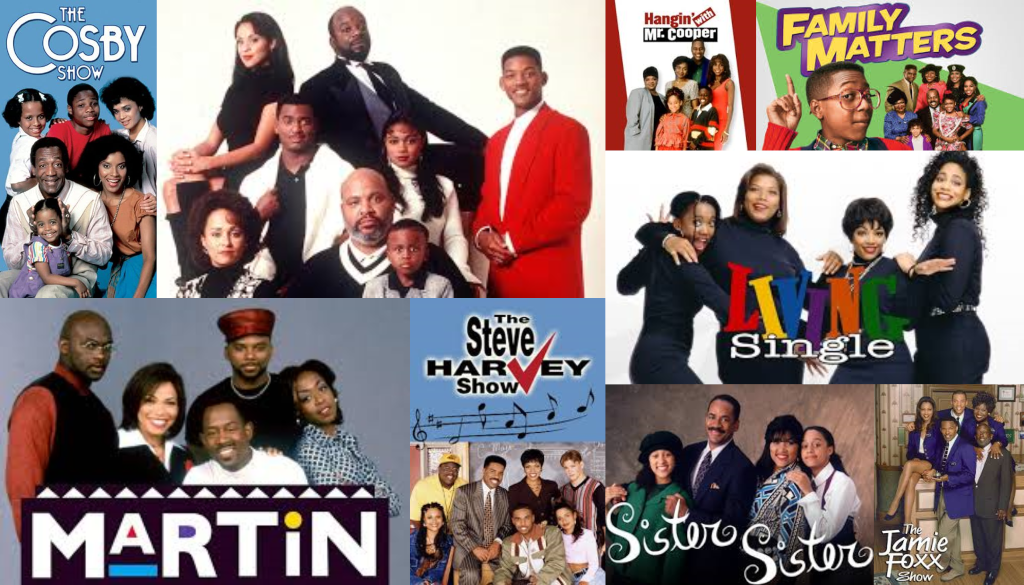 We are all sick to death of hearing Black people referred to as suspicious, intimidating or threatening, for no other reason than being Black. Walking. Jogging. Driving. Asleep. Unarmed. Just Black.

With the litany of Black 90’s sitcoms, representing the full spectrum of Black life, there really is no excuse for the willful ignorance that causes people to negatively profile and stereotype us.  So, for anyone that didn’t tune in to ABC, NBC, WB, CW, or UPN for an education on Black people, below is a crash course on what you obviously missed.

The Cosby Show – a groundbreaking portrayal of the Huxtables. Dr. Heathcliff and his wife Clair, a successful trial lawyer raising five intelligent, independent thinking children in an affluent Brooklyn brownstone was the #1 show on NBC for eight seasons.

A Different World – a spinoff of The Cosby Show, was must see TV, as the resilient and creative Denise Huxtable navigated college life at her parent’s all Black alma mater.

Hangin’ with Mr. Cooper – stand-up comic Mark Curry illustrated the strong and caring character of an ex-professional basketball player who returns to coach and teach at his former high school.

The Steve Harvey Show – before he was a game show host, Steve Harvey starred as musician and music teacher Steve Hightower, a pragmatic yet sensitive mentor to inner city students.

The Fresh Prince of Bel Air – made clean cut rapper Will Smith a household name. Will, the Fresh Prince, was welcomed with open arms by the wealthy and sophisticated Banks family, his aunt and uncle’s Bel Air brood, and raised as one of their own.

Sister, Sister – before their talk show stints as adults, Tia and Tamera Mowry starred as twin sisters separated at birth and adopted by different families. Although strangers, the patient and loving adoptive parents agree to cohabitate for the emotional benefit of the sisters.

Family Matters – introduced us to the phenomenon that was Urkel, a loveable science geek who ingratiates himself to the Winslow’s, his multi-generational next-door neighbors, with a kind and consistent Black police officer as its patriarch.

The Jamie Foxx Show – prior to his Oscar winning performance, Jamie Foxx starred for five seasons as Jamie King, the hard-working and loyal heir apparent to his family’s hotel business.

These shows, and many others, were successful because the characters and situations resonated with us and represented how we see ourselves—mothers, fathers, sisters, brothers, friends and neighbors. You can’t watch The Fresh Prince of Bel Air and not think of Trayvon Martin, who was racially profiled, stalked and killed in his own neighborhood. A sleeping Breonna Taylor reminds us of Khadijah, Regine, Max and Synclair, young creative women in pursuit of their dreams. And, Urkel has never been more personified than in the innocent, pure heart of Elijah McClain.

Now do you see us? Asking for a friend.

5 thoughts on “The Diaspora of Black People Through 90’s Sitcoms: A Required Curriculum for Karens”