Sunday November 28th will ring in the minds of many for years to come. Remembered as the day that the fashion world was rocked. At the young age of 41, Virgil Abloh, Louis Vuitton’s artistic director, has died after privately battling a rare form of cancer, according to a post shared on his Instagram account. “For over two years, Virgil valiantly battled a rare, aggressive form of cancer, cardiac angiosarcoma. He chose to endure his battle privately since his diagnosis in 2019, undergoing numerous challenging treatments, all while helming several significant institutions that span fashion, art, and culture.” His life will forever show that “Virgil was here”. Virgil was a true multi-hyphenated in every sense of the world – a entrepreneur, a DJ, and probably most known, a fashion designer. He founded “Off-White” in 2013 and with that, bridged the gap between streetwear and luxury so effortlessly. Known for his “quotation marks”, Abloh wanted his brand to convey a disconnect from social norms. He wanted his brand to reflect how he viewed the world – “the gray area between black and white as the color off-white”.

Abloh took his label and turned it into one of the most sought-after brands in the world. Collaborations poured in such as Ikea and Nike. He worked with conceptual artist Jenny Holzer to create a line discussing issues such as immigration, cultural integration, globalization, and planned parenthood. And this was just the beginning. In 2018, Abloh made history by becoming Louis Vuitton’s artistic director. The first black menswear artistic director of Louis Vuitton to be exact. This appointment of a black man to such a position in a French luxury fashion house changed the game forever. Louis Vuitton revels in its history, its exclusivity, its traditions. If you look closely, Louis Vuitton almost represented what the fashion world looks like as a whole.

Fashion is a place that doesn’t thrive too much on different – no matter how hard it tries. Fashion loves a simple variation on a simple design- don’t step too much outside the box hence why French houses hesitate to appoint black designers to lead their brands. However, outside of that box was Virgil

At a time when the culture of fashion needed to take a hard look at themselves and confront internal prejudices against POC and BIPOC, Virgil arrived to completely erase that box. This was a box that LV and fashion were just so hesitant to leave. That sort of entrance leaves a legacy like no other, a feeling that we can do better, a return to why fashion can be such a force. When a legacy like that is created, a shift can be felt when it is suddenly gone. How will fashion proceed? Will it take what he has taught and continue his legacy or will we just shift back to the comfortable? We will just have to wait to find out

Reflection on “The Legacy of Virgil”

Everyone knew the changes to fashion Virgil has made. So while he may be physically gone, his presence will forever be a part of anyone who loves what fashion can represent. Celebrities flocked to social media to reflect on the impact Abloh had on their lives.

She wore an Off-White gown to marry Justin Bieber in 2019 – “He was someone who always brought life, charisma, love and fun to any situation, and every room he walked into. A once in a generation creative mind that is so rare and I’ll never forget his impact.”

“Even when the world felt sad, he brought laughter and color and beauty. The way he made a positive impact on anything he touched, and always pushed for his culture/the world is the reason why he was an angel on earth and one to so many. The most beautiful warrior soul. I can’t believe this.”

“My plan is to touch the sky 1000 more times for you…love you eternally brother, thank you for everything.”

“A disruptor and innovator in the truest sense..”

In a lengthy post, in part “Virgil – you were always so gentle, kind, and calm. You somehow made time for everyone”

Kanye worked closely with Abloh and dedicated his latest installment of his Sunday Service series. Virgil was the creative director for the rapper’s design agency, Donda. On Tuesday, November 30, 2021, Louis Vuitton will showcase their Spring-Summer 2022 Collection paying tribute to the life and legacy of Virgil in Miami at 5:30 PM EST. Michael Burke, Chairman and CEO of LV, states, in part, “Virgil was not only a friend, great collaborator, creative genius, visional and disruptor, but also one of the best culture communicators of our times. He paved the way for future generations…” You can read the rest of his statement here. 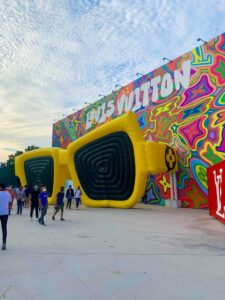 If we know anything, we know that Vigil may be gone, but he is truly never forgotten. May we continue what he started and never forget that outside the box is where life is. May we continue to shake up culture and fashion for years to come. And may we forever be visionaries in a world ready to be disrupted.

Say hi to Chadwick for us.