Moïse was gunned down in his home Wednesday, July 7. His wife Marie also present suffered from multiple gunshot wounds and is currently in Florida. 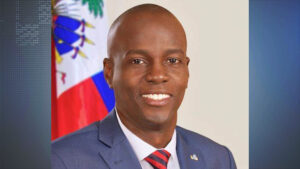 Marie had to be airlifted to Florida and is receiving treatment to her wounds sustained to what appears to have been a hit on the President and his family.

Haiti police chief, Leon Charles, said four suspects had been killed and two detained but some remained at large and a manhunt was still underway, according to BBC news.

At the time of the assassination, Charles described the scene as a battle with the suspects as they tried apprehending them.

“ We blocked the suspects en route as they left  the scene of the crime. Since then we have been battling with them,” according to the BBC news article.

Haitians were urged to stay indoors while police did their jobs in capturing those involved in this attack, which showed up to 20 mercenaries involved and arrested, according to Haiti’s ambassador to the US.

The acting prime minister, Claude Joseph, described Haiti, rightfully, being in shock after the killing of Mr. Moïse.

On the night of the heinous act and assassination, the president’s office and bedroom were ransacked and he was found lying on his back, covered in blood, Haiti’s Magistrate Carl Henry Destin said in a release.

Moïse died at the scene and his body had 12 bullet wounds, according to the Magistrate.

Police officials are working on several leads, one of them being that this was perhaps workings of a paid inside job, where Columbians and Spaniards and some US drug enforcement informants were hired to assassinate Jouvenal Moïse.