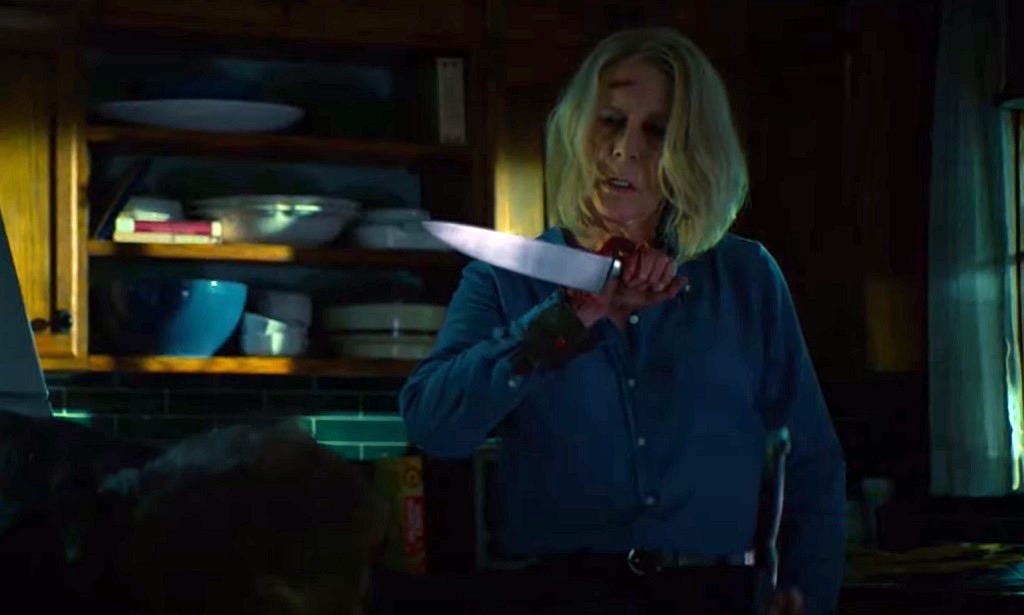 Halloween Ends is the 13th installment in one of the most iconic slasher movie franchises. As fate would have it, this film puts the Halloween franchise at the top for most installments beating out Friday the 13th. Another kitchen knife-wielding meta super-villain seemingly injected with the super soldier serum. 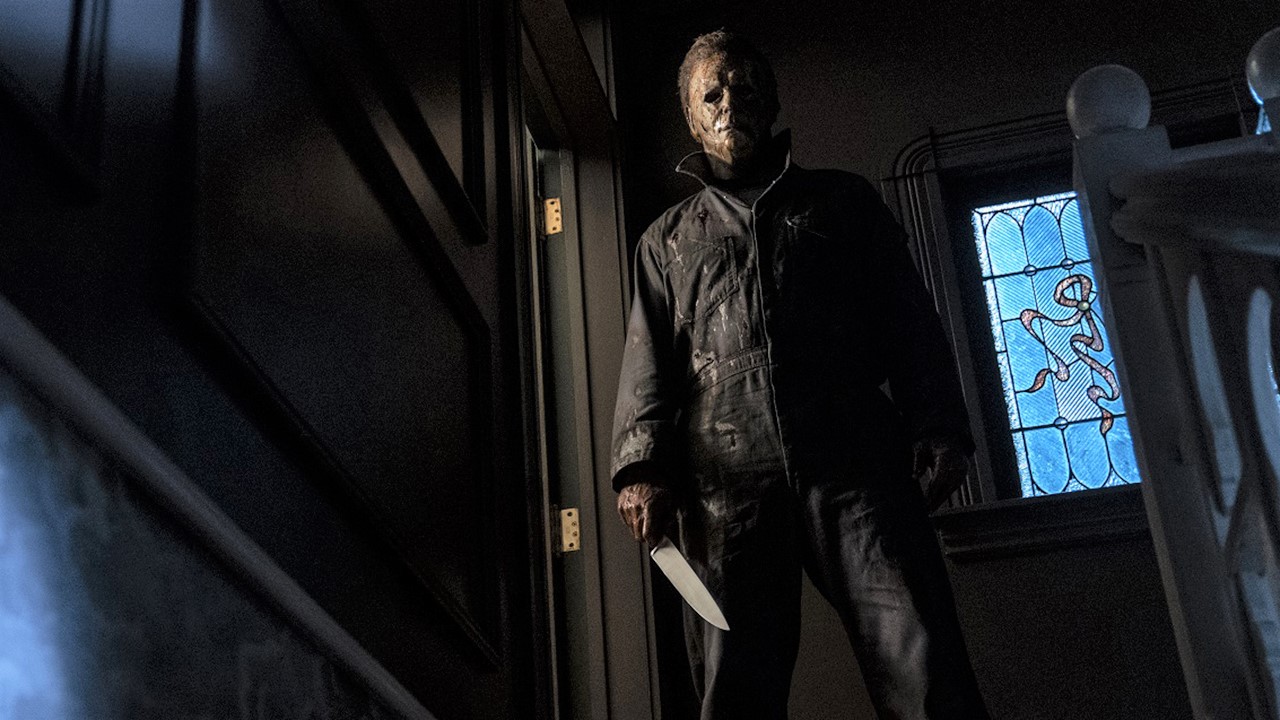 This film and the Halloween franchise are unique from the aforementioned and others because not only is their boogeyman who has become the quintessential personification for horror movie slashers. But, in the case of Michael Myers and Halloween, there is another with whom they share their spotlight. Laurie Strode, played by the de facto scream queen herself, Jamie Lee Curtis.

In this review I will give my rating in the following categories: Characters, story, scares and kills at the end.

Halloween ends, though the 13th installment acts as the definitive fourth entry after a soft boot with the 2019 film by the same name as the original, Halloween. 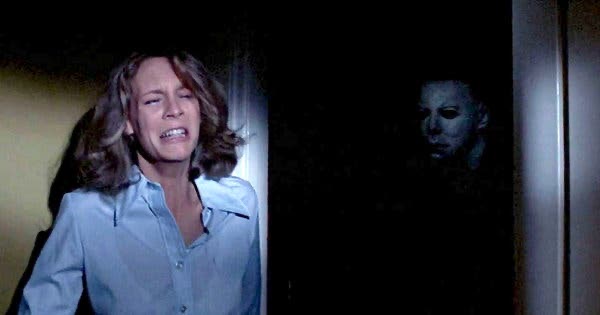 It was promising and brought us once again to the creepy yet charming town of Haddonfield.

After leaving him for dead in a house fire, we are teased with the inevitable sequel to the re-sequel when we see a fire truck heading to the house.

Then we get the candy corn of the trilogy in Halloween Kills. A film that almost kills the entire point of the reboot in the first place. To erase all the genuinely horrible entries such as Halloween Resurrection, Rob Zombie’s version of Halloween, and at least we forget Halloween 2. 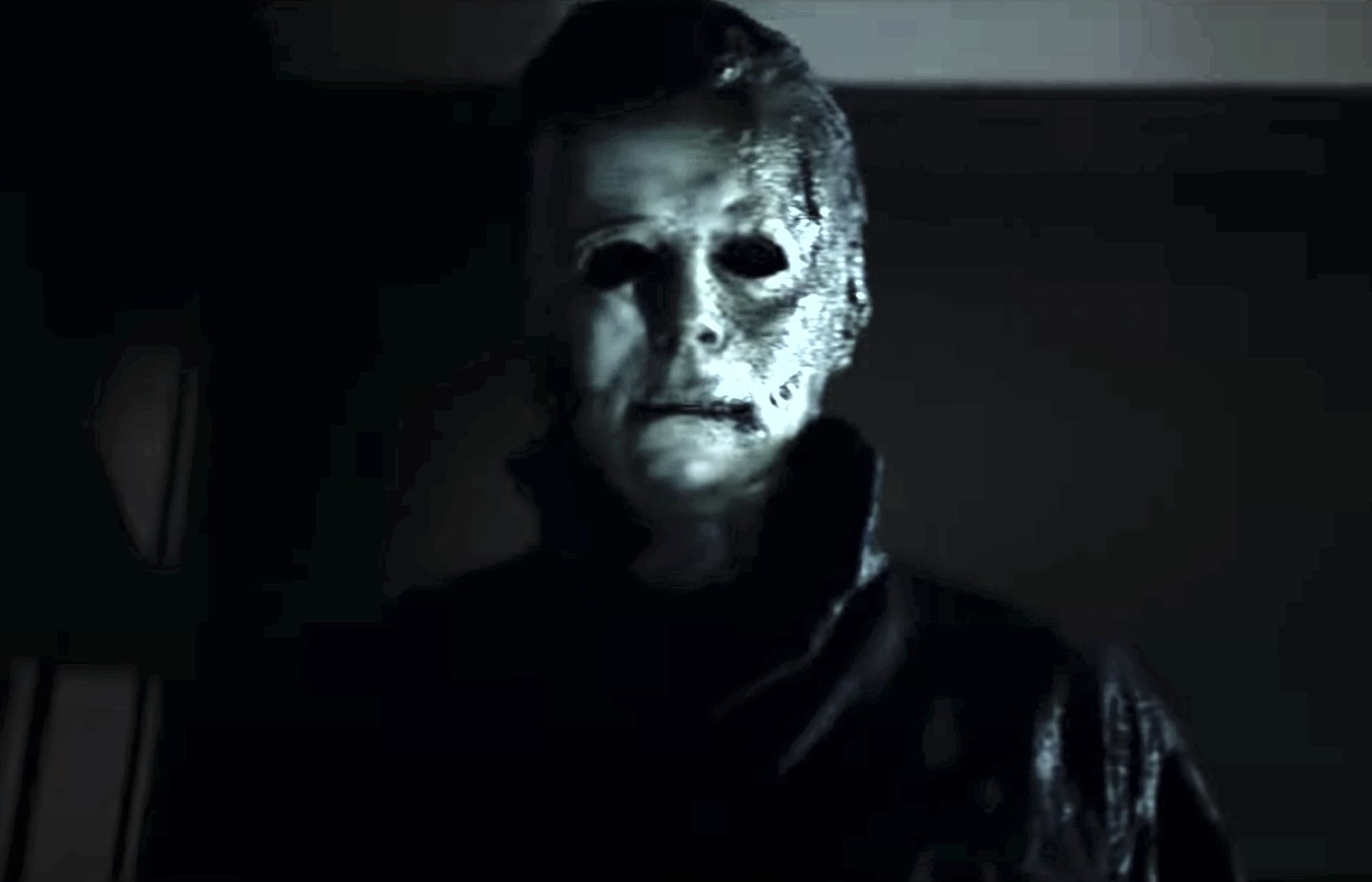 Halloween Kills almost killed the franchise. But us that cannot stay away when we hear that John Carpenter score comes rushing back like some men at sea lured in by Sirens.

So we arrived at Halloween ends, and yup, just like the lure of the Sirens, we came crashing into rocks, to our deaths. Okay, maybe not our deaths, but Halloween ends bright spot is that, well, perhaps it will actually end. 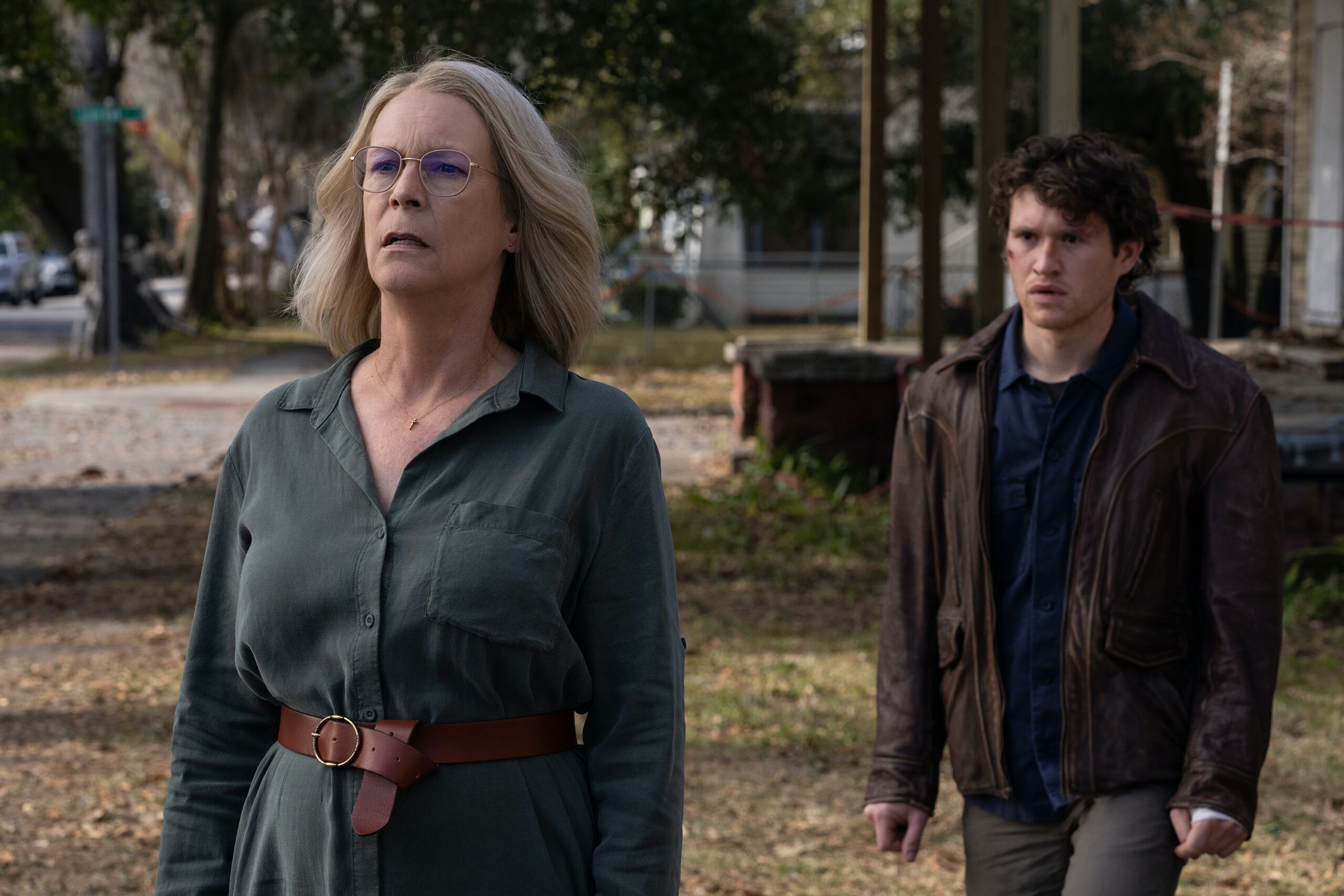 We are introduced to a new term in the opening credits and again via Laurie’s unique passion and lease on life to write a book. The term we learn sets the whole thing in motion is “The Shape.”

This obviously leaves the door open to continue the franchise. 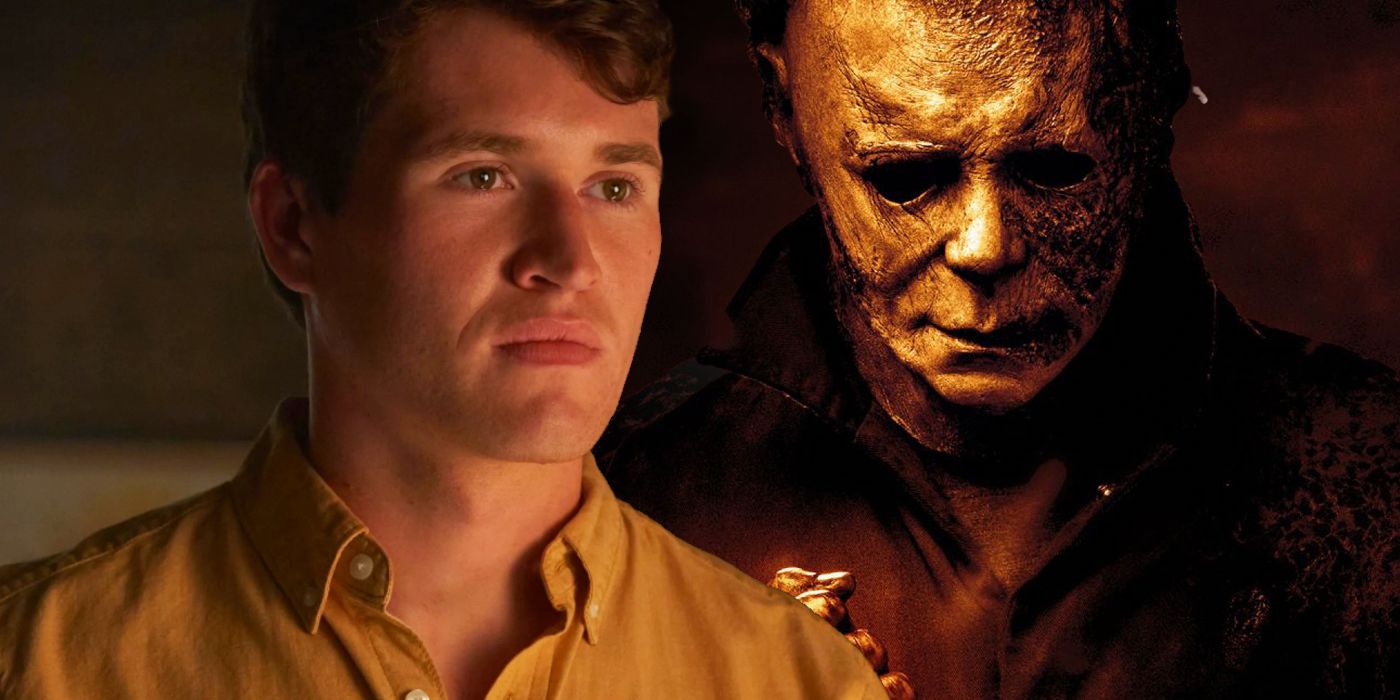 The opening scene introduces us to Cory Cunningham. A kid on his way to college who babysits a bratty little foul mouth kid we all hoped would eat it by the end of the scene.

He does but not by Myers. But by the unassuming, well-to-do Cory after the kid plays a prank to scare Cory. Cory kicks the door open, knocking the kid over the railing to his death in a brutal fashion. A strong start, and it pretty much is downhill from here. * Heavy Spoilers to follow** You’ve been warned. Just as you should be warned when visiting Haddonfield.

Laurie is trying to live in the moment, sober, and dreaming of a simple life. She then runs into Cory after some kids half his size and half his age beat him up at a gas station.

Jamie Lee Curtis as Laurie is fantastic  in this film as well. She even helps enact some sweet revenge by knifing the tires of the little turds who bullied Cory.

Cory, with a wounded cut hand from the altercation, is brought to the E.R. where Allyson works, and she is smitten by his creepy, looks like he is always in pain, boyish good looks, or whatever.

Allyson practically married the guy and had his babies within the first 82 seconds of their meeting.

Not literally, but she’s over the moon pretty quickly and forward as hell. She bags’ her a babe and tells him he will be her date for this Halloween party that she did not have a date to. This is not believable, seeing how forward she was when hitting on Cory.

No sign of our White mask killer with the devil’s eyes just yet. Maybe Haddonfield is safe after all. Well, not exactly. After being spotted and called out by the mother of the foul mouth kid Cory accidentally killed 3 years ago, we see parallels between his life and Laurie’s.

Cory is looked at as a monster, and Laurie is blamed for the havoc her monster caused. 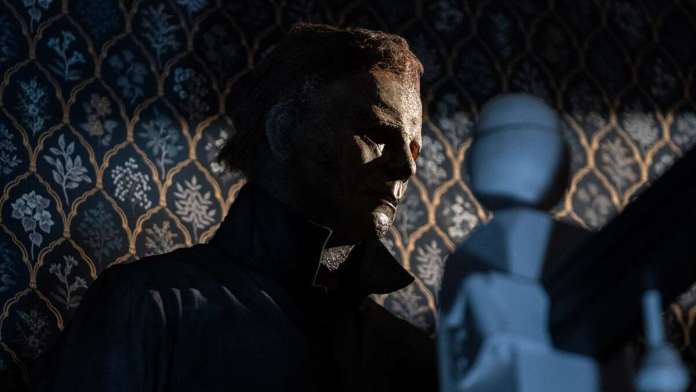 Now it gets really bad. We find Myers lives in the sewer where he takes his victims, real Freddy Kruger boiler room style, I guess. According to a hobo’s words. So, maybe Mike is Jeffrey Dhamering them. Who knows, but we know he is very old and not living well.

Cory runs into him after being beaten up by children again and then is dragged into the sewer. But, surprise, he’s not dead. He faces off with Myers, who now has special powers. Maybe a celestial. I’m not quite sure, but somehow now can professor X people. Or Scarlet Witch him. Michael reads his mind, sees all the pain, and that he murdered that kid and let him go. Cory, seemingly in self-defense, kills the hobo who was curious about Cory’s date night at the Sewer el Myers and gets gutted.

A changed man, he walks with a burn-the-town-down attitude and finds Allyson, who, of course, is totally down to be reckless with a guy she has known for 24 hours. 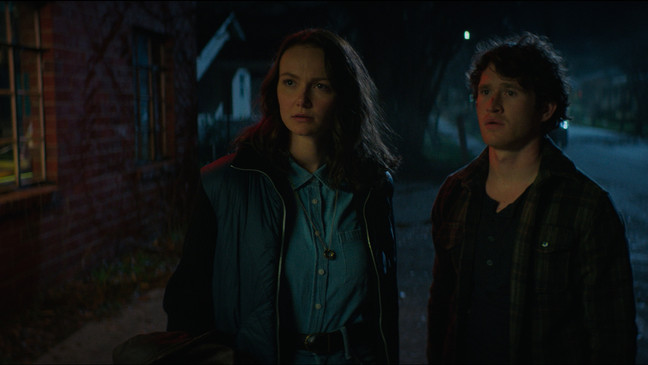 Cory goes on a killing spree as the “shape” of the evil influence of Michael Myers has taken its toll on him and the town. Laurie peeps he has Michael’s eyes and talks with Cory about staying away from Allyson. But, unfortunately, Allyson was not having it and went all Belle Swan on her. 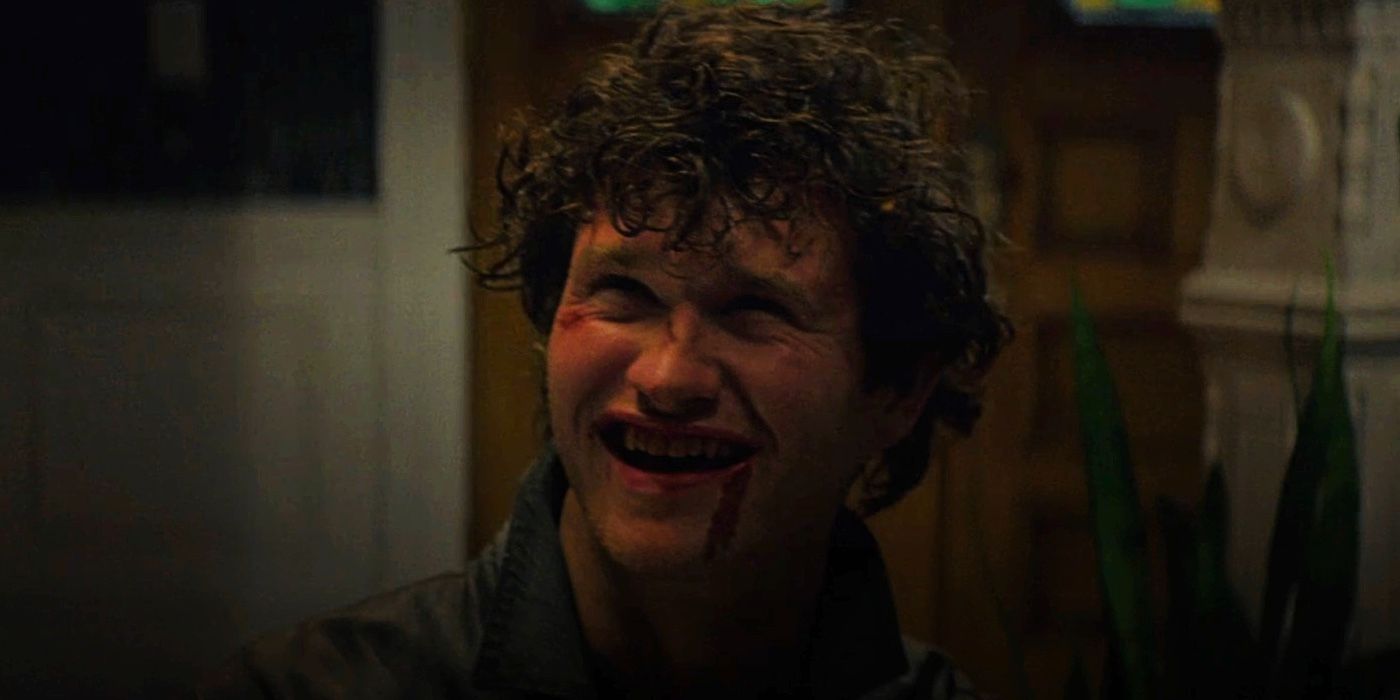 Cory and Myers tag team kills like the Hardy Boys, and Myers, I guess, is rejuvenated after every kill. (Powers, I think). After racking up enough kills, Cory is ready to go full boss level. He wants the mask. He runs to Myers sewer, successfully wrestles Michael Myers, and takes his mask off his face. Let’s pause for dramatic effect.

Yes, Cory, a creepy babysitting killer, single-handedly one-upped the juggernaut that is Michael Myers. The guy who took a beating from the entire town and got up and killed them all. A guy who smashes heads with his boots like they were pumpkins. The guy who survived being burned was shot 6 six times out of the window and got taken down by a dairy of a wimpy kid, Cory Cunningham. It’s like his powers deactivate when he is fighting 60-year women and anyone, I guess, essential to the film’s plot. 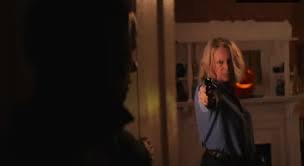 Laurie, being a badass, faces off with Cory and wins. Unfortunately, Cory takes himself out of the equation right in time for Allyson to show up to see Laurie holding the bloody knife over his dead body. Upset with rage, Allyson storms out and leaves. 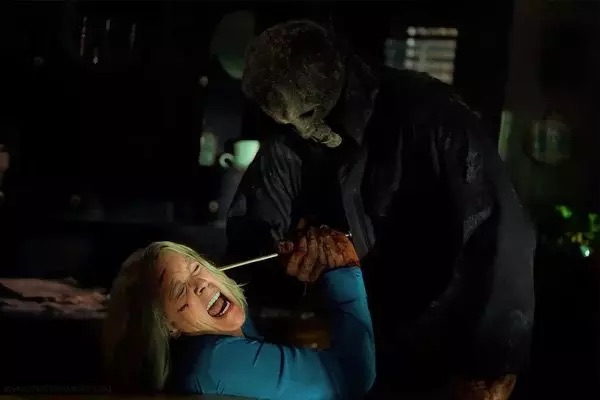 Then our guy shows up. It’s the rematch we’ve all been waiting for. A 60-year woman skilled in arms vs. A supervillain with all types of special powers, including superhuman strength. He bests her for the most part but somehow struggles to do to her what he so easily does to people twice her size and half her age. Nevertheless, with some help from Allyson who returns right as Myers is about to finish her off. Laurie prevails the victor. But this time, she wanted to make sure he was Prema-dead. But the whole town knew it. 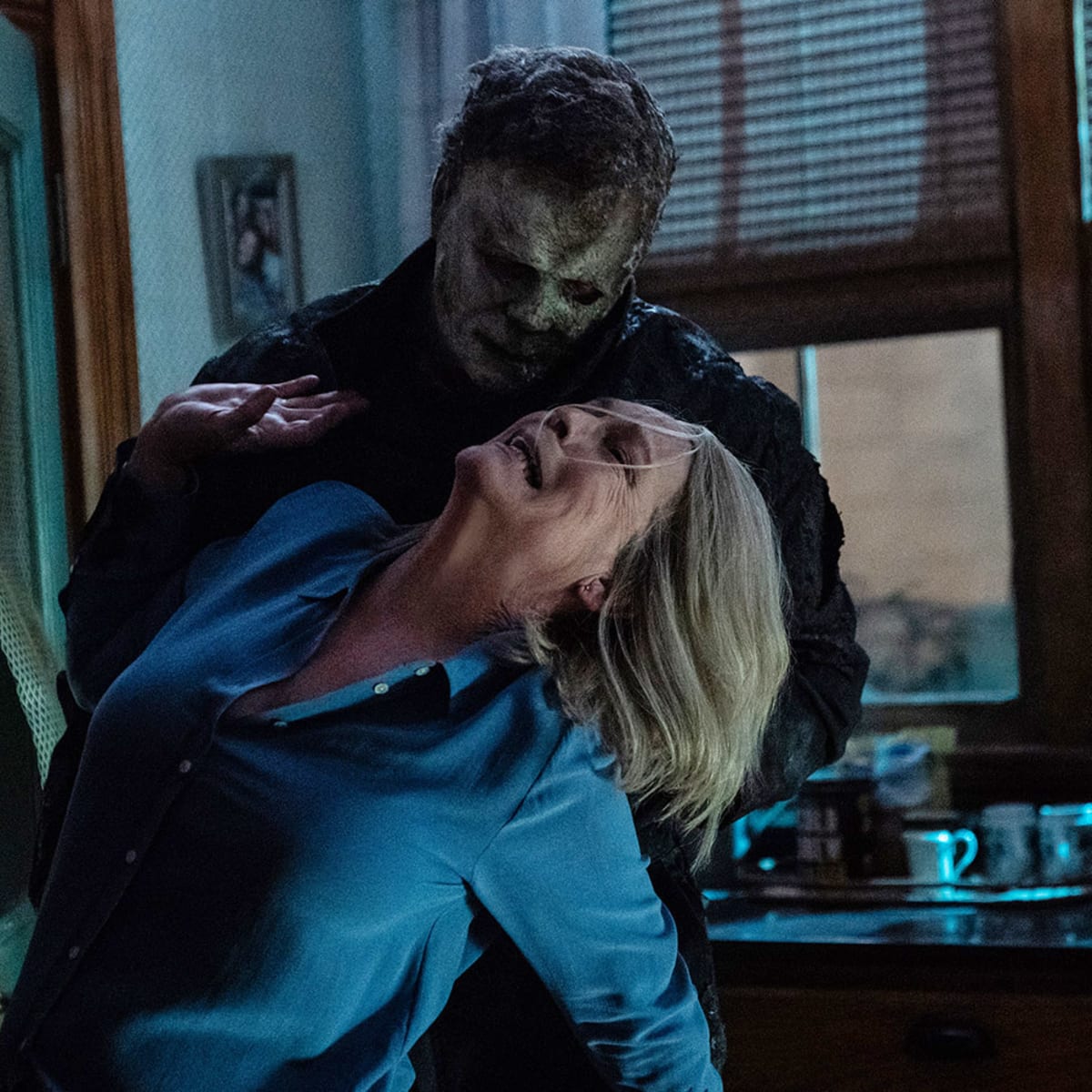 Somehow the news spread insanely quick, and the body of Michael Myers was carried atop a police car, and the entire town walked behind them. Conveniently enough, there is a dump close by that as a trash compactor. There Laurie puts Michael’s body in and watches it shred him. 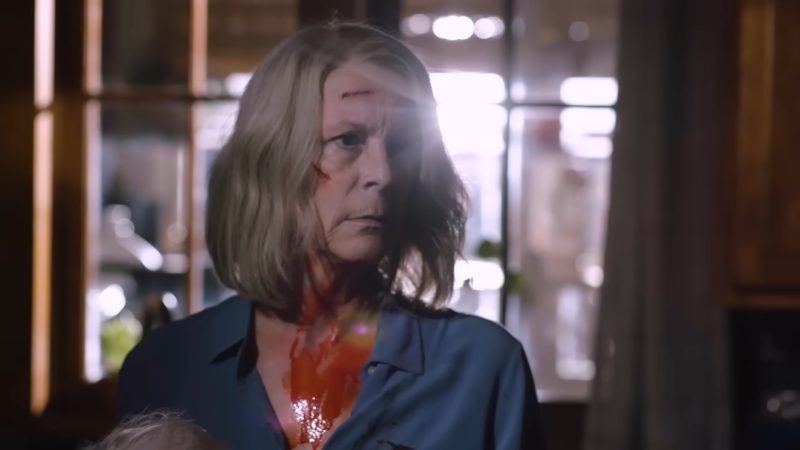 The movie gives a satisfying ending for Laurie, but everything leading up to it is quite disappointing. The viewer is forced to turn off their brain and accept a lot about the lore of the Myers character never previously explored. In doing so you lose a lot of what longtime fans appreciated. We believed Dr. Lumas when he said he was pure evil, but now he is also a mutant? Cory’s turn and Allyson’s role in this both felt bazaar and rushed. Even the events leading to his turn all felt pretty underwhelming. Jamie Lee Curtis was brilliant, funny, and intense throughout. Rewatch value is there, but overall, this is a below-average film.