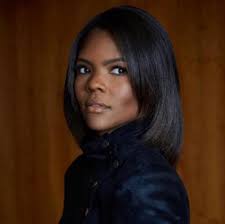 These are the names that Candace Owens, YouTube star and political commentator, have been called since she ’came out’ as conservative in 2017 ruffling the feathers of black America with her radical conservative rhetoric. Yes, coming out as conservative is a thing. According to many black conservatives it has been a thing since the rise in ‘intolerable leftist liberalism’. As they tell it, being a Trump supporter, automatically removes your blackness.

In the black community, conservatives aren’t seen as influential. But Owens is not your typical conservative. She is bold, “incandescent, Bright. Most of all, Owens is courageous,” Larry Elder, Black Conservative, and American Talk Show Host gushes in his stamp of approval for Candace Owens and her new book Black Out: How Black America Can Make Its Second Escape from the Democrat Plantation.

Elder, 68, passes the ‘baton’ to 31-year- old Owens introducing the courageous young woman while echoing her message in the beginning pages. Leave the Democratic party behind and forge a new path of freedom. And Candace did just that.

In 2018, Owens started the Blexit foundation, a social media campaign, to encourage minorities (particularly blacks) to exit the Democratic Party. Many Black Conservatives will tell you there is a rise in conservatism amongst black people.

However, Candace’s support in the black community is minuscule. Her frank delivery rubs people the wrong way. As one of my friends says, she comes off as ingenuine, cold-hearted, and dismissive of the black plight like many other white conservatives aka racist.

Since #Blacklivesmatter resurgence, Candace has critiqued the movement relentlessly. Her videos, arguably mean and out of touch, have garnered her millions of views and media attention. Her most notable video was her tongue lashing of BLM and the worldwide support of George Floyd. That video alone wheeled in 100 million views and catapulted her to be the top conservative voice in America. Her stance on BLM has made Blackout sell like hot cakes.

Yes, Blackout is selling, but is it fulfilling its purpose?

In order for Blackout to revolutionize the way black America thinks. It would have to tell a story. It needs to win the hearts of Black America. The black community wants to see and feel the care in Candace’s book in which they don’t see in her snippets of her raging commentary. Candace must appeal to Black America and explain why she is the way she is. In essence, she must tell her story first.

Candace’s story begins as a child, who grew up in a “roach-infested” apartment. Young Candace was fortunately saved by her grandfather, uprooting her family from the inner city to the countryside. It was Candace’s grandfather who instilled the values of “hard-work”: “pride”: and “strong [Christian values]” in her life.

In her early teens, Candace’s family moved from her grandfather’s house to the city in which she struggled with her own identity. Readers and retractors get to see how Candace becomes the Candace of today.

She tells the tale of a young woman who made something of herself by letting go of the “victim narrative” that “Democrats [try to stick] on black identity:

Democrats see inherent racism and struggle in nearly everything, thereby, destroying nearly all racial progress that has been achieved thus fur. The sad truth is that nearly every policy they promote invariably harms Black America. Indeed, there is something about progressive policies that always leads to regressive results for Black America. But what if black America simply refused their offers? What if we formally rejected the victim narrative, thereby rejecting the slow poison of leftist policies? …..Could we, collectively, make a return to our conservative roots?

Throughout the book, Candace challenges the notion of what it means to be black. And how the breakdown of the black family is the root cause of stagnation that plagues Black America not racism. She does that by dividing her argument in 11 digestible chapters– Feminism, Culture Education, Faith, etc. Owens ultimately believes welfare, democratic leadership/policies, and cultural beliefs keep Black families broken and ravished.

In return, Candace names the Republican party and Trump as the ultimate solution for Black America, but somehow the few pages she uses to convince Black America that Trump is the “leader for us” does not seal the deal.

Ultimately, we have to give it to Candace. Owens writes a compelling argument that will force Black America to rethink their allegiance to the Democratic Party. She tells her story while backing up her points with facts, historical context, and anecdotal evidence.

Although Candace is able to write persuasively, Blackout doesn’t leave you with the clear decision to leave the Democratic Party in good conscience or in good faith. While Blackout comes up short, it does bring the conservation to the national stage. Why should Black America be invested in a party that yields minimal fruit for Black labor?

I will leave that answer to you.