The best enemies to friends storylines on TV happen when friendships form unexpectedly after past rivalries. Television shows in every genre can develop these tropes in ways that change characters’ story and make shows even more appealing.

These are some of the best enemies to friend stories to grace television screens with characters who start off at odds but later become best friends and fan favorites. 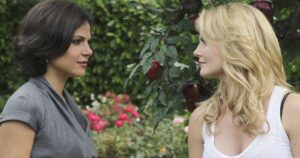 Regina, the Evil Queen from the Enchanted Forest who released the Dark Curse, initially wanted to kill Emma. With no desire to co-parent their shared son, Henry, Regina believes Storybrooke would be much better off without Emma, who has the potential to break the Dark Curse.

Emma’s desire to help Regina have a happy ending builds their friendship, and Regina transforms into a friend who doesn’t want Emma to turn to darkness. In turn, Emma accepts the darkness to protect Regina. In the end, these enemies turned friends became magical family members. 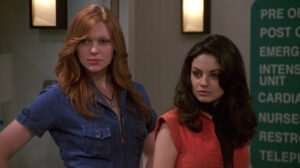 Jackie and Donna couldn’t be a more different pairing. Jackie is the superficial and annoying character dating Michael Kelso while Donna is the laid-back, witty feminist dating Eric Forman. When Donna begrudgingly accepts Jackie as part of their friend group, they start to complement each other in unexpected ways.

They continued to butt heads, but they always had each others’ back. As they grew up, they learned from their differing perspectives, and their friendship was much of the glue that kept all the friends in the group together.

The war for Rafael’s affection resulted in a series of ongoing battles between Jane and Petra that were oftentimes petty and hilarious. Jane convinces herself that Rafael wants to be with her, and the callous personality that is Petra won’t let up either. For much of the show, they focus their energy on picking the other apart.

When Rafael goes to jail, Petra and Jane realize that they actually care about each other. Jane brings out the humanity in Petra and Petra becomes a support system for Jane, motivating her to boldly go after the things she wants in life. The depth of their complex friendship becomes as central to the show as the character’s romantic pursuits. 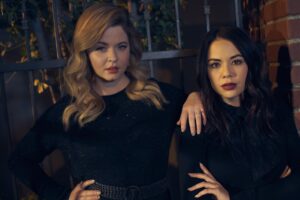 Mona and Alison were hell-bent on destroying each other’s sanity. With a sordid past that included Mona stalking Alison under the alias of “A,” a decision that was comparable against Alison being her bully, the possibilities of a cordial interaction seemed unlikely. But as Pretty Little Liars ended, it was noticeable that their feud was dying down and starting to evolve into a possible friendship.

The chemistry and story between these two characters led to a fan-inspired moniker, “Monison,” and they reappear in the spinoff, Pretty Little Liars: The Perfectionists, where they work together and a true friendship blossoms. In The Last Airbender series, Aang and Zuko were mostly enemies because of Zuko’s personal mission to capture Aang. Because Aang didn’t hold the same animosity towards Zuko, his ability to look beyond Zuko’s flawed logic eventually gets through to his nemesis and changes their relationship for the better.

Zuko ends up saving Aang from Admiral Zhao, and the two become unstoppable firebenders together. The end result was firebending that changed the world and a best friendship that is standing the test of time as a fan favorite.

Tara Chambler becomes even more loveable when she opens up to Eugene as a friend. While Eugene was falling out of favor as a deceitful character who only looked out for himself, his friendship with Tara brings out a better side of him, leading him to take the ultimate step of courage by saving her life.

Together, Tara and Eugene added unexpected moments of comic relief and became everything that was rig​​ht about friendship during a zombie apocalypse. 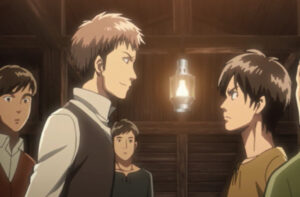 Eren and Jean were arch-enemies from the day they met. As characters with two different motives, Jean immediately rejects Eren’s spirit of comradery, opting instead to overpower him in skill and ability in the Police Brigade.

Their friendship blossoms as their arguments begin to take a backseat to more pressing issues. Throughout their tumultuous relationship, which was made even more fragile by admissions of guilt and betrayals, their trust in each other deepens the show’s plot and shifts the social dynamics for every member in the Police Brigade.

3/10 Will and Carlton (The Fresh Prince of Bel-Air) 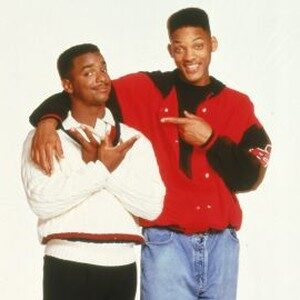 When the cool and streetwise Will first meets his conservative and well-to-do cousin, Carlton, the two are destined to disagree. They didn’t have much in common besides the ability to make jokes at the other’s expense, but over time, the bond that developed between these cousins allowed them to navigate some of the toughest circumstances and conversations in their lives as they grew from teenagers into adults.

The jokes never stop coming, and while they don’t see eye-to-eye in many situations, their love and concern for one another helps them support each other in the face of violence, racism, family disputes and failed relationships.

2/10 Jaime Lannister and Brienne of Tarth (Game of Thrones) With her fighting abilities and unbreakable loyalty, Brienne of Tarth was already a well-loved character, unlike Jamie Lannister, who was known to be self-centered and immoral due to his ties to Cersei and his decision not to protect his king. Their friendship begins unexpectedly when Jamie loses his hand protecting Brienne.

Brienne later saves Jamie’s life in Winterfell by vouching for him as an honorable man. Their friendship reveals the complexities of both characters in ways that show Brienne’s softer side and helps everyone to believe that Jamie can be the honorable man Brienne believes him to be, despite his earlier misdeeds. One of the pair’s most unforgettable moments happen when Jamie defies their social traditions by knighting Brienne at a time when women could not be knighted. Before the popular sitcom Friends, there was Living Single, a sitcom about a group of single friends living in the same brownstone building in Brooklyn. The ongoing bickering between Maxine Shaw and Kyle Barker usually happened because her intellect and progressive lifestyle often collided with Kyle’s pretentious behavior and misogynistic views.

In the rare moments when they weren’t taking jabs at each other, the growth of their friendship becomes evident over time. The undeniable chemistry and groundbreaking romantic scenes that takes this duo from enemies to friends then lovers who eventually start a family make Maxine and Kyle an exception to the rule of just enemies to friends.