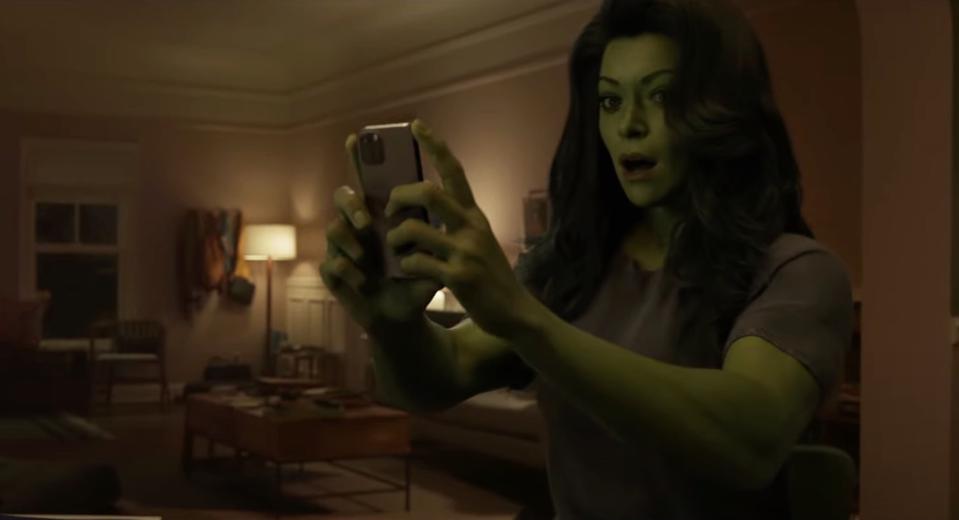 She-Hulk smashed into our lives and left us entertained. The recently wrapped season was filled with absurdity, self-discovery, and of course, bashing things. With such a campy kind of series, you were either along for the ride or not. Here are the top 8 moments from She-Hulk: Attorney at Law

The Arrival of She-Hulk

A Sakaaran spaceship swoops down in front of Jennifer’s car, she veers off the road to avoid hitting it, and the vehicle rolls down a cliff. In an attempt to help her cousin, she gets some of his gamma blood in an open cut on her arm. Though we viewers already knew what she was going to look like, there’s always some anticipation of how we’re going to be introduced to this character on the screen. Perfectly it was done in this blurry silhouette on the reflection of the wrecked car.  We can see, but we can’t see, and that’s a direct response to how Jennifer is feeling in that moment of confusion. She doesn’t know what’s happening to her, so she bolts as the She-Hulk.

Bruce wants to guide his cousin through the steps of Hulking because he had to learn the hard way. He also learns that Jennifer can retain her personality effortlessly. Now, for the fun part, The Hulk teaches She-Hulk some fighting moves. In a series of scenes, we see yoga (it’s important for hulks to find that inner peace), we see them pound the ground, boulder throwing, and the Thunderclap (she did struggle with this one). All of which She-Hulk is excelling at compared to the Hulk having to go through trials and tribulations over the years. In his jealousy, he pushes She-Hulk off the cliff, and she responds by flipping him off. Because She-Hulk thinks her life is ruined to lighten the mood, Bruce teaches her that Hulks can’t get drunk.

This was a fun teachable episode between competitive cousins. Jennifer didn’t ask for this, and we see her trying to figure out what life is going to be like with this green-gamma woman.

I wouldn’t say I’m a twerking aficionado, but when She-Hulk was twerking with Megan Thee Stallion in the post-credit scene, it brought me delight. Why?

Never thought fashion would be a thing in the MCU, but here we are. She-Hulk needs tailored clothes to fit her 6’7″ frame. Her roll-with-the-punches friend and coworker Nikki Ramos is going to have her looking fly, so she enlists the help of their other friend and coworker Pug to see if his sneaker plug knows where they can get some custom clothes made. They find this very secretive location (Nikki and Pug had to know a password and everything) and convince the voice coming from the intercom to style She-Hulk by saying she’s an Avenger. In later scenes, when She-Hulk shows up, we meet Luke Jacobson, the fashion designer of the Superheros. This is great because when you think about it, a superhero or villain does need someone to make their clothes but also keep their identity secret. We never think about where they’re getting their outfits. He’s a nonsense high-brow designer, so don’t waste his time. He’s busy. The perfect addition to the She-Hulk series.

Jennifer Walters, best friend, and colleague Nikki Ramos has her back. We all need a friend who would go hard like this for us. We are getting away from making women the enemy of women. You know, the whole women will be catty trope. Nikki helped get her fit together, Nikki did detective work to figure out who Inteligencia was, Nikki tried to help her go on dates, plus more. Nikki is that one. Minus Titania, being a menace (which she did well) to She-Hulks life and an overbearing bride at a wedding. The series kept things between women professional, kind, playful, and supportive.

Originally he was a colleague who had a crush on She-Hulk in the comics. I don’t feel that’s the direction they’re going with him in this series, but I can see a little crush vibe, so what do I know? We still need more of him. We did not see him much throughout the season, but when his friends needed him, he was there. He has a cool calm and wit to him that was infectious, but also a nice balance to all the chaos, if you will. And for those that care, he was a sneakerhead.

We all were anticipating when Daredevil would show up, and they didn’t disappoint. Though I didn’t watch Daredevil when it was on Netflix, I am happy they brought actor Charlie Cox back to play him. Watching the smart, witty, and badassness of Matt “Daredevil” Murdock interact with a smart, witty, a little bit taken Jennifer “She-Hulk” Walters was super cute. The span of their interactions was a courtroom, the local bar, a fight Daredevil vs. She-Hulk, a tag team where they both went against the Leapfrog goons, a nice hook-up scene that includes a “walk of glee, “and a nice meal with the family. Maybe the relationship works out maybe it doesn’t in seasons to come, but it’s nice to see Jennifer find someone who accepts her. She’s been through the dating ringer throughout this season, so she deserves a little happiness.

She-Hulk breaks the 4th wall and goes on the hunt for changes to her season finale when she realizes there’s too many storylines going on that don’t make any sense. With that being said, the finale felt like wasting time. Screen hopping to Disney’s California headquarters to rewrite the ending. I didn’t want to spend a lot of time there, but we did. Why is this moment still a highlight? Because it was clever.  My expectation was an action-packed ending. It’s very easy to fall in line with the comfort of things and not want change. But the superhero end doesn’t always need to be predictable. In fact, that was the whole point of this ending to poke fun at a lot of the typical things in the MCU, so I had to get over myself.

The savagely stunning green 6’7” superpowered hulk/Jennifer Walters, in the end, finally figured out how she wants to move in the world. If anything, this series is about the discovery of who you are and embracing that, so be on the lookout for what else She-hulk might do in the MCU.