At age 84, Colin Luther Powell, the first Black U.S Secretary of State dies from a weakened immune system. USA Today reports Secretary Powell was fully vaccinated but was previously diagnosed with a form of blood cancer known as multiple myeloma.

A Quest for Greatness

Former Republican and decorated official Colin Powell joined the Army while in college. Powell proved himself dedicated to his military career. With each tour in the military, his devotion and level of excellence set him apart. His drive propelled him forward leading him to become the first Black U.S Secretary of State.

While enrolled in City College of New York, Secretary Powell decided to begin his military career. CNN lists some of the accolades that General Powell received during his career. Some of Powell’s honors include two Purple Hearts, two Presidential Medals of Freedom, the Secretary of State Distinguished Service Medal, and the Lincoln Medal. He also received an honor from Queen Elizabeth. 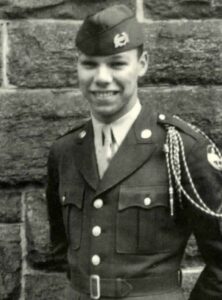 Secretary Powell’s career projected upward on a consistent basis. After several promotions in the military, Powell became National Security adviser to President Ronald Reagan. Powell went on to work under President George H. W Bush as a Joint Chief of Staff. He faced scrutiny after he pushed for the Iraq War during the presidency of George W. Bush.

General Powell remained a revered public figure in both military and political arenas.

After retirement, Powell’s political stance would change greatly. He put his highly regarded reputation to use by endorsing Democratic officials such as President Barack Obama.

Remembering a Man of Honor

The City College of NewYork, where Powell hailed from shared a heart-felt message on the school’s website.

“General Powell will be remembered as a man of extraordinary accomplishment: a trailblazer, a role model, and an inspiration.”

Powell formed the Colin Powell School for Civic and Global Leadership. The school named for General Powell, is ran under his Alma Mater.

With the untimely passing of War Hero Powell many are taking the time to remember his legacy. 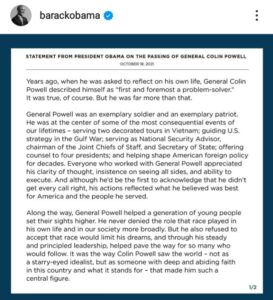 “Although he’d be the first to acknowledge that he didn’t get every call right, his actions reflected what he believed was best for America.”

Vice President Kamala Harris also sent her condolences to the family of the decorated official. She shared a recent picture of the two of them together while attending a special dinner in July of 2021. 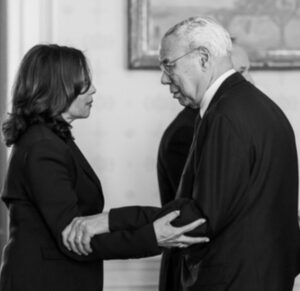