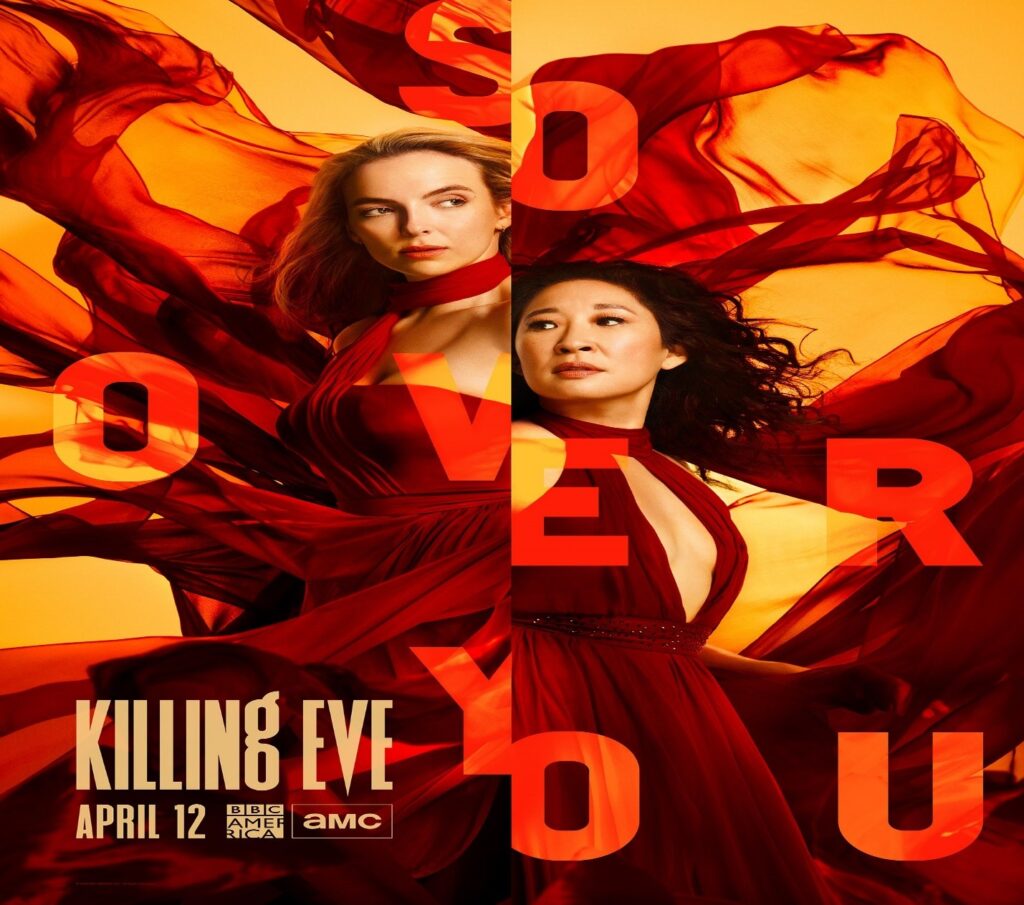 BBC’s hit series Killing Eve season 4 is a highly anticipated show, with many fans waiting for it, yet its release date is unknown. However, season 4 writer Laura Neal promises a thrilling new season that will begin filming in June 2021.

The Latest Scoop on Killing Eve?

This hits series has all ears for more tea…

Surprisingly, never saw a series like this one. I practically binge-watch every season of the entire series, it’s my lazy Saturday quarantine comfort. If you want to relax from a long workday, I recommend this series.  It keeps viewers anticipating and highly speculating. Season 4, coming near, it’s perfect timing to do a deeply intricate review. Fans seek this million-dollar question. Our favorite Villanelle, what’s next?

What viewers can expect in Season 4…

Is there a new angle?

So, yes, Heathcote, season 3 writer says, it involves risk. In season 3 Villanelle decides she no longer wants to kill for a profession. But where will she go next? Villanelle, always full of surprises, is the mastermind assassin of the 12 here.

Neal, season 4 writer, says, she will incorporate the overarching theme of chaos, as the previous seasons have, in exception to season 3. That said, many viewers question. Where exactly did Killing Eve get its chaotic inspirations? Shannon Murphy, director of the series, says her childhood in Hong Kong.

For instance, Murphy spent her time in creative arts in Hong Kong. She felt it was often portrayed wrong. In Hong Kong, she was like a foreigner. However, Murphy is intrigued by the complexities of stories and enjoys complicated and high nuance creativity. Murphy put in the effort to be colorful in her work, “making colorful plots is always the goal,” she said. Killing Eve is not her only project. Murphy directed other films and series like, Babyteeth in 2019 and a four-part Australian mini-series called On the Ropes in 2018. Her previous projects were dramas, just like BBC’s hit series, Killing Eve.

What critics are saying on Season 4?

Critics are stirring up talk on upcoming season 4. They say that the riveting excitement once found in seasons 1 and 2 of Killing Eve died in season 3. Fans urge season 4 writer, Neal to bring back the thrill. At the beginning of season 1, viewers see the continuous game of cat and mouse between two characters Eve Palestra, (Sandra Oh) and Villanelle (Jodie Comer). Many viewers were excited to watch Eve Palestra work for the M16 as a British intelligence investigator continuously trying to capture psychopath assassin Villanelle, who works for an assassin group called the 12. Killing Eve’s season 2 finale, even better, it ended in Rome, where Villanelle shot Eve and left her for dead.

Also, what made it fun to watch was not just the trial and error of the chase. To see these women on opposite sides, continue to face their internal conflicts on feelings developed for each other was intriguing. https://variety.com/2019/film/festivals/babyteeth-shannon-murphy-the-strays-killing-eve. The more they pull from one another, the closer they appear to become. The Season 2 finale episode left many questions for viewers to anticipate for season 3.

What’s next for the series…?

Because, season 3 spin-off headed in a drastic misdirection for a lot of viewers, On TV, Villanelle did not appear to be living such an extraordinary free life of thrill. In actuality, viewers saw another side to her. While she had money and wore the highest fashioned clothing, as the show goes deeper into season 3 her character changes. Villanelle is no longer content with her life anymore as an assassin and begins to question if she ever wanted to be one.

What happens For Villanelle ….?

Villanelle wanted to have as much control over her life as perceived to be, but she simply did not. Not necessarily because others around her wouldn’t allow it. Villanelle had her psychopathic ways where she lived in her reality, a reality where she made up and lived by her rules. Villanelle has a massive ego, full of charisma, with a lack of consciousness. However, she sees no wrong in all her killings, she gets so enthralled with her victims, and her crime scenes, she could care less who saw what, and she has done too much damage to be saved. Villanelle knows there is no going back for her. Villanelle has proved herself to be her own worst enemy, whether she chooses to see it or not:

Right-click on the mouse, choose the option open hyperlink to view the video clip. https://youtu.be/juhrIGz7Q0Q?list=TLPQMjMxMDIwMjDCUVxsp7ZRow.

Cinematic highlights from Season 3 finale to note for Season 4

In addition, Jodie Comer and Sandra Oh were guests in an interview Q and A, where they discussed specific highlights on season 3. Jodie Comer, Villanelle, goes deeper into this notion, Comer spoke of her fascination with her character Villanelle’s intrigue with Eve. Like, Comer mentions how she is learning so much of Eve’s acceptance towards Villanelle, the embrace from Eve, she matures Villanelle like a finesse to her at the Bridge, their saying let go,” Jodie says. The viewers see the growth in the realization among the women in the season 3 finale. In a highlighted scene, the two are on the bridge, and they both walk away from each other.

Furthermore, Sandra Oh commented too. In the interview Q and A, Oh goes deeper into what her character Eve was feeling. At this moment, on the bridge, “she is reflecting on her old life, she understands that she cannot have that life again… she leaves Villanelle,” Oh said. From where season 3 left off, both characters have tested each other to their endpoint. Everybody has a limit, right tested, they count on each other.

Can Neal bring back the thrill viewers once saw, as it is no surprise season 3 got the series lowest rating yet with a mediocre score of 7.1? It is an understatement to say, they have room to do better. Viewers need to feel that suspenseful thrill again. Could this series have to face the music that this show ran its course? It’s interesting how Comer anticipated, in season 4, Eve and Villanelle’s relationship remains central to the storyline, but viewers will grow tired of it sooner than later. Killing Eve, once spontaneous series, has become a bit predictable.

Are they killing her off, softly?

Their cat and mouse scenario is quality entertainment but is it strong enough to carry on this series? Another observation made by viewers, why Villanelle’s character has a lot of growth but not Eve’s. Critics wonder about Eve and her stagnant role. Even Sandra Oh herself pondered this notion in her recent interview. A viewer asked both actresses, “What would you like to see next in your character from season 4?”

“Not to treed territory that we already explored… that cat and mouse dynamic, at the very end they turn to each other and realize they are the only ones they can trust but where do the characters go from there,” Oh says.

So, the actress is feeling worn out from this simple dynamic. Why, because the complexity that the director of this show Shannon Murphy says she loves so much she has to incorporate in her series more, viewers need to see this love for complexity in Eve’s character too, not just Villanelle’s. Comer’s response to this question for her character Villanelle was brief but interesting:

“That she evolves and the opulence… she has shifted as a character… pick up from there listen to it,” Comer said.

Where else are speculations rising for the series?

Firstly, the lack of diversity in the writer’s room, as the show currently consists of all white LGBTQ writers. Let us hope to see some much-needed action for change here. As the director, Murphy says, she aims to be colorful, well this could not be any more of a coherent example of a good creative mechanism to liven up the thrill to season 4. If anything, more diversity to the writer’s room is the missing ingredient, here. Here is why: it will enable more space, growth in variety to the show.

Secondly, season 3 lacking suspense mostly within the main characters, viewers noticing a stagnancy coming to the surface in the show. Because adding diversity in writers, will surely create more substance and excitement for the show. This is all fans of this series are asking for. Plus, it will allow the characters more room for growth, which is essential, to see the characters step out of their comfort zone, be spontaneous again! Viewers love it, what more of an answer do they want?

…Stay tuned, as I expect the unexpected season4!

In conclusion, season 3 was disappointing and dry, true. But, writers have still produced rich, organic content, for seasons 1 and 2 beating the stereotypical norm of women on T.V. This series encourages actresses to use their platform and power to tell unique, difficult, challenging stories about female characters on screen. Villanelle’s Character is anything but normal. However, views stay high. Change with the perspective of women on T.V. could happen quicker than perceived. https://youtu.be/4ptQPER26Bg.There is potential, Shannon Murphy has created a new and tangible groundbreaking work for women in Hollywood with this series.

Nina Indigo is a storyteller: digital journalist for FunTimes Magazine and a contributor to InClub Magazine. She writes for the health and wellness segments. She loves poetry creative-writing and research. In her articles, she provides her readers with organic content for people of all backgrounds and communities, she is truthful, writes to empower and inform. She helps readers make their best holistic decisions in their lives communities and societies. In 2021, she will obtain her BA in English Writing, with a minor in African and African American Literature Studies. To follow up on her latest articles go to FunTimes Magazine.com under the health and wellness or google Nina Indigo @:linkedin.com/in/Nina-i-140973146. Nina Indigo's Tea provides to her readers a how, and why holistic health is not just important, it's a necessity to our whole well-being.