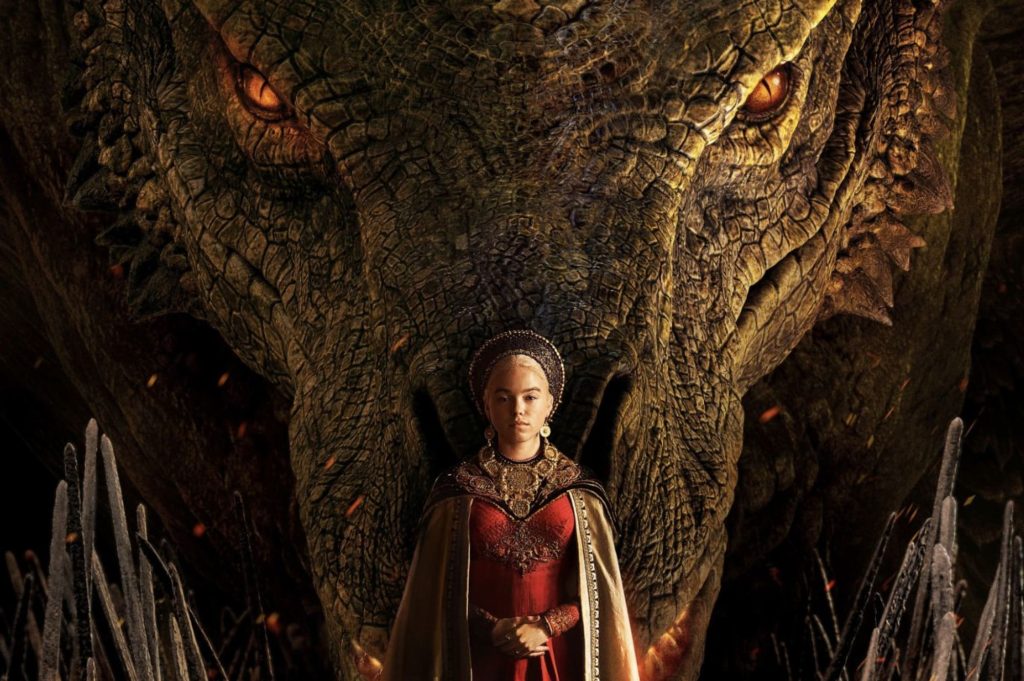 There will be throne spoilers!!

3 years after the most epic show, “Game of Thrones,” left our tv screens HBO is flying us back into Westeros with a premiere prequel of “House of The Dragon.” If you’re like me, you were loyal to “Game of Thrones” and its beloved characters even though they tried to do us dirty in the end with some pish posh writing. Overall, the show and its cinematography were undeniably great.

Due to the attachment to those characters, I didn’t know how to feel initially about House of Dragons and getting to know a whole new cast. Yes, it has dragons, fire, sex, blood baths, all of the above, BUT do I still care?

I’m 100% indifferent. The premiere episode was good, but I wasn’t filled with this overwhelming excitement. Has the thrill of it all worn off? Here’s a brief rundown of last night’s episode.

The Heirs of the Throne

We are back in King’s Landing, and it looks beautiful. This is the story of the Targaryens, and they reminded us this was 172 years before Daenerys Targaryen. So kiss your hopes of any cameos goodbye.

We learn that an aged King, Jaehaerys needs to pick a successor to the throne because his two sons have died. There were 14 candidates, but ultimately it came down to his eldest descendant Rhaenys, a woman, and his eldest male descendant Viserys. He chooses Viserys. You know those old heads aren’t ready for a woman to lead. This is already setting the tone for a throne power struggle, for we hear the voiceover warn us

“The only thing that could tear down the House of The Dragon was itself.”

Are you all paying attention?! Fast forward to GOT and think about who brought down the house in the end. Just saying!

Alright, 9 years have passed King Viserys is doing his thing, and overall he seems like a nice king, but you know how that is. Nobody likes nice in Westeros. He has a daughter, Rhaenyra, and his wife is currently pregnant with what he is sure is a boy and the male hier to the throne.

Introducing the king’s council because they’re planning a jousting tournament in honor of the baby prince’s birth. His council is led by Otto Hightower, and some other key players are Lord Corlys, husband to the almost queen, Rhaenys, and Viserys’s younger brother Dameon

Speaking of Dameon, he couldn’t be bothered to be at the council meeting, but we’re introduced to his character sitting on the throne (he’s not supposed to do that), chatting it up with his niece Rhaenyra by the way he also gave her a necklace made of Valyrian steel. If this isn’t foreshadowing, then I don’t know what is.

We then see Rhaenyra in the garden with her best friend Alicent Hightower, also Otto Hightower’s daughter. Alicent is curious if all this throne talk bothers Rhaenyra, but she’s not phased. She rather ride dragonback and have adventures than get stabbed repeatedly by the throne.

SN: Her dad has this wound on his back that’s not healing, but they think it will be ok. This could be his demise in future episodes to come.

King Viserys and  Aemma seem in love, which is different from what we’re used to seeing in Kings Landing. As they have a conversation while she relaxes in a tub Aemma expresses her concern bc it’s been such a challenging pregnancy. She even joked that she might be giving birth to a dragon, but Viserys reassures her.

The name Dameon makes me think Demon, and this guy is fitting the bill. He abuses his power as the city watch commander and encourages his men to help clean up the city. In doing so, we have one the bloodiest scenes in the show, with hands being cut off, castration, and a beheading. Dameon is showing signs of evil and even shows up to the next council meeting with the blood of his victims still on him. Otto is not here for it and lets it be known. These guys don’t like each other.

It’s time for jousting and child labor. What started off as a regular match ended brutally. A lot of testosterone riding on these horses, and tension is high. Dameon purposely chooses Otto’s son to joust with first. After cheating and tripping his son’s horse. He slams to the ground and is out of the tournament with great injuries.  Back at the castle, King Viserys walks in to aid his wife during child labor only to be told the baby is breached, and they (maesters and midwives) tried everything. He must make a choice. Lose them both or save the child. He painfully chooses the child. With no regard for what the queen wants, she’s held down unwillingly and is being cut into. No anesthesia and losing a lot of blood! And if that wasn’t enough blood, we go back and forth between this cesarian and jousters losing their cool and brutally killing one another. Next scene, please!

Fire Will Reign The Throne

King Viserys went through all that, only to lose both mother and child. Talk about devastation. A joyous time is now a funeral. Surprisingly, Dameon tells Rhaenyra that her father needs her, and she’s reluctant to do this because she is not a son. But she steps up, and Rhaenyra looks at her father before she gave the command to her dragon to light her mother and brother a blaze.

King Viserys is a shell of himself, and Otto thinks it’s a good idea to send his daughter to his chambers at night to help him feel better. Get Otto out of here with that. When Alicent shows up, the beauty of the scene is she comes baring a big book to read to him. The book was symbolic of her boundary and having a wall between him and her. Also, the king never asked for this visit and was not remotely making any advancements.

Remember earlier when I said Dameon and Rhaenyra talking at the throne was foreshadowing? Well, now that the prince has died, it comes down to Dameon and Rhaenyra, who will sit on the throne after King Viserys? The council seems split on whether the successor should be his daughter or brother. Some think a young woman on the throne doesn’t value tradition, and others think Dameon is too unstable, but King Viserys decision becomes easy after he finds out (from Otto) that his brother was making light of his nephew’s death by calling him “heir for the day” in a speech at a brothel.

That did it! King confronted his brother, and Dameon didn’t deny it, so the king asked him to leave Kings Landing and go home. At the king’s request, Rhaenyra comes to the Red Keep’s cellar, where he lets her know she will be Queen. He also burdens her with a secret she must keep about the future of the kingdoms. Later they have the ceremony, and now we have Queen Rhaenyra, who will eventually sit on the throne.

No real characters are jumping out at the moment, and no way to tell if this prequel will be as alluring as the one that came before it. However, one thing that remains consistent is the harsh reality that this throne will bring death, deceit, and destruction. This is one episode, so allowing the rest of the story to unfold is a must.