This autumn season may just get a little more interesting as Disney announced their latest update for its Plus subscribers.

If pumpkin spice and the crisp cool air were not enough to cozy up with family and friends indoors, now Disney+ users will have the ability to stream movies and TV series as a group.

To use this new feature you must be a new or an existing Disney+ subscriber as well as those you invite to a group watch. Due to ongoing pandemic restrictions, the app created a space to allow people to gather while being elsewhere.

According to Disney’s online Help Centre, “GroupWatch is a feature that lets you watch any title on Disney+ with your personal friends and family virtually through the app. GroupWatch will sync your streams so that you can easily watch together, even when you’re apart.”

To start a GroupWatch, you would need to launch the application on a mobile device or web browser. This includes the host selecting the movie or series desired, and then sending out invites via text, email, or social using the link provided. 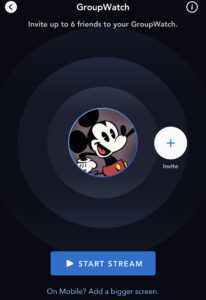 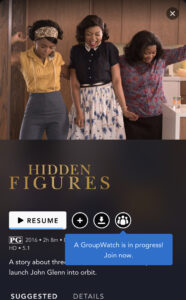 will appear during a title selection screen, with the following as a time to invite up to 6 viewers to join.

Once guests arrive, both you and they have the option of either continuing the stream on mobile or cast to the Disney+ app on your smart TV.

Perhaps the most exciting aspect of this update is that all viewers have the ability to “react” to the content they are watching. Imagine tuning in to a live stream on Facebook and your screen suddenly erupts in likes, loves, or emoji expressions —the same can now be done in GroupWatch.

Although the feature is non-accessible on devices such as “PS4, some Roku models, and some Fire TV models,” everyone in your tribe can control what’s on the screen.

Now we can all pause to cry during a devastating scene, or rewind to have another good laugh.