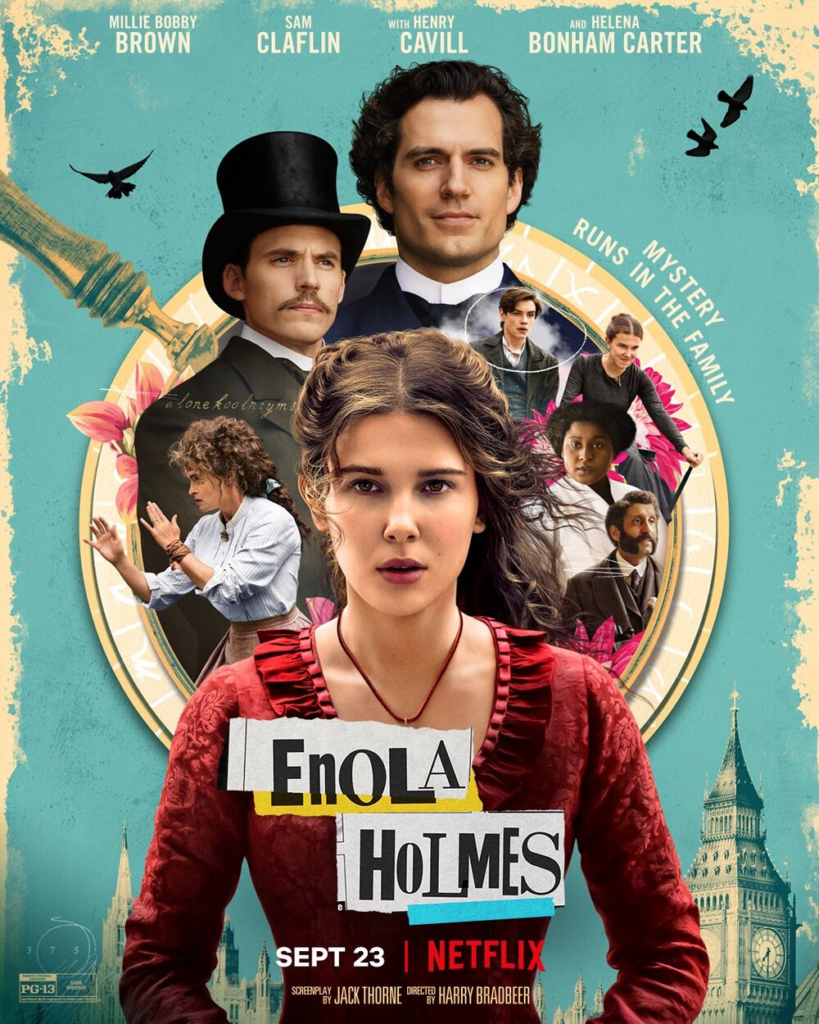 Enola Holmes is a story about a young girl’s search for her missing mother. Enola is Sherlock Holmes’ sister, who uses her skills to outsmart her big brother and legend. This is a Netflix film directed by Harry Bradbeer starring Millie Bobby Brown as Enola Holmes. Alongside Brown are costars Henry Cavill, who plays Sherlock Holmes, and Sam Claflin as Mycroft Holmes.

The film begins with a short backstory of Enola Holmes and her adventures with her mother, Eudoria. Her mother teaches Enola everything from chess to Jujitsu martial arts, and encourages her to be an independent thinking young woman. She wakes up on her sixteenth birthday and suddenly her mother is gone—leaving behind only a birthday gift. Enola goes to a train station to meet Sherlock and Mycroft Holmes to tell them of the disappearance. Mycroft wants to send her away to finish school and she runs away. She meets a boy running away from his family as well, and they go on a big adventure of self discovery.

This movie’s directing style had Enola breaking the fourth wall a lot in this film. I don’t think that choice worked well for the story that this movie was trying to tell. This film had a lot of moments where Enola would stare at or communicate with the audience, but ultimately this was a bad choice in my opinion. I felt it was overused in an effort to keep the audience interested. The story line would have been more fluid if not for the character’s frequent interactions with the audience. On the other hand, the action and fight scenes were really good. I loved the way they were choreographed, and it was awesome to see a little bobbing and weaving.

The acting in this movie was fine for the most part. I think that Millie Bobby Brown is a very talented actress, and she was able to carry this movie. She conveyed genuine emotion in a lot of her scenes. Brown was also able to be witty when Henry Cavill, as great of an actor as he is, did a poor job of being the usually witty Sherlock Holmes. He really gave Sherlock no personality and flair like previous interpretations.

Sam Claflin, who plays Mycroft Holmes, overacted a lot to me it often felt like he was in a whole different movie. I know that in this time period it is hard to reenact something that we have very little remembrance of, but when he was extra animated it seemed like he was out of place. Other than the main stars of the film the supporting characters were fine.

The writing was the biggest problem. The backstory didn’t really add up. There were so many plot holes in this movie. I also had a big issue with the social commentary surrounding Enola’s identity. The writing made it seem as if she exists just because she’s a woman. Enola had a lot of cringe-y dialogue that was meant to convey that she is a strong woman. The way you write a good strong female character is by showing us how strong she actually is. There were plenty of moments in the film that could have capitalized on an opportunity to display her heroic nature. Enola Holmes was already being observant, and she is clearly intelligent, but we did want to hear it.

Enola’s relationship with Sherlock was good; she clearly had an admiration for him and what he does as London’s favorite detective. Enola’s relationship with Tewkesbury was also good and I enjoyed seeing those two interact. They both felt they were undervalued. This felt like more of the meat of the story, and why she was going on the journey. I was okay with the romance between them; even though I probably could’ve done without it. Thankfully, they didn’t have too many awkward gazes in there.

All in all, Enola Holmes has some moments of compassion, but it didn’t really hit the mark story wise. This movie is honestly a forgettable one but I think kids will have fun with the overdramatic tones and fun action scenes. So adults if you’re looking for a compelling story this might not be the movie to sink your teeth into. I would instead recommend it with children and maybe they’ll find it interesting.