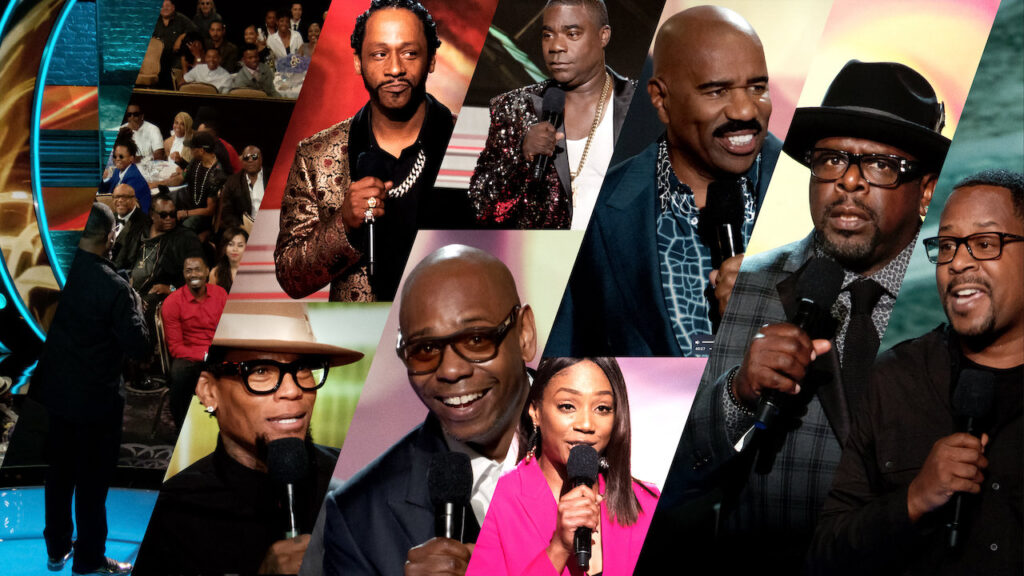 I’ve been watching stand-up comedy for as long as I can remember. Long before it was age appropriate and long before I understood most of the punch lines.

This was the only time my older brother allowed me into his room. He had his own television and we would watch Def Comedy Jam in secrecy since our parents didn’t approve.

Years later, with the 90’s over and stand-up now making a sort of reemergence, I’ve recognized how much I appreciate the genre as an art form and one of our least unbridled forms of expression.

I frequently quote comedians in academic spaces. There’s a joke about everything, but more importantly, humor offers us a prism through which we can view life from multiple different perspectives. It catches you by surprise and you find yourself laughing at uncomfortable issues that will burrow themselves in the corner of your mind and stay there long after the punchline has been delivered.

The best comedy does this. And this type of comedic writing has allowed me to unearth some of the nuances of Black life.

It was actually difficult to condense this as there are loads of comics and specials I could talk about for hours. This short, topic form list is just a few of the brilliant, hard working comics who have had amazing careers and who I constantly watch when I want to laugh to keep from crying.

“Police got a choke hold they use out here though, man they choke n-ggas to death. That mean you be dead when they through. Did you know that? [looks into the crowd] Wait a minute, n-ggas going ‘yeah we know’, white folks, ‘no, I had no idea’”.

Richard Pryor was a master in his craft. This is 1979. I’m both speechless and disgusted that this still speaks to our social climate.

“I know Jesus was black because they couldn’t find a place to stay. They was like, ‘y’all can come in but that n-gger baby gotta sleep in that puppy bed outside. Keep him in that manger over there if you insist on having that Black baby. I don’t trust it.’”

This special is one of the best Netflix has to offer. Che proves that he can do a lot with his brand of humor and there’s quite a few moments where he surprises you with his insight, even if the joke is highly offensive such as this one.

This bit about Jesus being turned away at the inn unearths a sort of deep rooted global anti-blackness and discrimination that could spawn discussions on a whole host of issues. I’m particularly struck by, “if you insist on having that Black baby” as hearkening a suggestion that furthering black existence is not desirable, but we insist on doing it anyway. Black conception is resistance.

“There was a study…it showed that doctors, they actually prescribe opioids frequently to white people than they do to black people. They don’t give us opioids. ‘Cause they’re sympathetic, they’re like, ‘aww this white person, they’re in such pain. I hate to see white people hurting…let me give you these opioids. Get that pain away’. They don’t give us the opioids. They’re like, ‘ahh you can take it, walk it off!’”.

Sykes doubles down on this joke by adding that she was “prescribed” ibuprofen after her double mastectomy. The crowd gets a real kick out of the this, but she’s talking about some serious stuff here; especially in relation to the crack epidemic. Comics disarm us with a punchline, so we often don’t realize that we’re laughing at someone’s reality. Black people’s expendability is realized at all sorts of encounters: in healthcare, with law enforcement, with white women, with white men. In every possible way we are treated as if Black humanity doesn’t matter.

Its not fair to have to write this because the actual performance is incomparable. This bit is absolutely hilarious and Paul Mooney’s delivery and timing is genius. The debate around the “n” word is endless; the only thing we can manage to agree on, for the most part, is that non-Black people should not use the “n” word.

I think Mooney is doing three things here. First, by saying that white people created that word and its “too bad” that they can no longer use it, Mooney highlights that though Black people have taken possession of the “n” word it still maintains its contextual meaning. That context is: Black people were once enslaved by white people and treated as sub-human. There is no scenario where white people can use that word and it doesn’t invoke that context. None. Don’t ask for permission from your Black friends. Don’t argue that its “unfair” or a violation of free speech. Don’t say you’re singing along with Kendrick Lamar.

Telling Black people when it’s appropriate to use the “n” word or not to use it at all is also offensive. This is privy to white society creating the parameters and language by which Black people can define themselves. That should be Black people’s choice.

And lastly, I think Mooney thinks there are plenty of instances where white people say the “n” word any way. And we know that’s true, don’t we?

Dave Chappelle: Deep in the Heart of Texas, 2017

“…I will support anybody’s right to be whoever they feel like they are inside. I’ll be an ally in that. However, my question is, to what degree do I have to participate in your self-image. Is it fair that I have to change my whole pronoun game up for this motherf-cker…seriously. If I put on an argyle sweater and I’m like ‘hey, everybody I feel like a white guy in this sweater and I want some god-d-mn respect and a bank loan,’ that’s not gonna work. You don’t give a f-ck how I feel, why should I give a f-ck how you feel. N-gger’s a pronoun!”

I’m just going to leave this one right here.

Its no secret that Chappelle has had feuds with the transgender community. Some of his Netflix specials feature bits where this community is the brunt of the joke. It seems personal—I believe he’s clarified that it’s not. I think Chappelle is frustrated that Black people, particularly Black men, are not afforded the grace to publicly negotiate their identity and live full lives. But this is complex and definitely deserves a full discussion—if we are even ready to have that conversation.

I think what I continue to enjoy about stand-up comedy is that it doesn’t wait for us to be ready to have the conversation. It remains at the forefront of the culture—extracting the ugly things we try to bury, and relishing in the tension of subject matters we try to reconcile.

I urge you support all forms of Black expression. Jokes are jokes of course. I definitely watch just for the entertainment and end up with whole new theories on Black life. I don’t suggest that we turn art into what it isn’t, but simply to appreciate it for what it is. Jokes. Life. Meta. Satire. Critique. Everything. Nothing.

Black art and Black stories are so important. Even in the fight for liberation and equality we trust our artists to mirror our struggles, triumphs and hope for a better tomorrow.